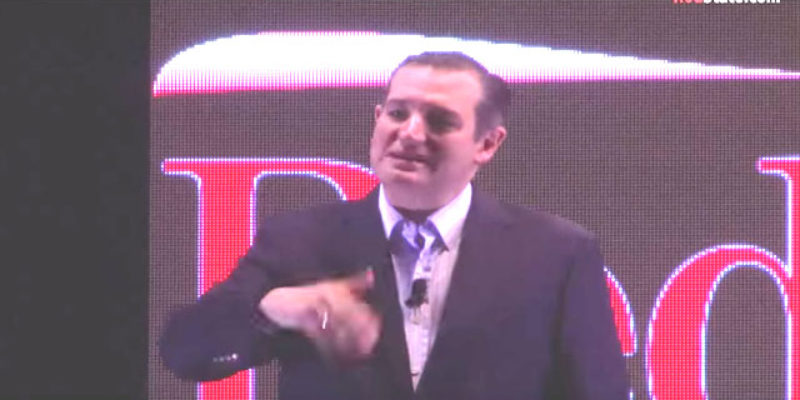 RealClearPolitics has this piece by Mark Salter up, a former McCain speechwriter.

Although I find Sen. Ted Cruz’s “lonely man of principle” act as tired as it is phony, I should give the devil his due. Cruz has given Americans exasperated with Washington gridlock hope that Congress can, when sufficiently motivated, find consensus and act.

In this instance, the consensus is that Ted Cruz is a jackass. The bipartisan action taken was to deny him a vote on the Senate floor, and the additional speaking time he desired for another unctuous tribute to himself, courtesies that are routinely granted all senators. But hey, it’s hard to get Democrats and Republicans to agree on anything these days. So, congratulations, Senator Cruz, you trailblazer.

I worked on Capitol Hill for the better part of two decades. There might have been other occasions when a senator couldn’t get a colleague to “second” his amendment, but I can’t recall any. It’s also unusual for senators not to agree to give a member who has exhausted his allotted speaking time a few more minutes to finish his remarks.

Then again, I can’t recall any senator who was as nearly universally loathed by his colleagues as Cruz. There have been others who weren’t likeable. There were plenty who were self-interested and who preened and blustered as often as Cruz does—and who routinely elicited senatorial smirks and rolled eyes. There have been senators who frequently forced their colleagues to cast difficult and unpopular votes. And, of course, there is a long list of senators who ran for president and treated the Senate floor as a campaign stop. (And for some of them it worked). But no senator in my memory did all that with such abandon and was disliked with as much intensity as is Ted Cruz.

Say this about Salter: He doesn’t mince words.

I have some exceptionally conservative friends who share Salter’s thoughts, however, and I see merits to both sides here. On the one hand, Cruz is a stalwart for conservative causes and has positioned himself very well as the standard bearer of conservatism. At the same time, however, I winced when he officially announced his run for president, as to me it posed a risk to his credibility among the more moderate elements (true moderates, not the liberals in D.C. who call themselves such) who would suddenly he his stances as posturing for higher office before he has completed a term as Senator.

Remember, we had just seen the same thing from an Illinois Senator.

Cruz is confrontationl, controversial, and proud of it. I love him immensely as a U.S. Senator because of what he brings to the table. But his run for president has burned many bridges, and his all-or-nothing approach in openly calling Mitch McConnell a liar (I do not dispute that he is a liar, mind you) has clearly cost him the ability to form conservative coalitions within the Senate.

Ted Cruz is awesome, and I think Salter speaks of him too harshly, but there is little doubt that his colleagues are now completely unsure as to whether Cruz is genuine in his appeals or using the Senate floor as free advertising for his campaign. He may need to be careful this next year in the Senate.

Interested in more national news? We've got you covered! See More National News
Previous Article The Problem On Capitol Hill Is A Lack Of Competence, Not Insufficient Ideology
Next Article The Grumpy Voter’s Guide To The First Televised Louisiana Governor’s Debate