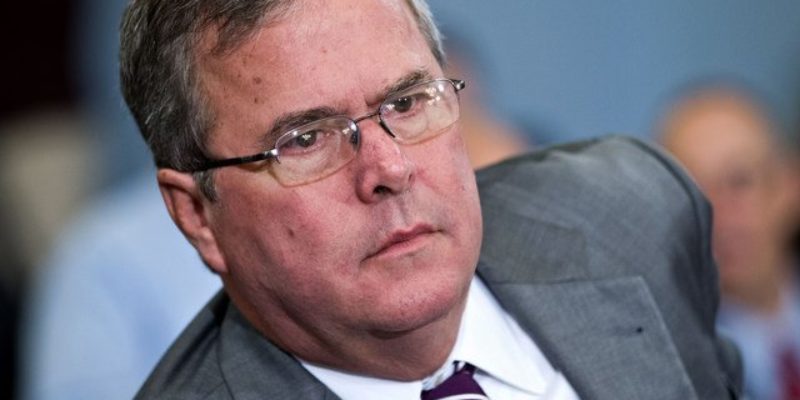 Remember back in 1999 when all of those politicians- state legislators, congressmen and party leaders made pilgrimages to Austin to beseech then-Texas governor George W. Bush to seek the presidency?

Bush advisor Karl Rove’s Governor’s Mansion front porch strategy was straight out of William McKinley’s playbook as it created not only an aura of greatness around Bush but also inevitability, launching a stampede to get on board before the next delegation visited.

The media flocked to the Texas capital cover these trips by politicians and Bush’s opaque response to such flattering courtship, a pseudo-disinterest that only fueled the Bush fervor.

Bush was more than a brand.

The son of a widely respected former president whom many American had later regretted having voted out of office; a landslide reelection in a large state that was not very reliable for the GOP; sky high poll numbers across the country that were based off of a carefully crafted narrative bottle-fed to the media; the anticipation that his campaign would be well-funded. And one of his younger brothers was governor of Florida.

The national Young Republicans had so solidly fell in line behind his candidacy that at no time did he even bother addressing them as a candidate (or for that matter, later as a president).   Social conservatives were herded into his stable by former Christian Coalition executive director Ralph Reed.

It seemed certain that Bush was going to be the nominee and, after slamdunking Al Gore, president.

The Texan would end up needing every single one of those advantages to turn back Arizona US Senator John McCain’s maverick candidacy, which had embarrassed Bush in New Hampshire and stunned him in Michigan and Arizona- the latter thanks to absurd expectation gaming by an operation that had grown arrogant.

Had South Carolina played out differently, there’s a good chance that Bush would either been forced out the race or that the nomination would have dragged out longer- and when considering the closeness of the general election, additional time fighting for the party nod may have tipped the scales to Al Gore.

Sixteen years later, brother Jeb finds himself in a much different position than his older brother.

Though Jeb has money and an organization, his network pales in comparison to what W had going for him.

There have been no pilgrimages. There are no astronomical poll numbers. And there definitely is no sense of inevitability.

While W benefited from the universal esteem that his father enjoyed, Jeb’s effort is weighted down by his brother’s unpopularity. Though a former president, the 43rd president’s involvement has been low-profile and sporadic, being wheeled out in discreet, secure settings, preferably intimate gatherings comprised of big-dollar donors.

From the summer of 1999 through March 2000, George W. Bush’s poll numbers amongst Republican voters fluctuated between a low of 59% to a high of 68%.

Iowa, where George W. Bush had a statement victory that helped sustain his campaign through the early setbacks, is not within reach for Jeb, where he is currently in fifth place with 5%, trailing Donald Trump, Dr. Ben Carson, Florida US Senator Marco Rubio and Texas US Senator Ted Cruz.

The Granite State of New Hampshire has been touted as Jeb’s firewall, though it could end up being a crematorium.   In the state where W got trounced by 18-points, Jeb is in distant third with 8%.  He’s in fifth place in South Carolina.  Same story in Nevada, the most junior of early states.  Despite Bush’s popularity with Hispanic voters he has not attracted much support in the Silver State.

The Bush family has fared well in the previous five Republican presidential contests they entered, winning four and performing strong enough in the 1980 primaries to receive the veep slot as a consolation prize.

Jeb is more likely than not to walk away from the 2016 nomination fight empty-handed, the family brand tarnished.

And a meltdown won’t help the most prominent member of the fourth generation of Bush politicians, Jeb’s son George P. Bush, the current Land Commissioner in Texas.

The talk of Jeb being the “smart” one is an ugly backhanded comment at the overly abused 43rd president and untrue: W won his gubernatorial election in 1994; Jeb needed to two tries to bag his governorship.  And watching the way W glided through the primary process while Jeb has repeatedly tripped like Dick van Dyke in the opening credits of his television show doesn’t help that narrative any.

While the older Bush sibling casually brushed off attacks and sniping as if he were knocking dust off his boots, Jeb is curt and has an angry edge in his tone, as if he is perturbed how the nomination matter hasn’t already been settled.

There’s neither a clear path to the nomination nor the White House for Jeb Bush.

In fact the only way Bush has a shot at winning the nomination is by carpertbombing the Republican field through aligned Super PACs. That strategy helped Romney secure the necessary delegates but also angered plenty of conservative voters who viewed the general election not as a choice between voting for Romney or Obama but voting at all or staying at home.

Napalming his fellow Republicans won’t make Jeb any more popular with Republican voters, during the primaries or in the general election, but will just result in the reallocation of anti-Bush votes to the least damaged challenger and a depressed Republican turnout in November.

It’s time for Jeb Bush to recognize the obvious political disposition of the GOP and the country and end his quixotic campaign.