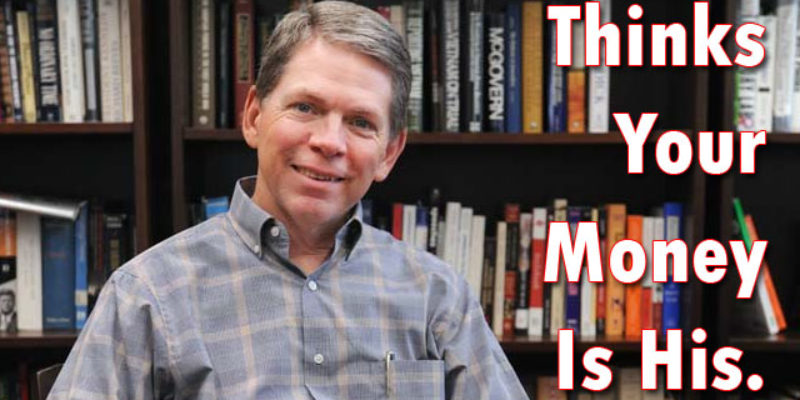 If star players could be persuaded to demand greater funding for our school, the public would listen and respond. Better yet, if your lobbyists could persuade the football team to threaten a strike until the governor and legislators fully fund the university, we could achieve transformational change.

I know this sounds crazy but look no further than the University of Missouri. To be sure, the issue in Missouri was different. The question there was the university’s reluctance to address campus racism. Despite student protests demanding the resignation of the school’s president, nothing happened until the football team threatened a strike. Then, the president was gone within days. The football players and their coach pushed him out. The lesson of Missouri is clear: When a football team speaks, the public listens.

Let’s face reality: Many fans don’t care about the quality of LSU’s academic programs. They don’t care if the school cannot attract and retain top professors. They don’t care that many young people are leaving Louisiana for schools in other states because of uncertainty about our higher education system.

What people do care about – and deeply – is college football. In fact, many people support LSU’s academic mission only because they know that hiring a few hundred professors and instructors is the price they must pay to field a football team. As you and I know, many fans regard our institution as a sports enterprise with History and English departments on the side.

Mann is suggesting, one surmises half-jokingly, that if Leonard Fournette and Les Miles were to go on strike and not play the 2016 football season in the fall unless the legislature made all of F. King Alexander’s funding dreams come true in the spring, that LSU would get what it wants from the state legislature.

And the theory behind this is that Louisiana is full of stupid people who don’t care about education and couldn’t give a damn about LSU other than the football team.

Mann thinks, apparently, that beating these people over the head by denying them their precious football will force them to contact their state representatives and open the floodgates out of their bank accounts.

And he knows that his boss F. King Alexander is already the Boy Who Cried Wolf after his histrionics last year about academic bankruptcy, which tubed a bond issue and nearly dragged the Securities and Exchange Commission into an investigation of the university’s finances but did pressure the legislature into raising what they thought would be $700 million in taxes (surprisingly, that figure didn’t materialize – as projected revenues from tax hikes never do). So simple yelling and screaming won’t work anymore. Everybody knows that.

Know what else won’t work? This attitude.

On the Friday before the LSU-Texas A&M game, you announced that you had hired Richard Koubek as LSU’s provost, the top academic official for the Baton Rouge campus. No one cared. Only two newspapers in the state, one of them The Daily Reveille, published anything about it.

That appalling apathy about scholarship means we must leverage the public’s affection for football to save academics. You’ve been wasting time lobbying Sen. John Alario and Rep. Jim Fannin when you should have been lobbying Les Miles and Leonard Fournette.

Imagine the widespread panic that would sweep across Louisiana if the football players announced that they won’t play the coming season unless the governor and the Legislature find the revenue to put LSU and the rest of higher education on sound financial footing?

This is a plan that will work. And the best part is it won’t cost nearly as much as it would cost to lobby legislators. As you know, many of the lawmakers we must persuade won’t listen to your arguments until you’ve made a campaign contribution or fed them a steak at Ruth’s Chris. However, in the endeavor I am recommending, the NCAA is your friend. As you know, unlike with lawmakers, you can give players very little in return for their services.

No offense to Richard Koubek, but nobody is going to read a story about an academic bureaucrat getting a job. Nobody reads a story about the new chief financial officer at Amedisys or the new marketing director at Raising Canes, or Zatarain’s new quality control officer, either. It isn’t “apathy about scholarship” that nobody cares about Koubek’s appointment; nobody knows who Koubek is and nobody has any reason to think his appointment will change things for the vast majority of the people in Louisiana who are neither LSU students nor have kids who are.

And the idea this fact means Louisiana’s dunces don’t care about LSU and need to have football taken away until they learn shows such bad will and such contempt for the people whose taxes already fund the university – either through the general fund or through the TOPS program – that the lesson it teaches is something else entirely.

Namely, that maybe the entitled jackass professoriate and other squeaky wheels unleashed by Alexander onto the public ought to have their own wings clipped.

Maybe the response ought to be that LSU gets defunded in order to teach Alexander and Mann a lesson – namely, that they ought to be grateful to the people of this state for the resources it has provided them.

Alexander makes a base salary of some $600,000, which puts him in the top 10 percent of all university presidents across the country. That’s an awful lot of money to be paying someone whose employer is supposedly so short of cash. And Bob Mann makes some $130,000 to teach a rather astonishingly small course load when he’s not scribbling nonsense for the Times-Picayune.

These extravagances are possible due to the generosity of those dunces tailgating in the parking lots on Saturdays in the fall, who fork over tax dollar after tax dollar to fund the place without so much as a tip of the cap from the academics, and who fork over for season tickets and parking passes, not to mention exhorbitantly-priced concessions, to fund an athletic department which serves as a cash cow. The dunces Mann bitches about and muses about denying their entertainment don’t generally make what Mann makes, much less what Alexander makes. And they aren’t complaining about the encroachment of campus leftism at LSU or the rather shocking waste of university resources on mismanagement and foolish programs which occasionally dent the news cycle.

This bitching all goes one way.

Never do you hear from Bob Mann that any of Louisiana’s superfluous minor university campuses be consolidated so as to marshal resources for LSU. Never do you hear suggestions for how LSU can be better managed in order to put more of its “scarce” (the university has more gross revenue coming in than ever, despite the constant screaming for more) resources into the classroom or the lab. Never do you see suggestions for savings in the state budget that could be applied to higher education.

All you hear from Bob Mann, his colleagues and his boss is a demand for more money out of your wallet.

LSU doesn’t have a money problem. LSU has a leadership problem. F. King Alexander has shown that to be true in his own actions, and to the extent that Alexander and his lieutenants continue to put up with Mann’s ridiculous and embarrassing statements of bureaucratic avarice, they’re advertising it in mass media. Indignation toward the taxpayers of the state and protestations of their stupidity calls into question whether anybody up there ought to be drawing a check on the public’s money.

Gov.-elect John Bel Edwards isn’t going to clean house at LSU, other than to appoint a bunch of trial lawyers and Democrat politicians to the Board of Supervisors as the business people appointed by Bobby Jindal cycle off. He would be doing Louisiana a service if he did, though.