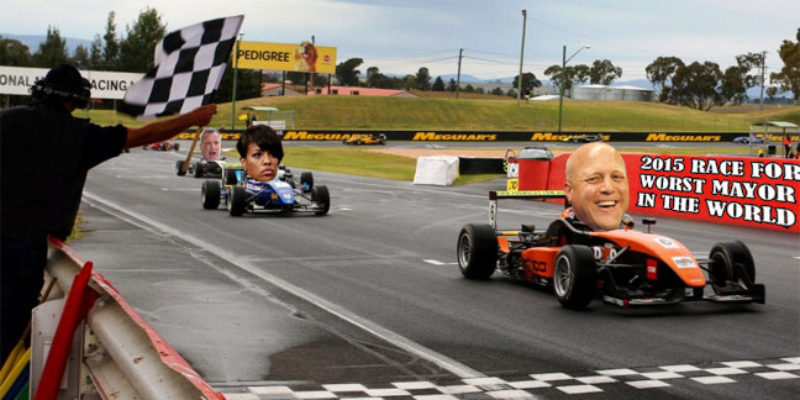 Updated and re-posted from June 24.

Robert E. Lee was a far, far better man than Mitch Landrieu, and therefore it is no particular surprise that New Orleans’ squalid, petty mayor – whose record in governance shows endemic corruption and incompetence so basic that simple things like potholes go untended and violent crime has begun to threaten the very fabric of society – would make it his project to tear down the monument to Lee from the center of the circle which also bears his name.

Landrieu, the scion of a fading New Orleans political dynasty known mostly for crony capitalism, usurpation of power and self-dealing graft, has seen his stock fade badly in the past year as the  strong New Orleans economy he inherited from Ray Nagin has gradually slowed – at the same time that a crime wave of such force as to cause a panic across the Crescent City has gone unchecked by the police force broken by Landrieu’s having brought the Justice Department in to “reform” it.

Amid the mounting evidence of his failure in office, some effect of which is that Landrieu was once almost openly bragging of his ability to beat David Vitter in the governor’s race this fall and is now long since forgotten as a candidate, the mayor is now attempting to pander to the Democrat base voters in that city by jumping on board the vulgar politically correct train and demanding a removal of the Lee statue in downtown New Orleans – a train that pulled into the station today as that city’s governing body voted 6-1 to embrace the crowd of vandals and leftist masterminds who initiated the effort to destroy its tourist landmarks of Confederate vintage.

Landrieu said that taking the Lee statue down would be done in pursuit of “unity,” which is laughable considering who Robert E. Lee actually was.

Yes, Lee fought for the Confederacy. If that’s all you know of the man you are ignorant of American history and unqualified to make decisions about preserving it. You are on the same level as the barbarian goons from ISIS who destroy monuments and historical artifacts not fitting their 7th-century interpretation of Islam, or the Taliban who obliterate the Buddhist statues at Bamiyan.

Or, in a slightly more modernist context, the Soviet-era apparatchiks busily airbrushing the images of the personae non grata from official photos during Stalin’s time.

Robert E. Lee is, for those who aren’t ignorant of the man and his story, a quite unifying figure. Lee could easily have gone out in a blaze of glory, or taken to the wilderness and fight on as a guerrilla insurgent commander piling up bodies and continuing the Civil War to almost endless slaughter. He did none of that, despite having his personal fortune taken away and his post-war prospects limited to penury and shame. He had little personal interest to be served by surrendering at Appomattox Courthouse, but that’s what he did. Why? Because for Lee, continuing the war when it was lost would have been morally wrong. And upon his surrender he pledged himself to reconciliation between North and South.

Reconciliation. Get it? As in, unity?

Here’s a story illustrating that, unlike the cheap words we expect and are delivered from tawdry politicians like Mitch Landrieu, that pledge was backed by integrity, courage and action…

It was a warm Sunday at St. Paul’s Episcopal Church, and an older man, one of the church’s many distinguished communicants, who had spent the last four years in war, was sitting in his customary pew. With his shoulders rounded, his middle thickened, his hair snow-white and beard gray, as usual, he attracted the attention of the rest of the church. But then so did another parishioner.

As the minister, Dr. Charles Minnergerode, was about to administer Holy Communion, a tall, well-dressed black man sitting at the western galley (which was reserved for Negroes) unexpectedly advanced to the communion table-unexpectedly because his this had never happened here before. Suddenly, the image of Richmond redux was conjured up-a flashback to prewar years. Usually whites received communion first, then blacks-a small but strictly adhered to ritual, repeated so often that to alter it was unthinkable. This one small act, then, was like a large frontier separating two worlds: the first being that of the antebellum South, the second being that of post-Civil War America. The congregation froze; those who had been ready to go forward and kneel at the altar rail remained fixed in their pews. Momentarily stunned, Minnergerode himself was clearly embarrassed. The horror-and surprise-of the congregation were no doubt largely visceral, but Minnergerode’s silent retreat was evident. It was one thing for the white South to endure defeat and poverty, or to accept the fact that slaves were now free; it was quite another for a black man to stride up to the front of the church as though an equal. And not just at any church, but here, at the sanctuary for Richmond’s elite, the wealthy, the well-bred, the high-cultured.

The black man slowly lowered his body, kneeling, while the rest of the congregation tensed in their pews. For his part, the minister stood, clearly uncomfortable and still dumbfounded. After what seemed to be an interminable amount of time-although it was probably only seconds-the white man arose (Lee), his gait erect, head up and eyes proud, and walked quietly up the aisle to the chancel rail. His face was a portrait of exhaustion, and he looked far older than most people had remembered from when the war had just begun. These days had been hard on him. Recently, in a rare, unguarded moment he had uncharacteristically blurted out, “I’m homeless-I have nothing on earth.”

Yet these Richmonders, like all of the South, still looked to him for a sense of purpose and guidance. No less so now as, with quiet dignity and self-possession, he knelt down to partake of the communion, along with the same rail with the black man.

Watching Robert E. Lee, the other communicants slowly followed in his path, going forward to the altar, and, with a mixture of reluctance and fear, hope and awkward expectation, into the future.

Lee’s sterling reputation among his contemporaries came from selflessness. For example, while commander of the Army of Northern Virginia he freed his family’s slaves at great cost to his personal fortune; to do so left him largely penniless. The war cost him his family’s lands as well; what is now Arlington National Cemetery was actually Lee’s estate and in what was seen as a grave insult the federal government decreed it would be a graveyard for the Union’s dead. He made no complaint about that decision, and quietly accepted a position as president of Washington College, which is now known as Washington & Lee University, in order to help mold the next generation of Southerners to be good American citizens.

As to slavery, Lee despised it, and openly so. He shocked many in the Southern upper class when he said…

So far from engaging in a war to perpetuate slavery, I am rejoiced that Slavery is abolished. I believe it will be greatly for the interest of the South. So fully am I satisfied of this that I would have cheerfully lost all that I have lost by the war, and have suffered all that I have suffered to have this object attained.

This was a great man who chose to fight for a doomed, and damned, cause. His choice was not an enthusiastic one. He was not a great believer in the Confederate cause, but he could not bring himself to fight against his family, neighbors and friends…

With all my devotion to the Union and the feeling of loyalty and duty of an American citizen, I have not been able to make up my mind to raise my hand against my relatives, my children, my home. I have therefore resigned my commission in the Army, and save in defense of my native State, with the sincere hope that my poor services may never be needed, I hope I may never be called on to draw my sword…

This after Lee was offered the position of supreme commander of the Union Army by President Lincoln, which for his personal purposes would have been a far more plum assignment than that of a startup, undersupplied rebel army defending a quickly beleaguered fledgling nation.

Lee acted against his personal interests out of a sense of duty and honor. When has Mitch Landrieu, who builds streetcar lines and gets tax breaks for real estate developers, so as to benefit his own bank-book, ever done the same?

America, and New Orleans, is in the deplorable shape it is currently in because our modern society produces Mitch Landrieus when we desperately need Robert E. Lees. No wonder the memories of great men are brought low by the petty hacks from whom we are forced to choose as our leaders.

And by the by, Southern University has named its School Of Public Policy after a communist terrorist who oversaw the murders of thousands of white people. As a gesture of unity, shouldn’t we demand that Nelson Mandela not be memorialized in such a way?