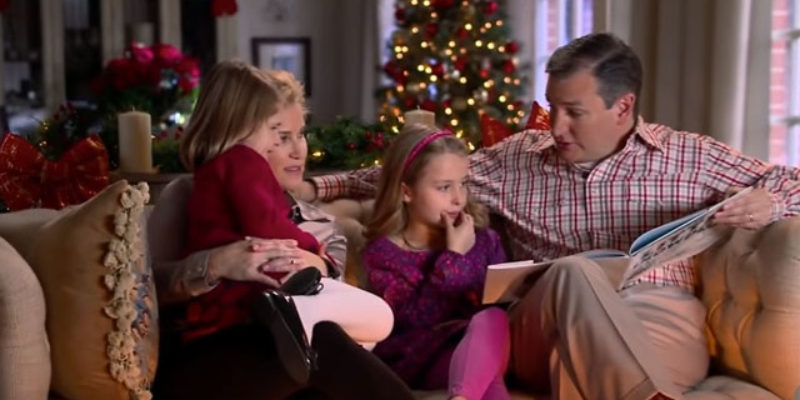 It ain’t not the funniest thing you’ll see during this election cycle, but it’s funnier than not.

Since Donald Trump got to host Saturday Night Live and Hitlery has been on there as well, NBC now has gotta give all the other candidates equal time. So unlike Huckabee and Kasich, who apparently are doin’ standup shots in front of the camera and tryin’ to be funny, Cruz’ campaign decided to do a fake Christmas books ad that takes shots at errybody.

Like Lois Lerner who audits Santa Claus. Or John Boehner who’s Frosty the Speaker of the House, and carries around a cigarette and a glass of wine. Or Hitlery, who’s The Grinch Who Lost Her Emails.

It’s cute, but it’s a little mean. That’s OK for Saturday Night Live, because that’s pretty much how SNL rolls these days. Cruz is gonna want to do something self-deprecatin’ at some point to make himself more likable. That likability thing is what’s standin’ in his way – I hear people say he comes off as fake, though I hear other people who actually know him say he’s the least fake guy in politics. The way you get past that is you acknowledge your faults to an extent. Which he didn’t do in this ad, but that’s all right.

By the way, have y’all noticed that while Jeb Bush and Marco Rubio have been all over the airwaves for the last two months, Ted Cruz and Donald Trump are not? Cruz is running ads in Iowa, but not nationally. In Iowa he’s basically wrapped it up. He’s catchin’ 40 percent in the latest poll out over the weekend.

Those must be some good ads he’s runnin’. Maybe if he runs ’em nationally he’d catch Trump. But Cruz is pretty disciplined with his money, unlike some of thee other guys.