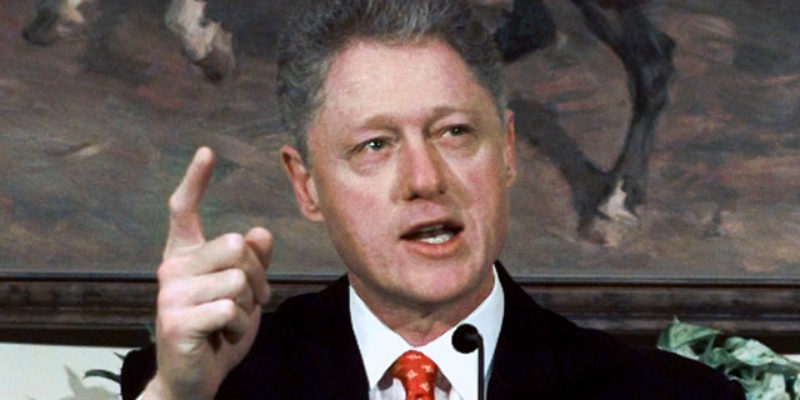 Bill Clinton is a legendary politician, a former Arkansas Governor and two-term President. He survived impeachment proceedings and left the Oval Office with a very high approval rating. Since that time, he remained in the public eye through a full schedule of lucrative speeches and the work of his non-profit foundation. He should be enjoying retirement and the riches that are associated with a career as a successful politician.

Instead, he is facing increased scrutiny and more disapproval for his scandalous behavior and mistreatment of a variety of women. Along with being involved in consensual extra marital relationships with numerous women, Clinton has been accused of abusing several women and committing serious crimes of a sexual nature.

The gravest charge is rape, alleged by former nursing home administrator Juanita Broaddrick. He is also accused of sexually harassing and exposing himself to Paula Jones, a former Arkansas state employee Clinton paid $850,000 in a legal settlement. Kathleen Willey, a former volunteer in the White House and the Clinton campaign, maintains that Clinton groped her in the hallway adjacent to the Oval Office. She also asserts that Clinton tried to keep her quiet by sending a thug to intimidate her and killing her beloved cat.

In the infamous impeachment scandal, he lied to the court and to the American people about being involved in a longstanding sexual relationship with a young White House intern. In the case of Monica Lewinsky, Clinton took advantage of a 22 year-old girl, a behavior that would lead to the firing of any Fortune 500 CEO today. In contrast, Clinton survived his affair and the lies he told to cover it up because of a sympathetic press, the monolithic backing from fellow Democrats and his wife’s strong support.

In retrospect, Clinton should have been removed from office and possibly imprisoned for his outrageous behavior and outright deception. He not only lied about the Lewinsky affair, he also lied about his affair with Gennifer Flowers. After initially denying the relationship, he was eventually forced to renounce his lies and admit the truth of his adulterous relationship.

As his tawdry behavior was being exposed, Hillary stood by him and led the charge against the courageous women who came forward by attacking their character. These revelations, which would have torpedoed any Republican’s political career, were nefariously labeled “bimbo eruptions.” Two decades later, Americans take these accusations more seriously. Not only are these stories not going away, but Bill and Hillary Clinton are finally begin asked about these scandals by the mainstream news media.

Congratulations to Donald Trump who has made the issue a major talking point this week. He also released a new Internet commercial showing Hillary Clinton with not only her philandering husband, but also with the disgraced former congressman Anthony Weiner and entertainer Bill Cosby, who has been charged with the crime of aggravated indecent assault for a 2004 incident in Pennsylvania.

Cosby, a once beloved comedian, is now facing allegations of a sexual nature from 50 women. He is accused of rape, drug induced assault, battery, child abuse and an assortment of other serious charges. Today, most Americans no longer hold Bill Cosby in high regard, similarly, the reputation of Bill and Hillary Clinton will deteriorate as the women he abused continue to generate media coverage. The younger generation of Americans, typically Democratic Party voters, will be horrified by these Clinton scandals as they finally learn the sordid details.

Thankfully, the courageous women wronged by Bill Clinton are still doing interviews and willing to talk about the atrocities they suffered. For years they have been trying to tell the world about the sexual appetites and deviance of the former President and now they are finally being heard. However, they are not only denouncing Bill Clinton, but they are also pointing the finger of blame at Hillary since she helped to ruin their reputations.

In this environment, it was no surprise that Bill Clinton’s initial foray into the 2016 political arena was a disaster. Along with a haggard physical appearance and a lackluster speech, Bill Clinton did not exude much enthusiasm or energy on the stump this week. To make matters worse, as he was speaking, several women behind him looked troubled and grimaced. Maybe they realized the type of person who joined them on that stage; not a supporter of women, but, in fact, an abuser of women.

In 2016, his enabler in chief, Hillary Clinton, wants to become the first woman President of the United States. To get elected, she will need to maximize support from women across America. Unfortunately for Hillary, her “big dog” Bill Clinton is no longer an asset. In fact, Bill Clinton has become a liability for Hillary and the problem for her campaign will only get worse as the election draws nearer.