We’re not going to make too big a deal about this, but given the damage that deflated oil prices have done to Louisiana’s economy we figured at least some of our readers might like to see something that looks like good news on that front.

And here’s a chart which might – might – indicate good news. Here’s West Texas Intermediate crude at today’s close… 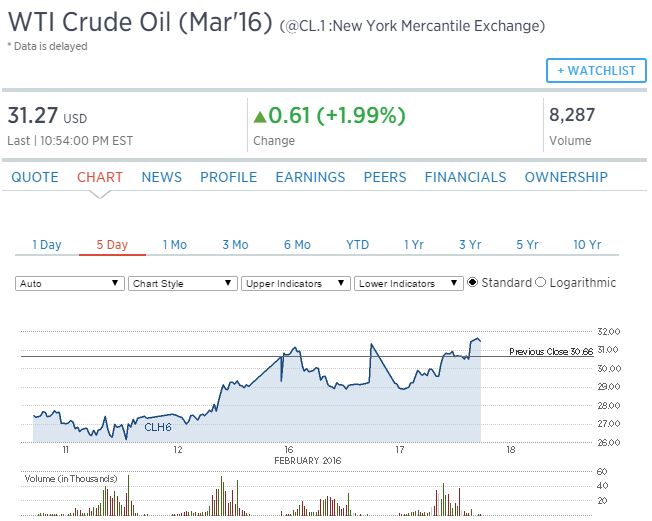 No, this is not a massive runup in prices. It’s merely the indication of something that looks like life.

Wednesday was a huge day for the oil industry, actually this whole week is turning out to be huge. U.S. oil prices jumped nearly 8% on Wednesday following an unexpected massive drop in crude inventories.

Crude inventories fell by a staggering 3.3 million barrels late last week. This is huge news as analysts were actually predicting a gain of 3 million some barrels. This right here folks is a 6 million barrel swing in supply. This what we’ve been waiting for, the massive drawdown is happening. This is big, big news out of the oilfield, and it’s the final piece of the puzzle that would propel the industry back into production creating new oil jobs.

In our recent articles and discussions, we’ve mentioned the final thing that needs to be done is to draw down the supply after we get production numbers under control. Well, it’s here and nobody expected it this fast, not even the industry analysts.

The other big news coming out of the oilfield today is that Iran is actually in favor of putting a freeze on production. Just yesterday an agreement was reached between several OPEC members to freeze production as long as the other big players agreed, one of them being Iran who was said to be most likely uncooperative.

In an unexpected meeting on Wednesday Iranian Oil Minister Bijan Zanganeh met counterparts from Venezuela, Iraq and Qatar in Tehran for a couple hour long discussion about how they all agreed freezing production should be the first step towards stabilizing the market.

“I’m pricing between $35 and $45 for Brent by summer, as we still have a daily surplus of up to 1.7 million barrels of oil to contend with,” said Phil Davis, an independent crude trader at PSW Investments.

“But I don’t see the panic move down below $30 happening again,” Davis said. “That’s just untenable.”

Crude prices have fallen from highs above $100 a barrel with little resistance for most of the past 20 months, thanks to near-record output by the Organization of the Petroleum Exporting Countries and other major drillers such as Russia.

But after hitting 2003 lows beneath $30 last week, prices reversed course, surging about 12 percent on Friday alone after the United Arab Emirates said OPEC was ready to cooperate in bringing production down.

The potential for an oil rebound helped the stock market hit a home run today, and the talk of an OPEC production slowdown isn’t a huge surprise. OPEC countries, and the Russians, have been on a production tear for a while, some of which is a strategic attempt to drive U.S. shale players out of the market – and to an extent that’s been successful.

But the American slowdown in oil production was bound to affect the market at some point, given that the USA is now such an enormous producer of oil. And there is a built-in driver of shrinking oil production; namely that so many OPEC players and others operate on the basis of state-run oil companies which do a lousy job of redeveloping their reserves, and therefore they tend to bleed themselves dry pumping oil out of existing wells. Venezuela would be a sensational example; the Venezuelans have dumped their oil production from around 3.3 million barrels a day in 1998 to 2.5 million barrels a day (or at least that’s the official figure the Maduro government gives; believe it if you want).

And so at some point, when American exploration drops off and investment elsewhere will as well given the low price, you’re bound to see inventories shrink.

And it appears that’s what is starting to happen.

But there’s still a long way to go, and this OPEC production shutdown deal has its detractors. CNBC…

Talks between major oil producers about freezing output shows how painful cheap crude has become, but it is not likely to bring an end to the world oil glut anytime soon.

Analysts caution that the situation is fluid and the outcome still very uncertain, particularly since Iran has not seemed to have definitively agreed to anything. That country has been the wild card for the oil industry, since it is bringing crude back to the already oversupplied market now that sanctions against its nuclear program have been lifted.

“This is a selling opportunity … think what the market is rewarding is they had a meeting and it was civil. They all said the right thing. This is a potential first step. If they agree on this, will they agree on a production cut? They need to,” said John Kilduff, partner at Again Capital.

Are we predicting anything here? No. Too many variables are still out there to sort themselves out before oil prices would begin rising enough to put Louisiana back to work and refill the state government’s coffers. But at least this is something to hold on to.