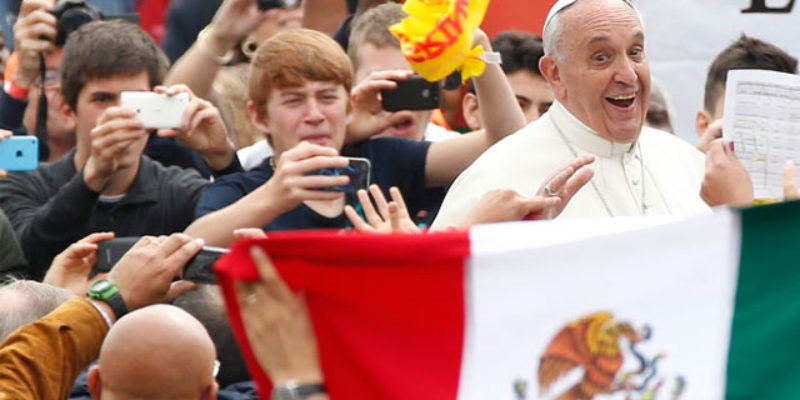 Pope Francis is a man of great compassion and humility. He shows tremendous concern for the young, the elderly and the sick. He advocates for those who have been forgotten, such as the homeless. He has shunned the luxuries and trappings of his position and performs his duties in a significantly more modest style than his predecessors. These are admirable qualities and set a good example for all Catholics.

While there is much to like about Pope Francis, there is also much to be concerned about. When he starts discussing climate change, immigration or economics, his comments seem based more on leftist ideology than reality.

After concluding his latest trip to Mexico, the Pope entertained questions from reporters. Not surprisingly, he was asked about Donald Trump’s plan, if elected President, to build a wall on the Mexican border and deport illegal immigrants. Sadly, the Pope made provocative comments regarding Trump and, instead of refraining from entering the political debate in this country, jumped right in.

He said, “A person who thinks only about building walls, wherever they may be, and not of building bridges, is not Christian. This is not the Gospel. As far as what you said about whether I would advise to vote or not to vote, I am not getting involved in that. I say only this man is not Christian if he has said things like that.”

In true Trump fashion, he responded and called the comments “disgraceful.” He noted that if ISIS attacks the Vatican, “I can promise you that the Pope would have only wished and prayed that Donald Trump would have been President, because this would not have happened.”

It is quite ironic that the Pope, who is protected by massive walls at the Vatican, criticized a presidential candidate who is calling for similar protection in this country. In fact, the Pope’s response reflects mind boggling hypocrisy.

Of course, in his shocking comments, the Pope not only disparaged Trump, but also the millions of Americans who share his views. A growing number of Americans are disgusted with the lack of border enforcement and want action. They are tired of illegal aliens receiving benefits and taking jobs from law abiding Americans.

Hopefully, the Pope is just misinformed about this real crisis impacting America and does not understand the extent of the crime and illegal drugs crossing the border. During his tenure, the Pope has advocated for more illegal immigrants to be accepted in the United States. Yet, as Trump noted, the Pope does not realize that with illegal immigration comes “the crime, the drug trafficking and the negative economic impact” on the United States.

These comments continue a trend of liberal activism that has been apparent during the tenure of Pope Francis. Along with calling for open borders, unchecked illegal immigration and forceful government action on climate change, he has repeatedly criticized capitalism. This simplistic view overlooks the extent of human misery caused by socialism and communism, which is rampant in the Pope’s homeland, Argentina, and many other countries in Latin America.

It would be more appropriate for Pope Francis to direct his barbs at the real tyrants of this region, such as Raul Castro. Yet, the Pope recently visited Cuba and warmly embraced Castro, overlooking his history of political repression and his antagonism against religion. Along with murdering priests, Castro has shuttered religious schools and oppressed believers of all faiths.

Instead of lambasting Castro and the other socialist tyrants of Latin America, Pope Francis focuses his rhetorical fire on advocates of capitalism and politicians such as Donald Trump who want to enhance our national security.

In this case, it was more than just criticism of Trump’s positions on the issues; he also called into question, his Christianity. This attack gave Trump the invitation to respond and defend his faith. He said, “I am proud to be a Christian and as President I will not allow Christianity to be consistently attacked and weakened, unlike what is happening now, with our current President. No leader, especially a religious leader, should have the right to question another man’s religion or faith.”

The Vatican later clarified the Pope’s comments and said it was “not a personal attack.”

In the future, a better approach for the Pope would be to forgo the politics and focus on saving souls and preaching the Gospel. Heaven knows that the world needs that mission fulfilled more than another religious leader playing the role of a liberal politician.