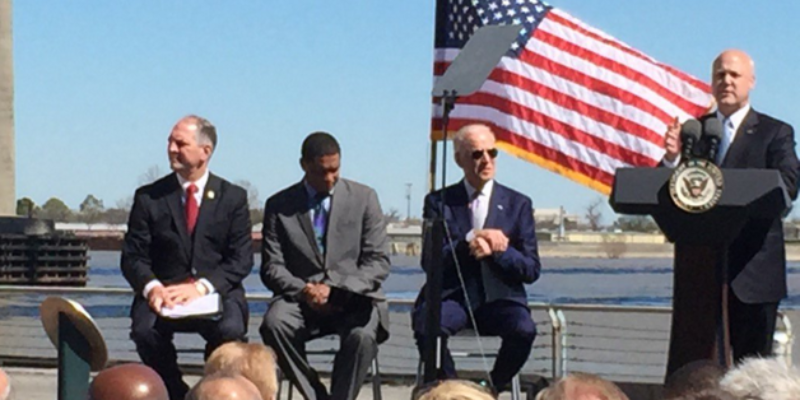 The country is eight years into President Obama’s economy, and yet is still lagging behind as if it just came off of a recession last year.

However, while giving a speech in New Orleans today, Vice President Joe Biden said the country is basically soaring again and things are going splendidly. The Advocate’s Jeff Adelson has the full quote here:

“Great things have been done, but there’s so much more we have to do. We’ve gone from crisis to recovery, we’re now on the verge of resurgence,” Biden said of the recession and stimulus as he called for new infrastructure and transportation funding. “We’re better equipped than any nation in the world to lead the world economically, politically. We just need to get out of our own way.”

Biden  toured the Port of New Orleans and specifically spoke about the recent renovation of the Mississippi River Intermodal Terminal and Yard, a $26 million project funded through the American Recovery and Reinvestment Act.

Edwards even got a shout-out when Biden was criticizing former Gov. Bobby Jindal for not accepting stimulus money back in 2009 to build a high-speed rail system between New Orleans and Baton Rouge.

“It’s great to be with a governor who understands what transportation is,” Biden said, referring to Gov. John Bel Edwards. “I just wish i could bring back the 300 million bucks your other guy turned back.”

Obama’s 2009 $800 billion stimulus package was the largest economic recovery program in history and it was nearly five times more expensive Works Progress Administration and even larger than the Louisiana Purchase, the Manhattan Project, the moon race and the Marshall Plan.

The expensive stimulus package has largely been deemed a failure by the New York Post, Daily Signal and Wall Street Journal, as it cost taxpayers billions yet the economy continued to not grow following the recession of years before.

In the Obama economy, wages have relatively stayed low and flat, partially thanks to an immigration system that allows for illegal immigrants to enter at will, driving working class wages down.

Also, a report released this week found that there are over 45 million Americans on food stamps for the 55th straight month. That data has garnered Obama the nickname the ‘Food Stamp President.’

Additionally, since Obama took office in 2009, income inequality has grown out of control, with the uber rich experiencing massive income growth, while the middle class, working class and poor have experienced almost no income growth.