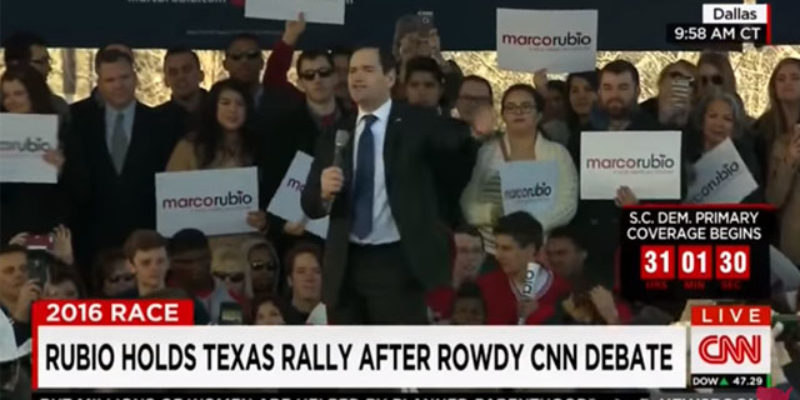 You saw a lot of this last night, but you’re seeing more of it today.

First, Marco Rubio, who is going after Donald Trump more from the standpoint of his personality and persona than anything else. He mocked and ridiculed Trump last night, and this morning in a speech he gave in Dallas he did more of the same. He called Trump a con artist whose whole career has been spent screwing the little guy. He asked “how do you bankrupt a casino?” and ridiculed Trump University as a fake school.

And after that, at about the 5:40 mark, he read mean tweets from Trump after the debate, to hilarious effect. Then told a story about Trump during the breaks in the debate losing his cool. And then suggested Trump has foreigners who can’t speak the language misspelling his tweets.

Meanwhile, there’s Cruz – who isn’t going for the same type of criticism of Trump. Rubio seeks to make him a figure of fun, while Cruz is going after Trump on substance. For example, the Cruz camp put this out…

Cruz was in Nashville this morning doing a town hall and being interviewed by Sean Hannity, a recording of which will air on Fox News tonight. The first part of the interview was all about Trump and it’s an ideological attack on him, with the repeated accusation that Trump is insincere in his commitment to conservative principles and will betray them. He’s not clowning on Trump as Rubio is doing; instead, he’s indicting him in a lawyerly fashion as he did last night.

Whether this is coordinated or not is an interesting question. If it was, there was good strategy behind it. Rubio has the sunnier personality, so having him approach the effort with the light touch and the humor is a good fit while Cruz is better suited to a substantive critique.

It does come off to an extent, though, that this would make Rubio the junior man of the two. Then again, maybe the personality stuff is where America is at present and that’s what will make Rubio the anti-Trump favorite both he and Cruz are competing to be.