Legislation which would create the Louisiana Heritage Protection Commission, designed to protect historical monuments from being removed in the state on the grounds that they are “offensive,” may have been purposefully maneuvered to fail.

Sen. Beth Mizell’s (R-Hammond) SB276 was originally referred by Senate President John Alario (R-Westwego) to its correct committee for a hearing, the State Senate Education Committee, which deals directly with the “Preservation of historic landmarks and objects.”

The bill is designed to protect monuments after an embroiled fight to save four historical monuments in New Orleans ultimately failed and Mayor Mitch Landrieu and the New Orleans City Council signed off on the plan.

That State Senate Education Committee is made up of six Republicans and two Democrats. Republicans are largely on the side of protecting historical monuments, while Democrats (especially those from New Orleans) have railed to take down monuments they deem “offensive” to the public square. 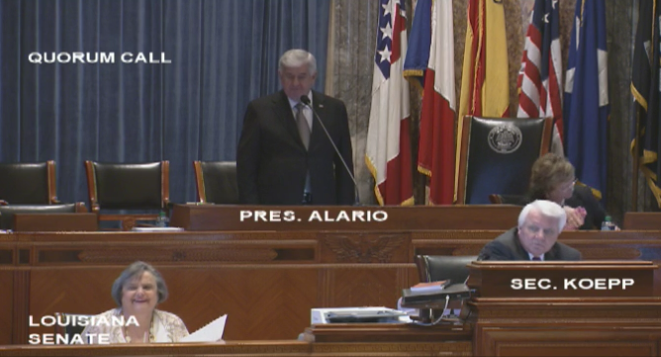 But, for an odd reason, after Alario already referred the Louisiana Heritage Protection Commission legislation to the State Senate Education Committee, where it would have likely flown through and been immediately put up for a vote in the full State Senate, it appears that Alario and State Senate Secretary Glenn Koepp re-referred the bill to the Senate & Government Affairs Committee.

That committee is chaired by none other than State Sen. Karen Carter Peterson (D-New Orleans), one of the most liberal democrats in the State Senate who also heads the Louisiana Democratic Party.

The Senate & Government Affairs Committee is made up of nine members: Five Democrats (four of which are from New Orleans) and four Republicans.

Also, the Senate & Government Affairs does not even deal with the preservation of historical landmarks. This is what the committee deals with:

In this committee, the Louisiana Heritage Protection Commission legislation is considered dead on arrival, as city officials in New Orleans are likely to ask that the five Democrats on the committee kill the bill so that it cannot be heard for a full vote in the State Senate.

The group Save Our Circle, which ferociously fought against Landrieu’s plan to remove four historical monuments in New Orleans, which includes Robert E. Lee Circle, has been pushing for state-wide legislation to protect history all over the state.

However, unless Mizell objects to the re-reference of her legislation to Senate & Government Affairs Committee, the bill is likely to fail.