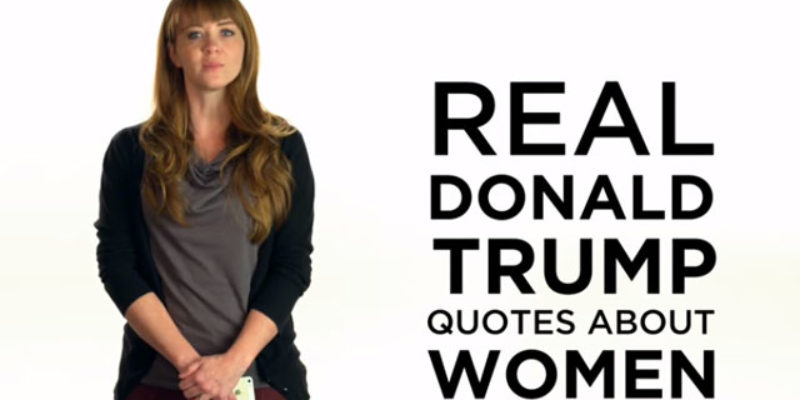 …which is the outfit funded in part by the Ricketts family who own the Chicago Cubs. If you’ll remember, Donald Trump had made threats against them on Twitter to the tune that they had a lot to hide.

The ad is grating and irritating, and probably not completely fair. It’s really scorched-earth, in that if Trump is the nominee it more or less makes him radioactive for the general election. It also attacks Trump from a politically correct perspective, because most of these terrible things he’s said are things normal people have probably said at one time or another and those normal people, while they might agree this litany doesn’t come across as dignified or presidential, might well be loath to disqualify someone for speaking the way they themselves do.

And knowing that this is a big-money GOP Establishment Super PAC ad, it’s going to make the Trumpsters dig in even more, for the same reason they dug in and went ballistic when Ted Cruz and Marco Rubio noted after that riot which cancelled Trump’s Chicago rally on Friday that his combative rhetoric was inviting the Left’s goons to create violence at his events. Cruz and Rubio were correct in noting that, and while there is certainly a concern that if Cruz were to become the nominee the Left is going to start sending goons into his rallies just like they do to Trump, so far none of the other GOP candidates have had a problem with violence at their events. But even though both took pains to castigate the Left for sending those goons, the fact they noted it wasn’t smart for Trump to embrace the rough-and-tumble was enough to send Trump fans into orbit. This is going to be exactly the same thing – they’ll be furious, and they’ll focus on the messenger. The messenger is rich Establishment PAC people, and those are bad. Period.

But everything said in the ad is true, and documented. And if this is what he’s getting in the GOP primary, don’t think for one second that Trump won’t get twice as much in the general.

Those are all things Trump has either said on camera or even written in one of his books. When we get into the general election you’re going to hear and see things he reportedly said in private and were heard by people who’d rather see Hillary Clinton be president – or worse, things he’s done. And you’d better believe those things are a lot more salacious than what’s in this ad.

Which is not to say we’re glad to see this ad, or even that we think it’s all that effective. The Trump calculus really isn’t complicated. There is anywhere from a quarter to two-fifths of the GOP electorate (depending on whether that electorate includes Democrats and independents in a given state per its primary rules) which is going to support Trump as a protest vote, and it does zero good to point out to those people what his failings might be. They’re not listening, and Trump isn’t particularly wrong when he says he could shoot somebody on Fifth Avenue and not lose their votes.

The rest of the GOP electorate registers something along the spectrum between disapproval and horror at Trump and will happily vote against him in a primary contest even if they might believe he’ll be the nominee. This ad won’t win their vote, but it will depress them. Perhaps enough to get them to disengage from politics in the idea that Trump will be the nominee, he’ll get killed in the general election and there’s nothing anybody can do about it.

Our Principles PAC, which is running this ad in Florida, probably would have done better to run an ad explaining that the best chance of beating Trump down there would be to vote Marco Rubio even if you’re really for Ted Cruz or John Kasich. Most of the voters, particularly in a closed primary, get it. But as long as that majority is split three ways, even if Rubio (outside of Florida) and Kasich (outside of Ohio) combine for a small number of votes, Trump is going to get a plurality in most places. Tonight we might see that plurality busted – perhaps by Cruz in Missouri, North Carolina or Illinois (or a multiplicity of those three states), Kasich in Ohio or Rubio in Florida. If we do, it will only cement a simple fact.

Namely, until there is one anti-Trump candidate against Trump, he’s going to stay as the frontrunner and ads like this will remind everybody that the general election will not go well.