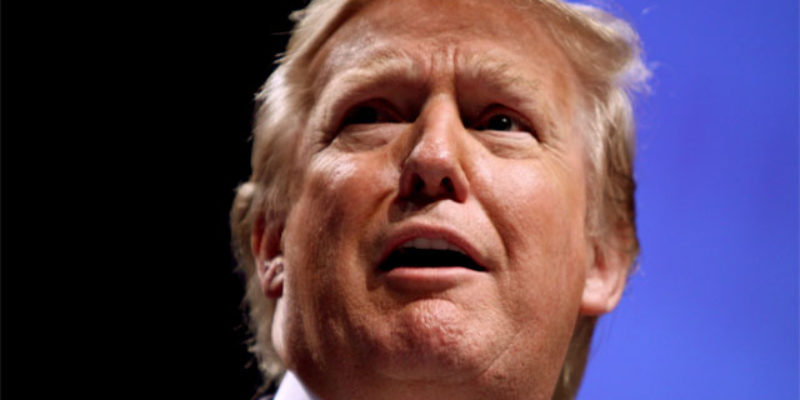 Donald Trump is a vulgar man. His whole schtick is insulting people and even entire groups in the guise of “telling it like it is.” Trump is also a con artist who has made his forture scamming the average person. But he continues to lead the Republican nomination for president.

He won’t renounce white supremacists who support him, he won’t acknowledge that the Ku Klux Klan is a hate group and, in an eerie display of flashback scenes, he recently asked his followers at a rally to raise their right hands, Nuremberg-style, and pledge their loyalty and votes to him.

In New Orleans last week, Trump was frustrated that guards didn’t remove the black protesters who were peacefully standing among the crowd at his rally quickly enough.

“It’s taking a long time, I can’t believe it,” he said. “See, in the old days, it wouldn’t take so long. We’re living in a different world.”

We were living in a different world.

We were in a world where it was moral, not political, to be inclusive.

We were in a world where genitalia were not discussed during presidential debates.

We were in a world where children could look up to their leaders and emulate them, and it would make others proud.

We were in a world where everyone agreed to “never forget.”

And somehow, we forgot. And this new world we’re in seems frighteningly and dangerously like the old one we were finally making progress leaving behind.

The column also describes actual incidents of racism that have been inspired by Trump and his rhetoric. This isn’t what is all too often described as “racism” on Tumblr or “microaggressions” on college campuses, this is the actual stuff. Muslims, Hispanics, and those who came here legally are Americans too, even if they don’t have white skin.

Is Trump making the culture more sick or is he the byproduct of cultural rot? I argue that it’s the latter. John D. Wilsey writes in The American Conservative that the reason why Trump has staying power is because that as a society, we have forgotten our manners.

Trump’s statements shock many. I hear a lot of my evangelical Christian friends express their befuddlement, asking things like “Who is supporting him?” and “I don’t know anyone who backs him.” Clearly, a lot of people are. And instead of being shocked by Trump and his buffoonery, we should be shocked at ourselves.

After all, Trump is not an anomaly. He is a reflection of American culture. He is the image of the coarseness and incivility in American culture that has grown more and more pronounced until today, when it is acceptable for a major presidential candidate to refer to one of his opponents as a p***y. He ought to have his mouth washed out with soap. (That was my grandmother’s form of waterboarding.)

When we see Trump, we see ourselves. Trump is a credible candidate today, and he would not have been credible in the past. Trump has always been a boor, but American manners have not always been boorish enough for Trump to find a place in public discourse. Now they are. We have no one to blame but ourselves, we who have become narcissistic, uncivil, civically lazy, obdurate, gullible, uncouth, easily offended, and in the prophet Jeremiah’s words, we are so implacable, we do “not know how to blush.”

Trump’s vulgarity and the cultural rot that it represents is a threat to a free society. John Adams said in his famous quote that ” Our Constitution was made only for a moral and religious people. It is wholly inadequate to the government of any other.” A more coarse and degenerate culture lays the foundation for tyranny.

How do we restore our culture? I’ll let Wilsey explain:

First, Tocqueville noted that Americans were not especially virtuous, but they did have an abiding self-interest, and they recognized that their interests were promoted by the public interest. In other words, the best way to achieve private goods was to guard the interests of the whole. Tocqueville famously called this reality “interest rightly understood,” and posited that it prevents society from descending into moral chaos. It may not make all people in society virtuous, but it does raise those up who are particularly lacking in virtue: “I regard it as their chief remaining security against themselves.” Yet the principle of interest rightly understood does not come naturally to people. It must be taught, and again, religion has a role to play in the instilling of this principle.

Second, and most importantly, if society is to preserve liberty, it must be vigilant and determined to be proactive in doing so. For example, to exercise the principle of interest rightly understood, “daily small acts of self denial” are required. Because egotism is the basic vice of the human heart, the selfie culture is the natural tendency in an equal society. And despots encourage egotism. Tocqueville said of the despot, that he “easily forgives his subjects for not loving him, provided they do not love each other.” And when they do not love each other, they will not seek to govern themselves but they will be satisfied to leave the responsibilities of government with the despot. This statement fits Trump, perhaps like no other statement from Tocqueville does.

Supporters of Trump are looking for the easy way out of what ails the country—an ailing military and economy, the failure of U.S. leadership in the world, illegal immigration, and the rising tide of secularism and the growth of the influence of those who profess no religious faith. They are looking for someone who can “make America great again” by “bombing the s*** out of” ISIS, by getting rid of all illegal immigrants, by making sure that everybody says “Merry Christmas” around December-time. And of course, Trump assures us that if he is elected president, “we’ll win so much, you’ll get bored of winning.” If we are to believe Trump, all we have to do is elect him, and all our problems will go away.

Tocqueville wrote that despotism promises all the answers, but it can only deliver despotism: “despotism often promises to make amends for a thousand previous ills.” Under a despot, the “nation is lulled by the temporary prosperity which it produces, until it is roused to a sense of its misery.” But liberty, Tocqueville stressed, is the fruit of long-term commitment, determination, and labor. And contrary to despotism, of which fruits can be measured in the short term (i.e. “he keeps the trains running on time”), liberty can only be appreciated once its effects have taken time to develop. “Liberty … is generally established with difficulty in the midst of storms; it is perfected by civil discord; and its benefits cannot be appreciated until it is already old.”

We need to learn to govern ourselves as a people. We need to pass down time-honored values to our children and in communities. As a people we must learn to be a moral and righteous people again. Finally, we must resist and combat this cultural rot that all of us have partaken in. This cannot be done by legislation, this can only be done by changing our hearts and minds.

Liberty is only sustained by a moral people and nurtured in a healthy culture. Our culture is rotten and out of it has risen Donald Trump.

Interested in more national news? We've got you covered! See More National News
Previous Article VIDEO: Have You Seen The Trailer For Dinesh D’Souza’s Movie About Hillary And The Democrats?
Next Article The Legislative Session Is Over, And John Bel Edwards Is Complaining…