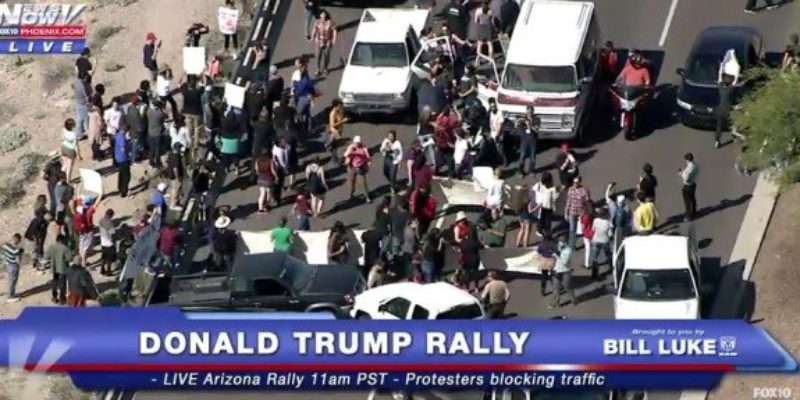 Via Gateway Pundit, she’s not really from New Orleans. She just hangs her hat here.

Did you see this over the weekend?

That’s a bicycle chain she’s got around her neck, connecting her with the door of that van. Looks pretty uncomfortable, right?

The goal of that, other than to achieve really, really outstanding posture, is to make herself impossible to remove. Unless the police or whomever else was willing to unblock the roadway decided not to care about killing her while getting the van off the street. And she didn’t lock herself to the door of the van until the cops came and ordered her and her fellow protestors to get off the road.

Turns out her name is Jacinta Gonzalez Goodman, and she’s from “central Mexico” but claims New Orleans as a residence. And she is a Soros Justice Fellow with the Congress of Day Laborers. That’s a group which is part of the New Orleans Workers’ Center For Racial Justice, which is the organization that also brands itself Stand With Dignity; our readers might remember those clowns from previous reports.

When you get a Soros Justice Fellowship, somewhere between $58,000 and $110,000 comes with it. It’s a grant to fund doing things like chaining yourself to a van to stop traffic going to a Trump rally.

The New Orleans Workers’ Center For Racial Justice is the gang taking credit for making New Orleans a full-on sanctuary city a couple of weeks ago.

What’s most entertaining about this is when the local sheriff came – and since this happened in Maricopa County the local sheriff is Joe Arpaio – his deputies arrested the three commies who had blocked the road. Two of them were quickly let out, but Miz Jacinta was turned over to ICE.

Which she promptly made a video howling about. Because racism. (As an aside, in case you don’t know what that word on her t-shirt is, it’s “mijente,” which means “my people” – it’s a leftist/social justice/Hispanic supremacist thing.)

ICE has a little different take on why they decided to hold her.

“Ms. Gonzalez-Goodman was recently released from U.S. Immigration and Customs Enforcement (ICE) custody after database checks determined she currently holds a valid United States passport. Under current ICE procedures, all foreign-born individuals who are booked into the Maricopa County Jail are interviewed by ICE personnel to determine alienage and removability and whether they would be an enforcement priority for the agency.”

So that’s who blocked traffic for two hours over the weekend attempting to interfere with the peaceful assembly of people she disagrees with. New Orleans ought to be proud to have attracted such energetic young people.