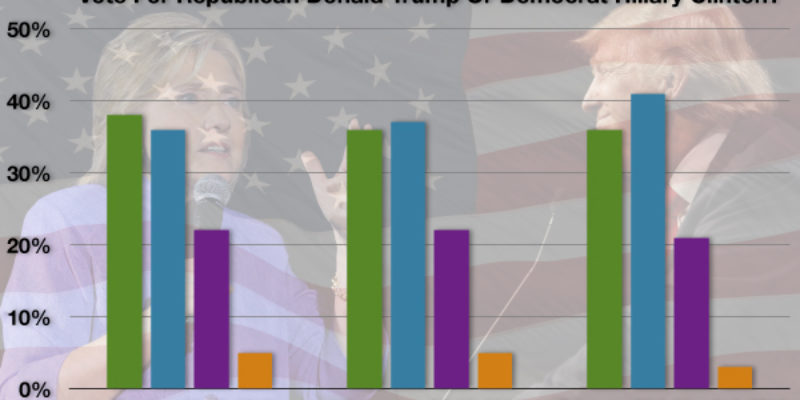 There’s an interesting Rasmussen poll out today on a prospective race between Donald Trump and Hillary Clinton. Clinton is up on Trump 41-36, which is an increase from the poll Rasmussen did in December which had her statistically tied with him, 37-36.

And this, despite the fact that Trump beats Clinton 34-32 with independents.

The good news for Trump is that one-in-four voters are still up for grabs if the presidential contest comes down to these two, with a sizable 21% who prefer some other candidate at this point and three percent (3%) who are undecided. (To see survey question wording, click here.)

Trump has the support of 65% of GOP voters, while Clinton picks up 76% of the vote among Democrats. Twenty-two percent (22%) of Republicans and 13% of Democrats like some other candidate right now. Among voters not affiliated with either major party, it’s Trump 34%, Clinton 32%, with nearly as many (28%) who prefer someone else.

This survey was taken the night before and the night of yesterday’s Super Tuesday primaries. Clinton and Trump were the big winners yesterday, but while the Democratic race is all but over, the GOP hopefuls are likely to fight it out a while longer.

The fact that Trump’s numbers nationally haven’t moved in nearly five months mirrors the concern GOP party leaders have that the billionaire businessman’s outsider campaign may have reached its ceiling of support.

She can command significantly more loyalty from Democrats than Trump can from Republicans, plain and simple. Trump bleeds 35 percent of the Republican vote, and 22 percent of that goes to a third party.

When it comes to which candidate voters trust more on key issues, Trump leads when it comes to the economy, job creation and immigration.  Clinton has held her lead on social issues but has widened her advantage on the environment. The two are virtually tied now when voters are asked whom they trust more to handle national security.

Trump has a slight edge among male voters, but Clinton posts a double-digit lead among women.

Voters 65 and older are the only age group in which the Republican has the advantage. However, Clinton has struggled in the primaries to capture the youth vote, and while she has a 16-point lead over Trump among those under 40, 30% of these voters either like another candidate or are undecided at this time.

Both Trump and Hillary are seen by 81 percent of the voters in their parties as the likely nominees. The country thinks this is the matchup at present.

And both candidates are considered as political moderates. Which isn’t great for Trump…

Most conservatives favor Trump, while even more liberals like Clinton.  The Democrat leads by nine among self-described political moderates.

The #NeverTrump thing is being cast as a GOP establishment project. It’s not. It’s a conservative project, some of which includes people within the establishment. Trump’s challenge, and that of his supporters, if in fact he expects to win the presidency (or even the GOP nomination), is to convince ideological conservatives that he can and will govern as one.

He made an effort last night to do some of that. He’ll need to do a whole lot more.

Months ago I explained how. Not that I would expect anyone to listen. I’m convinced this whole thing is a snow job, and the GOP is split three ways among those who have bought it hook, like and sinker, those who are resigned to accept it if it is to be but don’t prefer it and those who are willing to walk if Trump as the nominee is the result. So far he’s gotten all of 34 percent of the vote in the 15 primaries we’ve had and this poll shows him with 65 percent of the GOP vote against Hillary.

But in two weeks we’ll have had the Ohio and Florida primaries, and if Trump wins both the race is likely going to be fairly near to its end. Public polls show Trump 16 points ahead of Marco Rubio in his own state, though the state chamber of commerce apparently has poll data showing Rubio within six and is planning a $25 million bombardment of Trump with negative ads in hopes of derailing the frontrunner there.

If that doesn’t work, the question in the race is whether Trump can make the peace with the #NeverTrump crowd. It isn’t hard to beat Hillary; her own people aren’t even enthused about her. Trump might be the only GOP candidate who can’t do it, because for all the people he supposedly is bringing into the GOP he looks like he’s driving even more out. Surprising how he’s the one getting all the media attention, isn’t it?