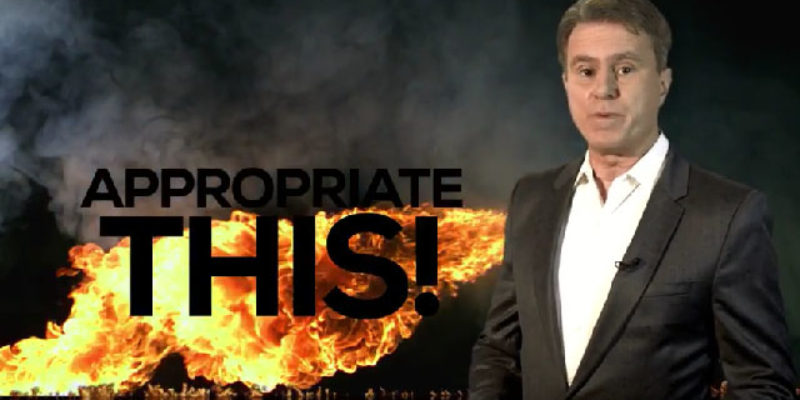 Bill Whittle has had his fill of “cultural appropriation,” the latest wave of moronic leftist cultural aggressions which hold that, essentially, if you’re a straight white male you’re not allowed to engage in much of anything of our shared culture. That means no eating Mexican food, wearing of dreadlocks, singing along to Smokey Robinson songs or watching kung fu movies.

It’s quite possibly the most obnoxious of the Thought Police activities on college campuses, in that it purports to make straight white males, and people of European descent generally, not even second-class citizens. Even during the Jim Crow days there were no restrictions on black people having “white” hairstyles or wearing “white” clothing or eating “white” food, which is how far this purported prohibition on “cultural appropriations” has gone.

The people pushing this nonsense know that it’s nonsense, which is why so far they’re treading relatively lightly with it. You’ll see the odd attempt to ban Cinco de Mayo celebrations, for example, but so far there isn’t a lot in the way of institutionalized persecution along these lines. As we’ve seen, though, once these cultural aggressions get a little bit of traction their perpetrators go absolutely bananas with them.

So until and unless the responsible adults start punishing the entitled morons on college campuses and elsewhere who try to push this garbage by draining their funding and filing lawsuits – and, in the case of the social-justice warrior in the video below who accosts a white kid for having dreadlocks and threatens to forcibly cut his hair, filing criminal assault charges, it’s going to get worse.

Whittle doesn’t quite go that far, but he does offer something else – namely, that if the feminists or the #BlackLivesMatter losers or any of the other non-white, non-male wannabe tyrants want to stop “cultural appropriation” from happening, there’s a whole lot of the contributions from white guys to modern society that they can’t in good conscience avail themselves of. And they won’t like going without them one bit.