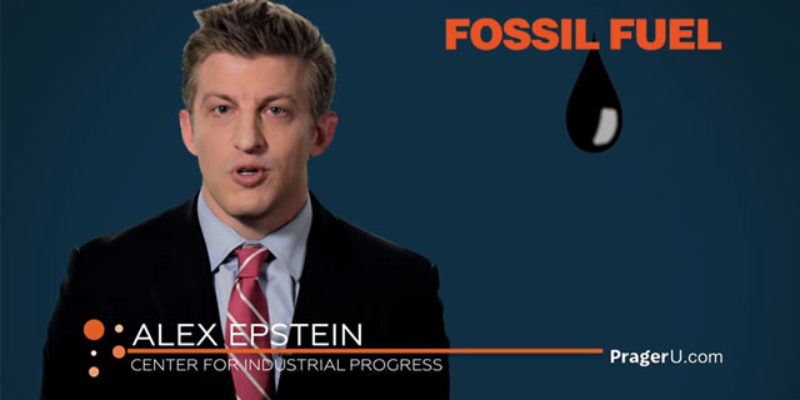 To make earth cleaner, greener and safer, which energy sources should humanity rely on? Alex Epstein of the Center for Industrial Progress explains how modern societies have cleaned up our water, air and streets using the very energy sources you may not have expected–oil, coal and natural gas.

Before you write this off as propaganda from the oil industry and turn Epstein and Dennis Prager over to Al Gore and his merry band of climate-fascist state attorneys general who are threatening to prosecute global warming skeptics, you might think about what Epstein said. Which is that by using oil, gas and coal the Third World will get away from burning the dung of domesticated animals as cooking fuel inside their homes, which is common, or using untreated water for drinking – and in so doing contribute to massive death rates from preventable causes while having filthy environments to live in.

London is a good example. The London of 150 years ago was a catastrophically polluted place, with buildings black with soot and the air nearly impossible to breathe, and cholera epidemics breaking out frequently thanks to a poisonous water supply. Today, by comparison, it is amazingly clean. Why? Because our modern economy, driven by fossil fuels, has the power to dispose of waste cheaply and efficiently that an economy not driven by fossil fuels can’t.

That’s the difference between a clean London and a dirty Peshawar, for example, with the polluted semi-industrialized Beijing in the middle.

Of course, the environmental Left doesn’t care about cholera and they don’t care about African villagers cooking with cow dung as a fuel. If death rates from preventable causes in the Third World happen, that’s OK by them – they believe the Third World has too many people in it to begin with. They want the planet to look as it did before the industrial revolution, and they’re largely unaware that it was in large part dirtier then, at least where people lived.

They’re environmentalists, after all. Not humanitarians.