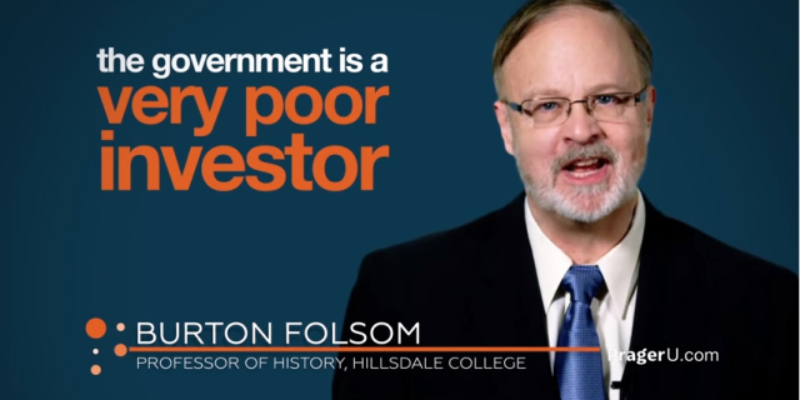 Of all the Prager University videos, we might like this one best – for a number of reasons.

First, it features Burton Folsom, the great historian from Hillsdale College, who simply doesn’t get enough air time. Folsom is one of the dying breed of historians who actually teach history – not some dressed-up, bastardized revisionism to please the politically correct crowd, and you get a taste of that in this video.

Second, it uses two absolutely classic cases from history – the Great Northern Railway and the Wright Brothers – to demonstrate the difference in performance between the private sector and the risk-taking entrepreneur and the rent-seeking government contractor in terms of getting things done.

If you’re a fan of the AMC series Hell On Wheels, you know all about the Union Pacific Railroad and what a disaster it was. The show sensationalizes a good deal of the corruption and incompetence surrounding the Union Pacific, with Colm Meaney’s brilliant performance as “Doc” Durant, the fraudster and thug who ran the railroad into repeated bankruptcies, being substantially accurate in the character of the man. Private companies can’t long abide the Doc Durants of the world and tend to pack them off quickly; government-subsidized and sponsored enterprises seem to be exclusively run by them because to secure government financing requires not results but politics.

And the Wright Brothers case is a perfect one. The Samuel Langley government airplane disaster was an embarrassment to end all embarrassments when that pair of bicycle mechanics built a working plane with $2,000 of their own money. We’re seeing this begin to take hold as Blue Origin and SpaceX compete to build inexpensive space rockets that can land and be reused after decades of waste by NASA.

At one time there was a consensus to leave government out of things which could be most easily defined as “private goods” – namely, those things which are excludable and rivalrous (excludable, meaning that it’s possible to prevent someone from accessing the good without permission, and rivalrous, meaning the same good can’t be exchanged more than once at the same time). Whenever government intrudes upon the provision of private goods to assume that role for itself, inevitably the result is waste, corruption, inefficiency and incompetence.

Which American history shows us. Thanks to Prager University and Prof. Folsom for providing the reminder.

Interested in more national news? We've got you covered! See More National News
Previous Article CROUERE: Jackson Won The Battle Of New Orleans, But Not The Battle Of Political Correctness
Next Article Now, The Edwards Administration Says The State’s Budget Deficit Is Only $600 Million