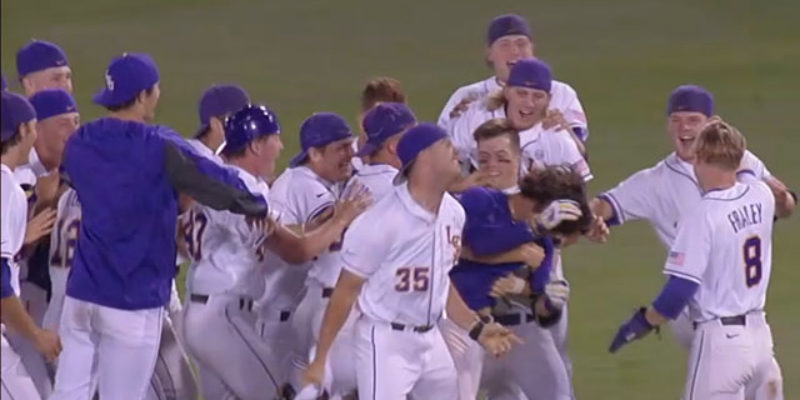 As you can tell, I’m all about the SEC Tournament this week. The other subjects I usually blog about here currently depress and disgust me, and since there’s something fun going on in Hoover that I can get distracted with, I’m happily distracted – as I suspect some of you probably are as well.

So hey – how about that crazy LSU win last night?

Save for Jake Latz’ terrific two innings – and not long after Paul Mainieri took him out of the game a number of us were whining that he needed to be pitching for three innings, or four, or seven – the first six innings of that game might have been the worst LSU has played this year. Errors, atrocious defense behind home plate, bad hitting and an amazing THREE runners getting thrown out at home plate put the Tigers down 4-0 in the seventh inning.

As an aside, we’re told that the LSU season total of 28 runners thrown out at the plate after base hits so far this year has broken a 53-year old NCAA record, which ain’t good. In fact, for a team with LSU’s speed – they tied for second in the SEC in stolen bases this year – to set a record like that is something like objective evidence that the third base coach isn’t just bad, he’s the worst ever. That might be a harsh judgement of Nolan Cain, who by all accounts is a great guy and a former LSU player, but it’s fair to say he’s struggled in his first year coaching third.

And last night was no exception. How about some video of the game?

The comeback was really pretty epic, in that even as LSU was clawing their way back into the game the mistakes were piling up. Example: Score three runs in the seventh, then get a guy thrown out at the plate on a base hit with the bases loaded.

And then Greg Deichmann, who’s been in a fairly terrible slump that ended about a week ago and is now crushing the ball, hits a rainmaker over the center-field fence to tie the game. And Kramer Robertson comes through – again – with a huge hit after the bases were loaded.

The SEC Network’s interview of Robertson after the game was one of the more entertaining things you’ll see.

Not to mention Hunter Newman, who is one of the hottest relief pitchers in the country, firing away for two dominant innings in the eighth and ninth and ultimately getting his first win of the season. But for the runners getting thrown out at home Newman would have earned his seventh save – and we wouldn’t have gotten to see Deichmann’s blast or K-Rob’s game-winning hit and subsequent de-shirting.

The other thing was the coaching mistakes – not just the LSU baserunners turning home plate into Custer at Little Big Horn, but the errors by Tennessee head coach Dave Serrano – who has had very meager success there but is widely regarded as a terrific coach who took both Cal-Irvine and Cal State-Fullerton to the College World Series before landing in Knoxville.

Serrano went to his atrocious bullpen far too early, as his starter Will Neely was tying LSU’s hitters in knots – he should have left Neely in the game until his arm fell off so long as LSU wasn’t hitting him, especially considering that two weeks ago Neely also had LSU’s number and the Tigers didn’t beat up Tennessee’s pitching until he’d left the game.

But in the ninth inning he really did a poor job of managing the game. After Deichmann’s home run, Beau Jordan walked and then advanced to second on a Cole Freeman bunt. So the winning run was at second with one out. He did what you’d expect the coach to do, which was intentionally walk Antoine Duplantis to set up a double play. But he had a right-handed pitcher up and Jake Fraley, who was next, is a left-handed batter. So after a couple of pitches that missed the strike zone and Brennan Breaux, who had come in to run for Jordan, advancing to third on a wild pitch, Serrano opted to intentionally walk Fraley to get to Kramer Robertson.

Yes, yes – you have a base open and the only run that counts is the one on third, and you need a double play. We get that.

Except number one, Kramer Robertson has proven again and again that he is the absolute last guy you want to pitch to with the game on the line. The kid is so clutch in the ninth inning this year he’s gotten national publicity about it. Number two, you had the double play in force when Fraley was up, because Duplantis failed to advance on the wild pitch. And while Fraley is a hard guy to get a double play on due to his speed, so is Robertson.

It just seemed at the time like Serrano didn’t recognize who he was dealing with, and he needed to pitch to Fraley and try to either strike him out or coax a popup out of him, or maybe get a grounder hot enough that a double play was doable. Instead he gave in, and he pretty much served the game up to Robertson.

Good enough. We’ll take it and move on. LSU is now 40-17, and tonight is the pitching matchup for the ages – Alex Lange for LSU and A.J. Puk, the projected top pick in the major league draft, on the mound for Florida. If LSU wins tonight, it starts to become realistic to open discussions on getting a national seed.