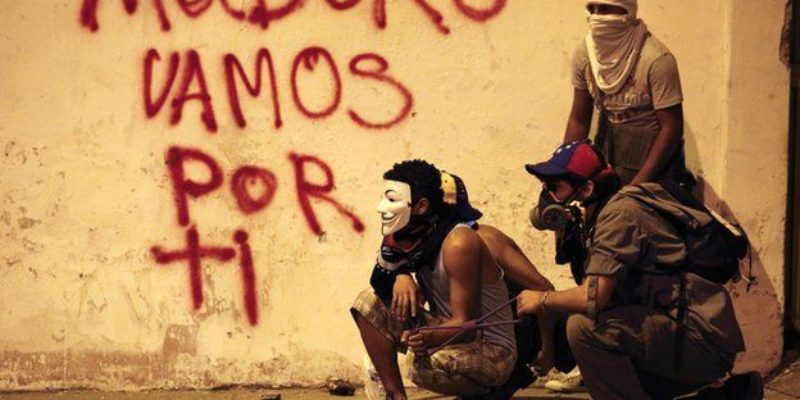 I did a column for the American Spectator which is up today, throwing out five examples of the glistening incompetence of the Left to actually govern. Among them – Bernie Sanders’ wife having bankrupted the college she ran, the TSA’s having destroyed American air travel, the corruption surrounding the Flint water crisis and Barack Obama’s tranny-in-the-bathroom decree last week.

Just travel south to Venezuela, and you can see socialism’s denouement in real time. You already know about the explosion in crime, the violent repression and the food riots, but we have a cherry to place on top of the dung-heap that country has become; namely, that its caudillo in charge Nicolas Maduro said over the weekend that any factories idled by that country’s economic collapse would now be nationalized.

Here’s a truly intellectual quote from a world leader: “Comrades, I am ready to hand over to communal power the factories that some conservative big wigs in this country stopped. An idled factory is a factory handed over to the people. But we’re going to do it, f*ck it! The time has come to do it and radicalize the revolution. The time has come without vacillation. To vacillate is to lose ourselves. We have no choice but to do it.”

One could make the case that Maduro, and the execrable Hugo Chavez who preceded him before dying with a fortune larger than Mitt Romney’s, has already f*cked it.

Maduro is a dunce, and a dangerous one at that, and a decent American president who was worthy of the conspiracy theories and blame the dictator has heaped on Obama would be actively working to bring his government down for humanitarian reasons.

A tyrant becomes most dangerous when he reaches the end of his rope. This is where Venezuelan President Nicolas Maduro now finds himself. On Monday, he placed Venezuela under a “State of Exception and Economic Emergency” due to “international and national threats against our fatherland.” Specifically, he warned of a coup against himself orchestrated by the United States government.

On Tuesday, a state-funded news service reported his threat to dissolve the national legislature, which the opposition party won in a landslide election last December. “The National Assembly has lost political validity,” Maduro told reporters. “It’s a matter of time before it disappears.”

But Maduro is probably beyond saving. At this point, only 15 percent of his fellow citizens approve of his government. Political protests roil the streets, and normally law-abiding citizens have resorted to looting to get their hands on basic necessities. The government has responded with force.

Venezuela’s hospitals lack not only medicine but even soap, and cannot keep patients — especially at-risk infants — alive amid constant blackouts. Infant mortality rose by a hundredfold in 2015 from its 2012 levels, and five times as many women now die in childbirth. When his political opponents passed a law allowing foreign aid to prop up Venezuela’s hospital system, Maduro blocked it, calling Venezuela’s healthcare system the envy of the world.

Government agencies are now open only two days a week, as a cost-saving measure. The economy is in collapse, in the midst of its second straight year of double-digit contraction. Everyday items, including food, have long been difficult to buy in Venezuela, but they are now becoming impossible to find. Government-imposed price controls, combined with an astounding 700 percent inflation rate, have made toilet paper so scarce that it’s more valuable by the square inch than the Venezuelan currency one must use to buy it. (To be sure, it still flushes better).

Venezuela always relied heavily on oil exports, and lower oil prices since 2014 have made the current crisis more acute. But the shortages, the street violence and the political discontent had already begun back when oil prices were still high.

And of course there are lots of people to blame. When lefties fail, there always are. Maduro blames America, of course. He blames his opposition, which he has treated in a fashion that almost, but not quite, looks like an old-fashioned communist liquidation (most of them seem to be in and out of jail, though not too many of them have been killed…yet). He even blames illegal immigrants from Colombia, which is hilarious – are there any illegal Colombians in Venezuela, and if so why on earth don’t they go home? Don’t they know how much it sucks in Venezuela?

The level of violence in Venezuela is extreme. The New York Times editorial board yesterday actually blamed socialism for that country’s devolution, and offered up some staggering numbers…

Violence has soared as armed gangs loyal to the government roam the streets. During the first three months of this year, 4,696 people were murdered in Venezuela, according to the government, and in 2015 more than 17,700 were killed. The three-month death toll is higher than the 3,545 civilians killed last year in Afghanistan, a record number.

What’s ultimately going to happen, after a few coming attempts at a democratic solution there, is either a military coup which deposes Maduro and a reunification government of sorts is cobbled together, or there will be a full-on violent revolution. The guess is it’s going to be the latter, although the regime disarmed the public and that’s likely going to make for a longer and bloodier ordeal once the fighting starts. There is surely a black market in Venezuela where for the right price guns can be had, but when the currency has become worthless and doctors are accepting cooking oil as payment for medical treatment it’s likely going to be difficult to arm up a revolution – and angry citizens with pitchforks and pool cues will take severe losses in attempting to take down a government armed with guns.

Which means Venezuela offers yet another lesson – don’t give an activist government the power to take your guns away.

We’d love it if American colleges were to start up a whole series of programs giving credit hours to students willing to go to Venezuela to provide humanitarian aid. Let’s let all those kids who “Feel the Bern” run down there and see what socialism really looks like in action. Maybe, for the first time in their lives, they might actually learn something.

It’s a lack of knowledge, after all, which enables leftist idiots to gain political power in the first place. Nobody who understands what comes of socialism would volunteer to live under it.