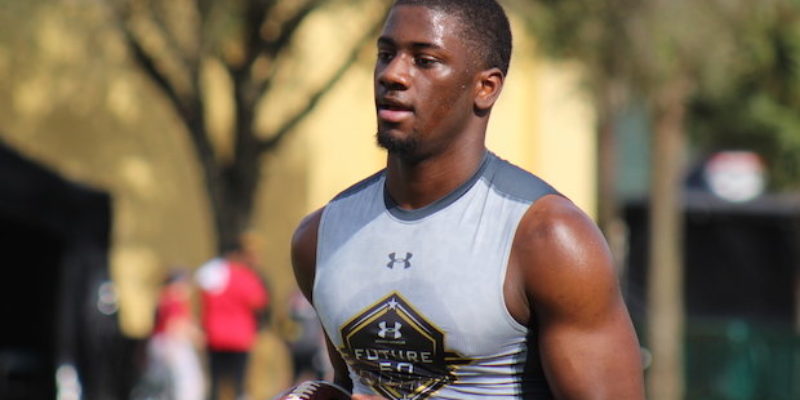 If that headline doesn’t give our readers who are LSU football fans a double-take, nothing will.

If you’re in Louisiana, think about it. National politics is beyond horrible, we have a lying incompetent in the governor’s mansion bent on stealing our money and paying off campaign promises with it, crappy roads, crappy schools, crappy weather – it’s not even hurricane season yet and half the state has already been under water this year, the Jazz Fest got partly rained out, criminals are causing havoc everywhere, the Saints suck, the Pelicans suck, even Ben Simmons couldn’t get LSU’s basketball team to the tournament and Hokie Gajan and John Mahaffey died.

We need some good stuff to happen, and fast.

All of a sudden, Les Miles – who has spent more than a decade as LSU’s football coach driving the fans bonkers by subjecting us to terrible quarterback play from the Jarrett Lees, Jordan Jeffersons, Anthony Jenningses, Brandon Harrises and Andrew Hatches of the world, with an occasional respite (as in, one year of Zack Mettenberger) – does something nobody would have expected.

LSU has never, ever recruited a quarterback with numbers like that, and Brennan isn’t even finished yet. Supposedly the team around him is going to be better this fall than either of the last two he’s had, though we can’t confirm that knowing little about the Rock-A-Chaw program.

What you notice about Brennan is that he has a pretty quick release, though there’s a little bit of a windup to his motion on the deep balls, and there’s a good deal of zip on his passes. And he’s a lot more mobile than you’d expect from a gangly kid like he is. It’s almost a good thing on his film that his right tackle is more or less a matador, because constantly having to dodge the resulting pass rush shows off his presence and his escapability. He also does a really good job of picking up receivers while scrambling out of the pocket.

He needs 30 pounds of added muscle before it would be anything other than abuse to put him into a college game, but that’s a given. Brennan is going to get some time to develop – at best he’d be the third-string quarterback as a freshman in 2017, behind Brandon Harris and Danny Etling who’ll both be seniors (and that’s assuming he would leap past Justin McMillan, who’ll be a third-year sophomore, and Lindsay Scott, who’ll be a redshirt freshman). Realistically he’ll have three years to get into the 210-2015 pound range you’d want a 6-3 quarterback to be in.

And the word on Brennan is he’s one of the most intelligent, coachable quarterbacks around.

Brennan is ranked as the #171 player on ESPN’s Top 300 list of recruits for 2017, and most of the other services rate him as a three-star player. He’s not as highly thought of as you might expect given his numbers, and his offer list doesn’t have a bunch of Alabamas, Floridas and Ohio States on it. But what it does have is a bunch of teams coached by legitimate offensive gurus. Cal, where Jared Goff just made himself the top pick in the NFL Draft, offered. So did West Virginia. So did Wisconsin, whose head coach Paul Chryst is known as a wizard. So did Cincinnati, Memphis and Southern Miss – go look at the offensive numbers those teams have put up. In other words, people who know quarterbacks know Myles Brennan.

Then on the heels of nabbing Brennan, earlier this week LSU locked up a commitment from Louisiana’s top quarterback and, potentially, top overall player, when Lowell Narcisse, Jr. of St. James High committed to Miles and the Tigers.

Narcisse’s junior year was partially wiped out by a blown-out knee he suffered in the spring, but he came back at the end of the season and played on it for a three-game run in the playoffs (like Brennan, Narcisse found himself with a loss in the state title game). Here’s film from that stretch – you can tell he probably came back a little early on that knee, but you can definitely see the athleticism…

What you notice about Narcisse is that he gets really good zip on the ball with a fairly effortless and smooth throwing motion. Like Brennan, he throws well on the run, though when Narcisse gets out of the pocket you might prefer that he just take off and run because he’s pretty dangerous in doing so.

Narcisse is rated more highly than Brennan. For example, on the ESPN Top 300 list where Brennan ranks #171 Narcisse checks in at #38, which would be the top player in Louisiana but for Notre Dame High School defensive tackle Tyler Shelvin, who is also committed to LSU, checking in at #17. But that’s partially due to Narcisse missing that big chunk of his junior year with the injury; had he played the whole season who knows where he’d be rated. As a sophomore he threw for 3,100 yards and ran for another 1,400, accounting for 49 touchdowns along the way. But he’s not the high-profile passer Brennan is from an accuracy standpoint.

Overall, though, the coupling of the two makes it about as sure a thing as you’ll ever see that LSU has a good future at quarterback. If that sounds weird to read, believe us – it sounds weird to write it as well. But don’t take our word for it. Here’s 24/7 Sports’ Barton Simmons…

With both Brennan and Narcisse on board, LSU has the kind of competitive atmosphere at quarterback that most college staffs covet. I think LSU would prefer for Narcisse to emerge out of this class as the future at quarterback in Baton Rouge because of his dynamic ability with his legs but LSU is going to have options at quarterback with these two players on board – good options.

It seems a little like a throwback to 2003, when LSU signed Jamarcus Russell and Matt Flynn in the same class. The Tigers haven’t pulled in a pair of quarterbacks that highly rated since. And Russell and Flynn did pretty well in purple and gold.

Interested in more national news? We've got you covered! See More National News
Previous Article BREAKING: Cruz Is Out
Next Article Now Kasich Is Out