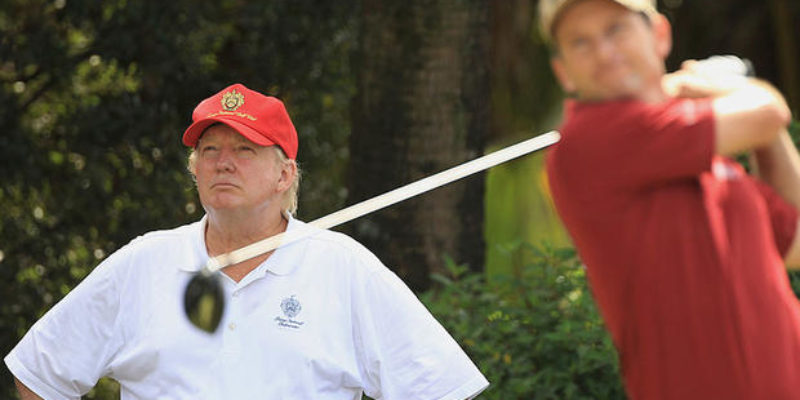 After five decades, the World Golf Championship will move next year from the National Doral golf course in Miami, Florida to a golf course in Mexico City. Since the Doral course is owned by the certain GOP presidential nominee Donald Trump, this decision smacks of political correctness.

At least most objective observers would surmise that politics played a role in this decision; however, such a motive was denied by PGA Commissioner Tim Finchem, who claimed that the tournament was unable to line up enough financial backers. According to Finchem, “It is a sponsorship issue. We value dollars for our players. So we make decisions that are in the best interests of our players.”

If the PGA is mostly concerned about money than why would they move the tournament from the course of a billionaire? It would seem that a billionaire like Trump would have been able to help the PGA line up sponsors. If only Finchem and the PGA would have worked with Trump, there is little doubt that sponsors would have been secured.

After being questioned by reporters, Finchem asserted that politics was not involved in “any way, shape or form.” In reality, the sponsorship excuse was a poor cover story. It is clear that the decision was made for purely political reasons. Finchem, a pathetic pawn of liberal activists, moved the tournament because Trump is a lightning rod for controversy and made several harsh, but truthful, comments about some of the illegal aliens pouring across our country’s border with Mexico.

According to the “PC” police, Trump is also anti-Hispanic because he wants a border wall with Mexico and wants to crackdown on illegal immigration. Moving the tournament to Mexico is a great way for the PGA to pander to Hispanic activists and show love to this supposedly aggrieved group.

In fact, it is the second tournament that the PGA has moved from a Trump course. Last July, the PGA moved the Grand Slam of Golf from Trump’s Los Angeles area course. The move was made right after Trump entered the presidential race and faced blistering criticism for his remarks about illegal immigration. Instead of standing by one of their hosts, the PGA quickly pandered in the face of criticism and yanked the Grand Slam of Golf from Trump. Ultimately, the event was canceled when the PGA could not locate an appropriate venue as a replacement. The PGA deserved the embarrassment for their hasty decision to cave under pressure from radical activists.

After learning that another professional golf tournament had been moved from one of his courses, Trump quipped that tour should make sure they have “kidnapping insurance” to protect the players in a country overrun by notorious drug cartels. The boneheaded commissioner said that the tour probably did offer the kidnapping insurance, but that “it’s something we might not want to advertise.”

For a variety of reasons, moving the event to Mexico makes no sense. Most importantly, there could be serious security concerns about playing the tournament in Mexico City. Players could very well become targets for the drug cartels and the bands of criminals that run rampant in Mexico.

Logistically, moving the tournament to Mexico will also be a challenge for players because the event preceding the World Golf Championship is in Florida. Players will be inconvenienced by forcing them to travel to Mexico City.  The decision to move was made without much, if any, input from golfers, who mostly vote Republican, according to anonymous surveys. In fact, two-time US Open champion Andy North claimed that many players may skip the tournament altogether now that it has been moved to Mexico.

With this change of venue, the PGA has now been exposed as another liberal, politically correct sports organization. It joins the ranks of the NFL that features Black Lives Matter supporter Beyoncé during the Super Bowl halftime show and the NBA that wants to move the All-Star game from Charlotte North Carolina because of the state’s new law regarding transgender bathrooms.

Ironically, the new host of the tournament will be Ricardo Salinas, a billionaire who was fined $7.5 million by the Securities and Exchange Commission and banned from serving in a leadership position with any U.S. listed company for five years. These actions result from a settlement arranged after he was charged in 2005 in a “complicated case of self-dealing,” according to Golf.com.

The PGA must view the baggage of Ricardo Salinas as less troubling than Donald Trump’s campaign rhetoric. Thus, this was not a choice motivated by good business sense, but by political correctness. In today’s world, “PC” decisions are made to placate radical activists and media commentators, regardless of what fans or players want.

Sadly, it is a “Brave New World” and the commissioners of sports leagues are just as infected as the leaders of media, business, government, higher education and the other pillars of our society. These outrages will continue until the silent majority of people who are disgusted by this political correctness rise up and say “enough is enough.”

Interested in more national news? We've got you covered! See More National News
Previous Article HITHER AND YON: Joe McCarthy Would Have A Ball With Louisiana’s Newspaper Editors
Next Article PRAGER U: Don’t Follow Your Passion