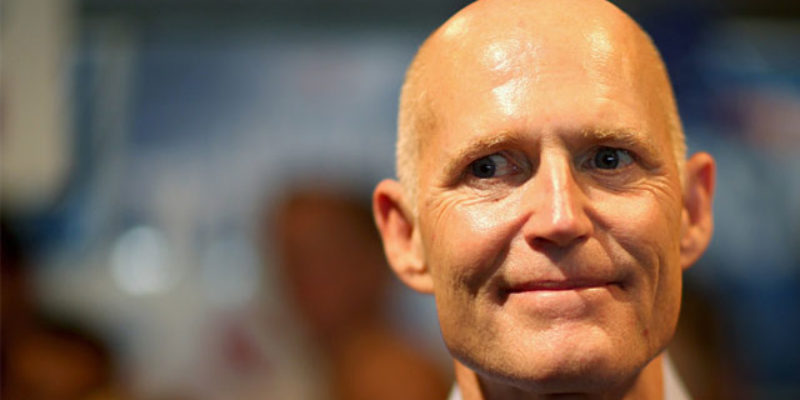 He said he was going to come to Louisiana on a “trade mission,” and now he’s doing it.

Hoping to capitalize on Louisiana’s budget woes, Florida Gov. Rick Scott is planning a trade mission to that state next week to try to convince businesses there to move to the Sunshine State.

His visit comes after Louisiana Gov. John Bel Edwards, a Democrat, called the Republican-led Legislature back for a special session on Monday to reduce tax breaks and raise other revenues to plug a $600 million budget shortfall. Already this year, Louisiana has raised it sales taxes and increased taxes on cigarettes and alcohol and reduced other tax exemptions for various businesses.

“As Governor Edwards continues to rally behind tax increases and bad business policies, we stand ready to help Louisiana companies grow and create jobs in Florida,” Scott said in announcing his trade mission. “Florida has added over one million new jobs and our job growth rate is growing almost 60 percent faster than the national average. Many Louisianans already vacation in Florida, and they will save more of their money by moving their businesses to our state.”

Scott’s office said he will visit New Orleans and Baton Rouge but did not say which companies he is targeting while in those cities.

If you’ll remember, when Scott first hinted that he’d be taking a trip to Louisiana to promote Florida’s superior tax environment and attempt to attract jobs and capital out of Louisiana and into the Sunshine State, something Bobby Jindal used to do to other states with Democrat governors, Edwards went ballistic and put out a press release that was personally insulting to Scott. It was a classic case of rabbit ears which, as this week’s dust-up with Alan Seabaugh showed, is the signature pattern of Edwards’ governing style.

So your optics will be that while Edwards is at the Capitol attempting to convince legislators to make Louisiana’s tax climate even more inhospitable to earning a living, Florida’s governor will be traipsing around in the state’s two largest media markets doing photo ops at large employers and promoting Florida as a refuge for capitalists from the Bayou State.

Even the Edwards stenographers at the Advocate and Picayune will have to note that Edwards looks like a loser in the exchange, and the more vitriol he pumps in Scott’s direction the worse it will get.

Maybe Edwards can dig up some hookers who knew Rick Scott 15 years ago and make a big deal out of it. He ought to put his media people on that project.

UPDATE: This, apparently, is the best Edwards’ crowd can come up with on short notice…

Richard Carbo, a spokesman for Edwards, said when Scott visits, he should meet students and families who are “paying the price” for the failed policies of previous Gov. Bobby Jindal that resulted in a budget deficit. Jindal and Scott are friends, and Jindal campaigned for Scott’s re-election.