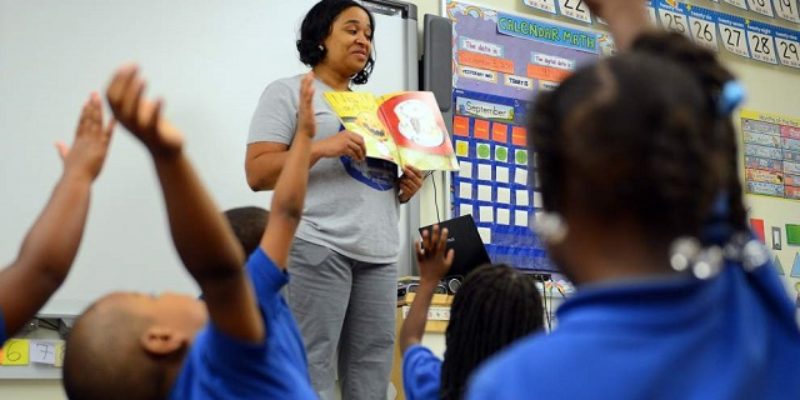 Unfortunately, we are not making that up. Slate actually published an article today claiming that New Orleans teachers were too white and too out of town.

After Hurricane Katrina, New Orleans’s mostly black teaching corps were fired. Also at the time, the Orleans Parish Public Schools were among the worst in the nation so that was overdue.

Now the charter schools and Teach for America, which have largely replaced the Orleans Parish School Board, are struggling to find more black teachers. The vast majority of students in the charter schools in New Orleans are black so that makes sense.

However, Slate says that the charter schools are hiring mostly white teachers at the expense of largely black teachers. The proposed solution appears to be to bring back the same teachers who failed pre-Katrina.

Convincing veteran educators to teach at a school like KIPP Central City isn’t easy, regardless of their race: Charter schools don’t participate in Louisiana’s pension program. They demand grueling work schedules, which make maintaining work-life balance difficult. Foster says her mother probably wouldn’t want to work at a school with no union representation and work schedules that can extend into evenings and weekends.

And then there’s the rising cost of living in New Orleans. Rent has skyrocketed,squeezing out even middle-income families, many of whose members once worked as teachers in the city. “The people who lost their jobs were black. And the people who can’t move back are majority black,” says Luis Mirón, the director of the Institute for Quality and Equity in Education at Loyola University New Orleans.

But even considering these obstacles, charter network leaders could be doing more to tap local—and diverse—talent, says Andre Perry, a former New Orleans charter network leader who now writes and speaks widely on education. “They’re not willing to apply the ‘no excuses’ model in recruiting a workforce in the same way they educate children,” he says. The first recruitment effort begins in the schools themselves, says Perry. And if the pool of local talent isn’t growing, it could be because graduates don’t feel good about their schools. Perry suggests that charter schools focus their efforts on local people and universities, and that they be willing to take chances on people, training and retraining candidates once they’re in the door. “And the fact that we don’t is an indication that we don’t believe local and black folk are worth the investment,” he says. Despite shifts in demographics, nearly 60 percent of New Orleans’ population remains black. “Go after them,” Perry said. “We’re here. We’re not going anywhere.”

[…]Meanwhile, charter school leaders have considerable work to do when it comes to rebuilding trust with veteran educators in New Orleans. Teachers, who made up a major portion of the city’s black middle class, had their livelihoods yanked out from underneath them at their most vulnerable; while their city drowned, they were quietly discarded and replaced.

It wasn’t just the bad optics of a mostly black teacher corps becoming, within just a couple of years, whiter and younger than ever. For some, it was a blunt act of disrespect; outsiders flocked to the city to rebuild that which they did not know, without seeking the wisdom of those who had worked there for decades.

New Orleans needed to start from scratch on education. That was not a bad thing and it was actually a good thing these new charter schools largely ignored the proven failures from the Orleans Parish public schools. It is certainly nothing to be ashamed of and the writer of the Slate article, Alexandria Neason, is a fool if she thinks otherwise.

For what its worth the charter schools are bringing in more black teachers because that’s what the market is demanding. The mostly black students like and relate to them more than the white students. We should keep letting the market work.