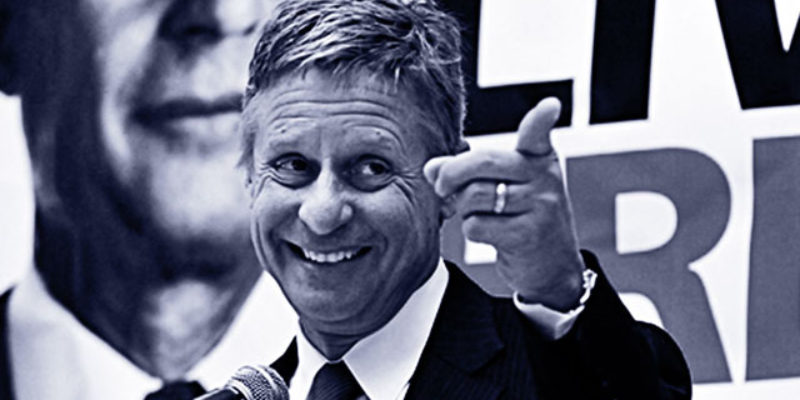 Note that I am not predicting this year’s election to break for the Libertarian Party. Those who know me are aware that I don’t smoke weed or ingest mind-altering narcotics. And I’m writing this in the morning, far before I’d have any opportunity to get into the bourbon.

I’m not telling you Gary Johnson will be the 45th president of the United States.

What I’m saying is he now has the opportunity to become the wild card in the presidential race who turns it into a three-way contest and upsets the balance between the Republicans and Democrats. It’s up to him to make the most of it.

I say this because I’m looking at the polls. For example, here’s the latest Reuters/Ipsos survey, the sample of which was taken from Friday to last night…

Trump beating Clinton in the Reuters poll, which a month ago had her ahead of him by 11 points, is a big deal. But notice that Trump’s support in that poll has only jumped from 33 percent to 39. He’ll take it, certainly, but the change comes more from Hillary losing support. She was at 44 percent at the beginning of the month and she’s at 37 percent now.

Typically you would expect candidates to eat into the undecideds as a means of gaining support during a campaign. It’s unusual to see a candidate drop seven points.

But that’s what Hillary is doing. This is happening to her because when the country saw that she had clearly broken federal law with her e-mails but that the corrupt Obama administration was giving her special treatment and not prosecuting her for it, it didn’t sit well. And it’s happening because the latest crop of revelations, courtesy of Wikileaks via the Russian intelligence services, coming from a hack of the Democrat National Committee’s e-mail server shows that her party is corrupt and rigged the primary process to deny Bernie Sanders an honest chance at the nomination.

And it will continue happening because the next shoe to drop on her will be as a result of the Clinton Foundation, and the apparent pay-for-play scam she ran as Secretary of State whereby donors to the foundation bought access and influence to American foreign policy – and this included some people who merit absolutely no access or influence to American foreign policy at all.

Not to mention Jeffrey Epstein and Bill Clinton’s relationship with him – and specifically how often Bill rode on Epstein’s plane to his island of teenage sex slaves. That could break wide open at any time.

These are all things Hillary Clinton is going to have a very difficult time tamping down. Why? Because she is distrusted by the American people and has no credibility with us. Americans struggle to agree on any political issue, and yet 68 percent of us think Hillary is dishonest. How you fix that, I have no idea – and the CNN poll linked above had Hillary at 45 percent. That means something like 13 percent of those polled thought she’s dishonest but will vote for her anyway.

Does that sound like solid support to you? It doesn’t to me.

All this would indicate an election moving in Trump’s direction. Right now that’s probably true.

But Trump is his own worst enemy. Just yesterday he was asked a fairly simple question by Bill O’Reilly about a potential raise in the federal minimum wage, and it was fairly obvious his camp had given him marching orders on that question which were indeed sound; namely, to claim rightly that the minimum wage is a state issue and should be legislated at that level or even locally, if for no other reason than that the cost of living in a place like New York probably suggests a higher minimum wage than in other less-expensive places.

That was a perfectly defensible answer, and yet when O’Reilly pressed Trump on the question he fell apart and began babbling about a $10 minimum wage at the federal level.

Now, the minimum wage is an economic issue, and modern-day Americans are shockingly ignorant of economic issues for some reason. Thirty years ago there was relatively broad understanding that raising the minimum wage made for more difficulty in onboarding people into the labor force, and therefore if there was to be a minimum wage it needed to be very low. Now, there is a majority for raising it despite 40-year lows in the labor participation rate. So pandering to this ignorance isn’t bad politics. But doing so as the Republican candidate who’s supposedly a business genius is exceptionally risky, as it puts Trump’s own base supporters at unease.

That’s just an example. What if Trump gets pressed on other issues with a larger downside?

He has another problem. This hack of the DNC’s e-mails which has so wounded Hillary Clinton this week… have you heard every Democrat in the country whining that it was the Russians who did it? Well, they’re doing that for a reason. The counterattack on Trump is going to be that he’s in bed with Vladimir Putin, and there is a good deal of meat on those bones.

Trump, after all, spent the latter part of last week talking about NATO and how the U.S. shouldn’t be bound by its obligations under that treaty if a number of NATO members aren’t paying their fair share. He certainly has a point, but in the context of Russia attempting to muscle Latvia, Lithuania and Estonia – all three of whom are NATO members and all three of whom are, in fact, paying their share of the NATO costs – it doesn’t look good. Remember that the Korean War started in 1950 because Harry Truman let the North Koreans believe America wouldn’t fight for South Korea were she invaded, and the first Gulf War started in 1990 because the first Bush administration sent similar signals to Saddam Hussein about Kuwait. With all of that history and context, there is reason to raise one’s eyebrows at Trump’s statements – which he didn’t walk back in his O’Reilly appearance last night.

Then there is the question of Trump’s inner circle, and the Russian influence in it. Paul Manafort, for example, has spent his career in the service to interests connected to Putin, most notably his work for Putin’s puppet Victor Yanukovych, the former president of the Ukraine. That influence showed up with the GOP platform – the only thing in the platform Trump’s camp seemed to care about was the striking of a plank calling for American military aid to Ukraine as it fights off intrusions and invasion by the Russians. Add to that Trump’s foreign-policy advisor Carter Page, little-known in Beltway circles but a paid consultant for Gazprom and an open advocate of Putin-friendly policy.

Then you have all the evidence that Trump’s chief source of financing for real estate deals in recent years is Russian oligarch money; the banks aren’t all that crazy about him anymore since the bankruptcies of his casinos, and he’s found a way around that problem by doing business with Putin’s pals.

Now Trump says he’s not going to release his taxes. You can bet that the Democrats will make a great repast of this and accuse him of all kinds of nefarious dealings. They should do this, because the refusal to release tax returns will create a vacuum of information, which they will happily fill. They’re good at that sort of thing, and there should be no question what’s going to happen before this election cycle is over – Trump’s tax records will leak.

Which is to say that Hillary’s chickens are coming home to roost, just like Trump’s will. And that’s going to make it difficult for either one to really get a hand up on the other. Both are so problematic as candidates that when one suffers a rough news cycle it doesn’t necessarily inure to the other’s benefit.

And that means an opportunity for Johnson. He doesn’t even have to be a good candidate, which is fortunate for him because he isn’t. He just has to be Not Hillary and Not Trump, which he is, and somewhat credible, which he is. Johnson was, after all, a fairly successful governor of New Mexico (and New Mexico is a breath of fresh mountain air when the other two candidates are New Yorkers) and he built a reasonably large construction business out of nothing. He comes off as awkward and a little creepy, but that’s apparently not a major problem when one looks at the competition.

Let’s face it, the voters aren’t afraid to fly their freak flag this year. Bernie Sanders got almost half the vote in the Democrat primaries, after all, and Sanders sounds like the Aardvark from the old Pink Panther cartoons – not to mention his political agenda stolen straight out of the Soviet constitution. And Trump managed to knock out 16 pretty well-qualified Republican candidates with a repertoire of insults and nativist rhetoric despite making gaffes Todd Akin would blanch at.

The challenge for Johnson is making people believe they have a third option. That could happen if he’s able to chisel off some support from dissident conservatives who can’t vote for Trump and dissident lefties who can’t vote for Clinton. He needs some Hollywood Democrats, and Mitt Romney. He needs the rumors about Jeb Bush backing him, and bringing Jeb’s money connections along, to be true. He needs delegates from both parties to show up at a press conference supporting him.

And he needs those poll numbers showing him as high as 13 percent to continue to rise.

Right now Johnson isn’t a line on every poll being offered to the public. If he is, and he’s consistently in the teens, he’ll begin getting the media to talk about him – and he’ll begin getting some money into his coffers. Nothing gets earned media like paid media – if Johnson goes up with TV ads, he’s going to get coverage. But as of June 30, Johnson’s campaign had all of $459,000. That’s not going to cut it.

But this is a strange campaign year. There is a ton of money on the sidelines. There are a ton of voters who don’t want to vote for either Trump or Hillary. It’s the perfect storm for a third party to disrupt the process. And if that were to actually happen, no one should be surprised.

After all, while this is something of a goofy message it would seem to resonate a little…