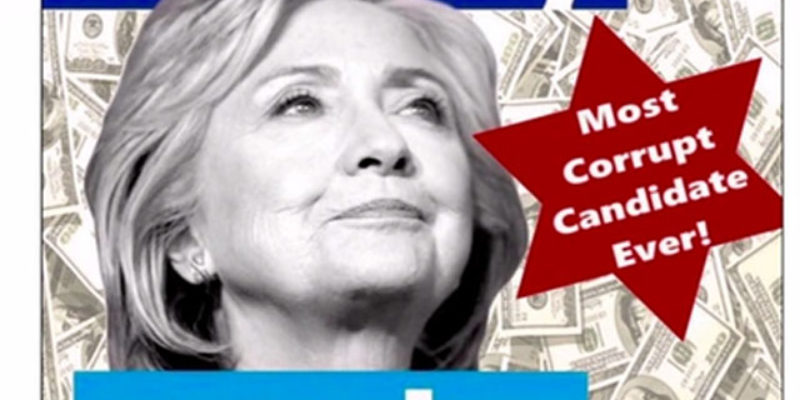 One of the most pointed arguments against Donald Trump as the Republican nominee from his critics on the Right derives from his use of “earned media” – that is, new coverage of his campaign – as a nearly-exclusive vehicle for getting his message out. Trump’s campaign to date has been largely run on a string; he spent far less than several of the other Republican heavyweight candidates in the primaries and was able to get away with almost no paid media advertising because he got some $2 billion worth of earned media from the cable news and broadcast networks. That was some five to six times more than his nearest GOP rival Ted Cruz, and almost three times Hillary Clinton’s earned media coverage.

The argument went that Trump was able to run on media attention and not much else for two reasons – first, that his unpredictability on the stump and willingness to make controversial statements made him good for ratings, and what is normally a fairly sleepy primary election process took on a much higher profile for the cable news channels. Trump facilitated a confluence of the news networks’ laziness and thirst for ratings; all they had to do was to point the camera at him and let him talk, and sooner or later he’d say something they could spend the rest of the day chewing on.

And the second reason was that if the media could allow Trump to monopolize the GOP primary process and earn the nomination, they could use the time they spend covering him to tear him down and pave the way for Hillary Clinton to be elected.

With Trump’s fundraising largely moribund and as such his ability to supplement his message with paid media virtually nil, he would therefore be defenseless once the media stopped fawning on him and resumed its usual role as Praetorian Guard for the Democrat Party.

We’re seeing a perfect example of this with the “six-pointed star” controversy over the weekend.

Here are the basics of the kerfuffle: first, news broke that Hillary Clinton was to meet with the FBI about her e-mail scandal as part of the government investigation into her manifest wrongdoing. Trump then put out a tweet noting that his opponent is the first to run as a major-party nominee while in the midst of a federal corruption probe, which is fairly standard stuff… 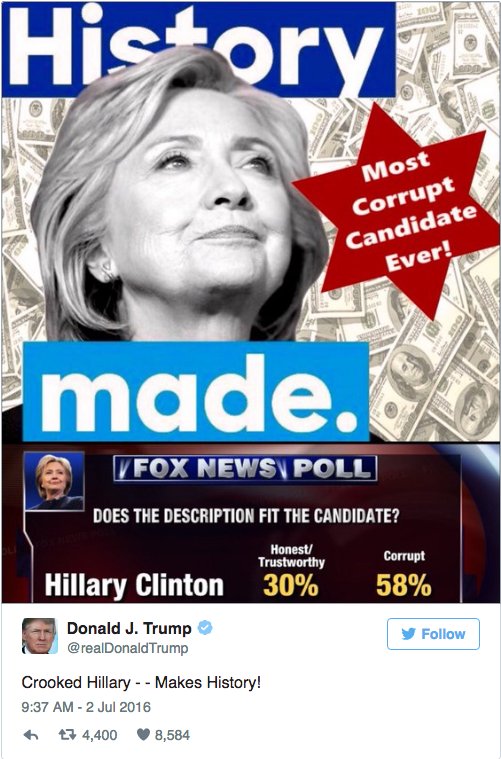 As soon as Trump put that tweet out on Saturday morning, he was set upon by the mainstream media. Why? Because his image contained a six-pointed star. And that obviously is a reference to Jews, and if Hillary is corrupt and there is cash in the background and a six-pointed star it has to mean Trump thinks it’s corrupt Jewish money Hillary operates on.

In other words, Trump is secretly with the neo-Nazis and skinheads. Or to put it more pointedly, Trump is Hitler.

The Washington Post’s Dave Weigel put up a long article Sunday (the New Orleans Times-Picayune reprinted it here, and we’re linking the reprint so that Jeff Bezos won’t demand money from you in order to read it) about how Trump got the image from the neo-Nazis and he has a long history of playing footsie with the anti-Semite and racist alt-Right crowd…

Trump’s official Twitter account shared the image, with no hint of the origin, at 9:37 a.m. Saturday. It came under fire immediately, with Trump critics like the conservative pundit Erick Erickson accusing him of “play[ing] to the white supremacists.” By 11:19 a.m., the tweet had been deleted, and the image was uploaded again with the star switched out for a circle.

That was more than enough time for critics and supporters to ask what exactly Trump was doing. On white-supremacist forums, Trump was cheered for apparently declaring his solidarity through not-so-subtle code.

“The evangelicals will listen to his pro-Israel statements, while we will listen to his signals,” wrote Andrew Anglin in the Daily Stormer, a racist site named after Julius Streicher’s notorious Nazi tabloid. “By pushing this into the media, the Jews bring to the public the fact that yes, the majority of Hilary’s [sic] donors are filthy Jew terrorists.”

But the skepticism of Trump critics was rooted in months of similar blunders. In November 2015, he tweeted a chart of bogus crime data from the fictional “Crime Statistics Bureau,” which wildly overstated how many white people were killed by black people. Charles Johnson, proprietor of the blog Little Green Footballs, traced the image to a Twitter user whose biographic information suggested that “we should have listened to the Austrian chap with the little moustache,” a reference to Adolf Hitler.

In January, Trump retweeted a meme of a destitute-looking former GOP presidential candidate Jeb Bush and a comment in February about his rallies from @WhiteGenocideTM, an account that lists its location as “Jewmerica.” In April, he retweeted a compliment from an innocuous-looking follower named Jason Bergkamp; a reporter from Fusion quickly discovered that Bergkamp had also praised Hitler.

“Trump support in the white-supremacist world is unprecedented,” said Richard Cohen, president of the Southern Poverty Law Center. “The typical white-supremacist opinion of politicians is ‘a pox on both their houses.’ No one deserves their trust. But in Trump, they’ve found a champion.”

On the campaign trail, Trump has repeatedly paid tribute to Israel and proudly noted that his daughter Ivanka is a convert to Judaism. But the ADL’s Greenblatt, disturbed by the pattern of anti-Semitic support for Trump, wanted to hear more.

Naturally, the Clinton campaign jumped into the mix…

Sarah Bard, the Clinton campaign’s director of Jewish outreach, said in a statement: “Donald Trump’s use of a blatantly anti-Semitic image from racist websites to promote his campaign would be disturbing enough, but the fact that it’s a part of a pattern should give voters major cause for concern. Now, not only won’t he apologize for it, he’s peddling lies and blaming others.”

Trump took down the image inside of two hours and then replaced it with a red circle including “Most corrupt candidate ever!” in white next to Hilary’s face.

But go to any national news site today, and what you will find is chattering about Trump’s six-pointed Star Of David tweet. Not the fact that the Democrat nominee had to meet with the FBI amid a heating-up of the federal probe into her e-mails and Clinton Foundation activities, and not the blatantly inappropriate meeting between Bill Clinton and Loretta Lynch on the tarmac at the Phoenix airport last week which casts a pall over the entire investigation.

They’re up in arms over an image in a tweet. Not the underlying rot at the heart of the Clinton campaign. And the narrative isn’t that Hillary is crooked; it’s that Trump, whose daughter is a convert to judaism and whose son-in-law Jared Kushner, who is Jewish, is one of his key personal advisers, is a closet neo-Nazi.

There are polls out showing Trump is actually gaining on Hillary at the moment. Obviously he would be; the meeting between Bill Clinton and Loretta Lynch, in its context, is so toxic that in a normal presidential cycle it would be like a nuclear bomb going off inside a campaign headquarters and the Democrats ought to be huddling this week in an attempt to decide who to parachute in as their nominee to take over amid Hillary’s implosion. The public understands, at least enough, how awful Hillary is and the more they see of her the more reluctant they will be to vote for her.

But if Trump thinks he can get the media to take his “Crooked Hillary” message and run with it the way it ran with “Lyin’ Ted” and “Little Marco” in the primaries, he’s getting a pretty good indication of how that’s going to go. They’ll vet the images in his tweets rather than the substance of what they say, and that’s just for starters.

Interested in more national news? We've got you covered! See More National News
Previous Article Al Sharpton Says ‘Don’t Tell Us How To Be Black’ As He Tells NOLA Crowd To Vote For Hillary Clinton
Next Article HITHER AND YON: The House Wins The TOPS Deferment Battle