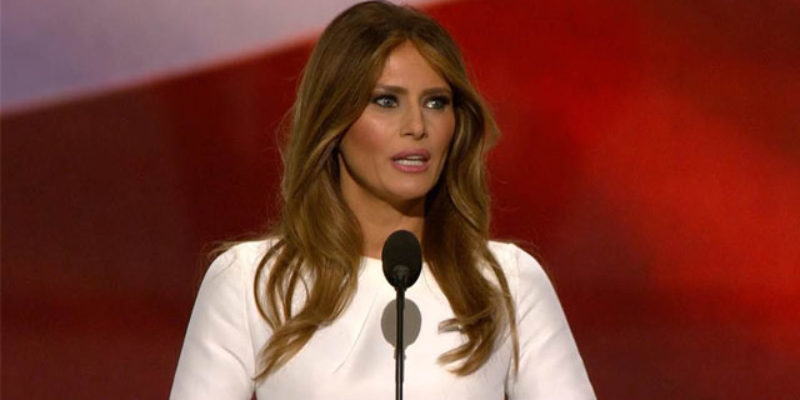 …there was this problem.

I taught speech for ten years. Even my worst students would not have done this: https://t.co/QhPPC8ENUA pic.twitter.com/co5VveF5cq

Less than an hour after it was over, the internet exploded with people recognizing two paragraphs of the speech by the Republican nominee’s wife as being essentially verbatim copies of the speech by Michelle Obama at the 2008 Democrat National Convention.

“In writing her beautiful speech, Melania’s team of writers took notes on her life’s inspirations, and in some instances included fragments that reflected her own thinking. Melania’s immigrant experience and love for America shone through in her speech, which made it such a success.”

But that came after this…

Melania Trump before tonight"I wrote the speech with as little help as possible" …LOLOLOLOL pic.twitter.com/mn1EK01Bec

And then this morning, Trump’s campaign manager Paul Manafort came out and said nothing happened, called the idea that Melania would have cribbed from Michelle Obama absurd and blamed the controversy on a scared Hillary Clinton.

"What she did was use words that are common words" — Trump campaign chairman on Melania's #GOPConvention speech https://t.co/N9gWKQuGSy

What to make of this?

Well, it’s a lie. But it’s an obvious lie, and one anybody telling it has to expect would be found out almost immediately.

So one of two things seems to be true. The natural conclusion would be that the Trump campaign is such a train wreck and a joke and so sloppy that slapping together a speech that includes purloined rhetoric from Michelle Obama is the best they can do. After all, Joe Biden ripped off speeches from British Labour party leader Neil Kinnock during his early fumbling efforts at national politics; this kind of cribbing is not unheard of.

But because it isn’t, any intelligent person has to be aware that cribbing a speech by a national figure from only two presidential cycles ago will be discovered. That’s a basic, fundamental mistake.

So if Trump’s people aren’t blithering idiots, and this controversy was ginned up on purpose, then what purpose?

It does defy explanation. You wouldn’t think the prospective First Lady’s speech would be the proper venue to start a controversy like this or to troll the Democrats with. And trolling is precisely what this is if it’s not a grade-school blunder.

What do you get out of this? You attract more attention to her speech, sure, but how is that attention a good thing? Nobody’s paying attention to the speech itself or more importantly the person giving it, they’re paying attention to the controversy. And denying that it was copied when two contiguous paragraphs in the transcript are word-for-word from that of the Michelle Obama 2008 address doesn’t say much for your credibility.

It comes off like an inside joke to Trump’s supporters. It’s almost as if the campaign is trying to assure the faithful that they can be as brazen and as ruthless as the Democrats, and get away with it.

But Trump doesn’t suffer from the problem of not being perceived as brazen and ruthless. His high disapproval rating comes from people thinking he isn’t trustworthy and that he’s a bad guy who screws people and he’s a hater. This – putting his wife up to plagiarizing Michelle Obama speeches, or even worse having a wife who does it herself – doesn’t help that.

Frankly, we can’t figure this out. And maybe there isn’t much to figure out. Maybe it’s just sloppiness and nothing more.

UPDATE: Or maybe, this…