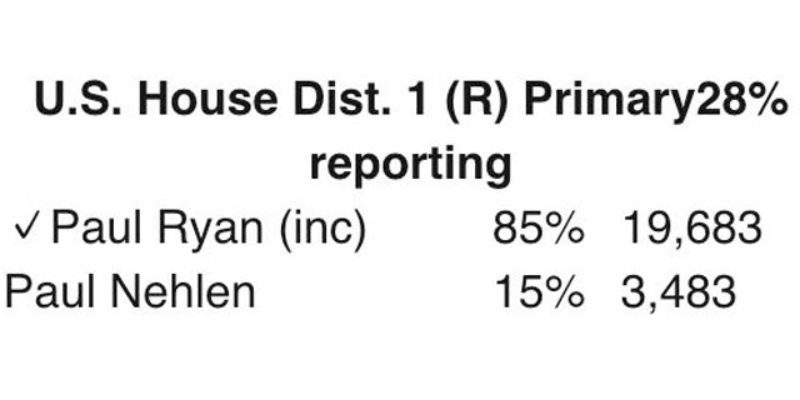 What those people will think we’re saying is that Ryan’s dominating 85-15 win over a Donald Trump facsimile in Paul Nehlen proves the GOP establishment is still in control of the party and that’s a good thing. At this point, given Trump’s penchant for gaffes and rhetorical diarrhea on policy the argument can be made that yeah, he is worse than the party’s establishment.

But we’re not here to defend the party establishment. The one thing the Trump die-hards had right is the same thing the Ted Cruz die-hards had right – which is that the GOP establishment is compromised, ethically corrupt and has lost touch with both its base voters and the American people at large, which is why this looks like the third presidential election in a row that the GOP won’t come close to winning the White House.

But for all of the failings of the establishment, the Republican Party has a fairly good track record of winning races across the country. House races, Senate races, governorships, state legislatures – this is a majority-Republican country at the state and local level for the most part, particularly if you take out the monolithically-Democrat urban political ghettoes our major cities have become.

And because of that, there is still a fundamental competitiveness for Republicans to win elections regardless of what happens at the top of the ticket.

The silver lining, then, is this – Republicans down the ballot aren’t as tied to Trump as the “experts” would have you think, and just because Trump might be a mess that doesn’t mean he’s going to be some major drag on the party’s ticket.

Paul Ryan gave Trump a tepid endorsement, and Trump gave an even more tepid one to Ryan, but neither endorsement fooled anybody – these two are in entirely different parties from a practical standpoint. Ryan is the opposite of Trump on trade and immigration and he’s the polar opposite of Trump in terms of political demeanor. Trumpsters, particularly those who were with him in the primaries, have settled on Ryan as the chief villain within the GOP now that Cruz and Jeb Bush are no longer in the way, and the things said about him would make you think he, rather than Hillary Clinton, is Trump’s opponent in the fall.

For his part, Ryan seldom holds back in discussing Trump’s shortcomings. He’s a bit more polite about his criticisms than Trump or his supporters are, though.

And Trump fan sites like Breitbart and Drudge had repeatedly touted Nehlen’s candidacy as some sort of harbinger of change within the GOP. Ryan was going to be “Cantored” last night, it would be a close race, etc.

Turns out none of that was true. Ryan won every bit as comfortably as anyone thought. At the end of the day, while he has his flaws, Ryan is as talented and charismatic a politician as the party has. And with 85 percent of the primary vote it’s clear that Ryan’s position is every bit as strong as it always was.

Which means that Republicans running for the House and Senate don’t have to tiptoe around Trump’s candidacy, and they certainly don’t have to have Trump tied around their necks. Ryan’s opposition to Trump didn’t hurt him one bit, and other Republicans running in Congressional races won’t be hurt either if they call out the party’s nominee for stupid or ill-considered statements while at the same time praising him when he’s correct.

Which sometimes, he is. You don’t have to support Trump to recognize not everything coming out of his mouth is offensive or misguided.

So the Kelly Ayottes, John McCains, Ron Johnsons and Pat Toomeys of the world don’t have to be dragged down with Trump. They can run their own races and win or lose on their own merits.

Another way to say this is no matter how rotten a candidate Trump might be, Hillary Clinton isn’t going to grow any coattails. She’s likely going to win this race out of sheer money and organization thanks to Trump’s appalling shortcomings on both, but that doesn’t make her likable and it doesn’t make her party more viable with independent voters. While her husband found a way to shine a plurality of the American people on (remember, Bill never hit 50 percent in either presidential election he ran; he won due to Ross Perot splitting GOP vote in both 1992 and 1996 as a third-party candidate), Hillary is little more than a candidate for the Democrats’ base vote – and she isn’t all that popular even with the Democrats’ base, many of whom were Bernie Sanders supporters in the primary.

So down-ballot Republican candidates, most of whom didn’t support Trump in the Republican primaries, can treat him as what he is – some guy who isn’t running in their race for the House, or the Senate, or the governor’s mansion. If the Democrats want to tar those Republicans with Trump, they can respond by tarring the Democrats with Clinton – and throw in some feathers to the tune that while Trump was an insurgent candidate who upended whatever more electable candidate they might have supported, the Democrats all but cleared the field for Hillary and openly embrace her corruption and flagrant lawlessness.

There is no reason to think Trump is going to be a major drag on Republicans down the ballot this fall, despite the “conventional wisdom” suggesting he will be. Ryan is proving that holding Trump at arm’s length and making it clear that Trump doesn’t represent all of the party’s thinking on most issues is a perfectly good way to handle him as a factor in a down-ballot Republican’ race.