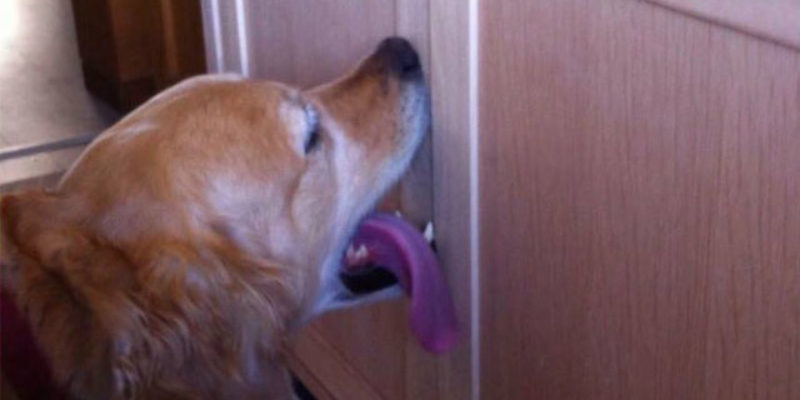 Stephen Green, perhaps better known as PJ Media’s Vodkapundit, found this gem on Twitter somewhere and posted it to his Facebook. Seeing as though it’s Friday and we’re exhausted with politics, we couldn’t think of anything more rewarding than passing it along so our readers could enjoy it as much as we did.

We trained the dog so that when he wants out, he goes to the front door and waits.

Somehow in his little golden retriever brain, he interpreted this to mean, ‘go to the front door, and lick it.’

If he’s at the door, but isn’t licking it, he doesn’t need out, he’s just chilling.

So, this was our routine – when he wants out, he goes to the front door, and licks it. And then we moved house, and he got very, very confused.

He knew he had to go to the front door when he wants out, but this was a new house with obviously a door that was completely new to him.

Despite our condo having only one door that leads outside, and him going out this very same door literally at least five times a day, every day, for about a year… he still has no idea where the front door is in this house. Absolutely no idea at all.

Now whenever he needs out, he will go to any random door and start licking it. And I mean any door — the bathroom door, my bedroom door, my closet, the goddamn door of a kitchen cabinet, even.

I don’t know if he’s really smart of really dumb. Because clearly, he understands conceptually what a door is. I don’t know if he thinks my closet or the kitchen cabinets lead to outside, or if he’s just hoping to find doggie Narnia, or if he’s just hopelessly given up on ever being able to find the door by himself and is just doing the best he can, but every goddamn time he wants out, he’s right there licking the glass door to the shower or something.

He doesn’t alert us he needs out any other way. So if you haven’t seen him in a while, you have to search room by room until you find him with his tongue pressed up against the linen closet because he thinks outside might be that way.

He’s the biggest, dumbest dog I have ever met in my life and I could not love him any more. He’s perfect.