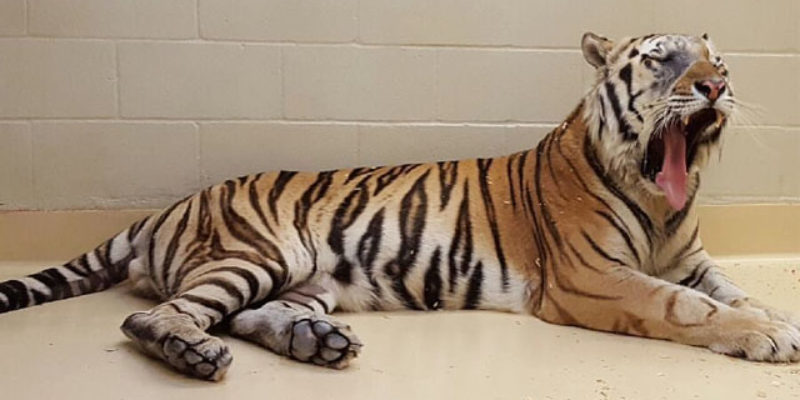 The body wasn’t even cold yet.

PETA has reiterated its call for LSU to end the use of live mascots.

The complete statement is below:

“This sad day could mark a kind new beginning for LSU, where sensitive, intelligent tigers have been reduced to game-day props for decades. PETA is calling on the university to honor Mike VI’s legacy by making him the last live mascot to be locked up in captivity and paraded around an unruly stadium. The last thing LSU should do is condemn yet another tiger to a lifetime of exploitation.”

This from an organization which kills more animals than perhaps any other, slaughterhouses excluded.

Would you like to hear from someone who actually knows something about tigers at LSU? Here’s a message from Dr. David Baker of the LSU Veterinary School, who is the caretaker of Mike VI and had the sad duty of putting him down early Tuesday morning to keep him from suffering with the cancer that had wracked his body…

To all of Mike’s friends, thank you for your love and concern for him, and for your prayers and support for his medical team. We all felt undergirded by you.

Many have asked what happened to accelerate our timetable for Mike’s euthanasia. Over the weekend, he took a turn for the worse. He became very lethargic, largely lost his appetite, and showed little interest in interacting with us. However, my greater concerns were: 1) as cats are prone to do, there could come a point where he just felt so badly that he might never reenter his night house, but instead go somewhere in his yard and just languish and die. In fact, this seemed quite likely. We could not allow that to happen. 2) he began bleeding quite a bit from his nose, indicating that the tumor was causing a lot of damage to his sinus cavity. We could not allow that to go on because it would eventually lead to his suffering.

I am sorry for those of you who were not able to see Mike VI before he transitioned into hospice care Saturday night but I simply could not risk letting him back out into his yard and then not being able to bring him back inside for care. While we probably could have nursed him along for perhaps another few weeks or even a month, that would not have been in Mike’s best interest.

As you know, Mike’s well-being was always our sole and complete concern. You might be comforted to know that even after receiving his anesthetic this morning, Mike VI was “chuffing” at all of us. This tells me that while he felt poorly, he was not yet suffering. As I promised, we would not allow that to happen. It also showed me that he trusted us to the end to care for him so that’s what we did. Thanks again.

The animal rights activists who pontificate to such a brazen degree and see fit to lecture LSU about “exploiting” an “intelligent, sensitive” animal by giving him a large $2.5 million enclosure to live in, the best food available, premium medical care and constant attention never actually knew Mike VI, nor did they take the time to learn much about him. Anyone who spent any time near Mike VI’s home could see that he was a happy fellow and a willing entertainer. The fact is, the tiger was a complete ham when it came to entertaining the crowds of visitors to his on-campus habitat. If he was “exploited,” it didn’t look like he minded.

As to his being “paraded” around the stadium, Mike VI only went into his trailer for a football game when he wanted to. When he didn’t want to, he didn’t go anywhere. Some cruelty. Previous Mikes seemed to enjoy the spectacle; this one didn’t and his handlers respected that.

It’s one thing for people to engage in social activism. Sometimes those pursuits lead to positive results, sometimes not. But it’s another thing altogether for a well-funded national organization to promote itself and its one-size-fits-all agenda on the backs of individuals that organization neither knows nor cares about.

There are tigers in captivity all over America and all over the world. Few, if any, are graced with the luxurious accomodations LSU affords to its tiger. PETA would deny Mike VII the opportunity for a better life than he would otherwise lead in some poorly-capitalized preserve or in a cage. That is real animal cruelty, and it’s disgusting.

UPDATE: Courtesy of WAFB-TV’s Jacques Doucet, here’s an image of Dr. Baker with Mike VI. So you’ll know how miserable the tiger was. 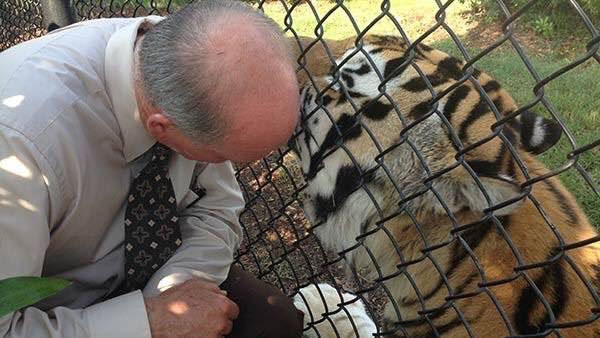 That’s the tiger, coming up to the fence at his enclosure and rubbing his head against Dr. Baker. These are the moments PETA would deny Mike VII.