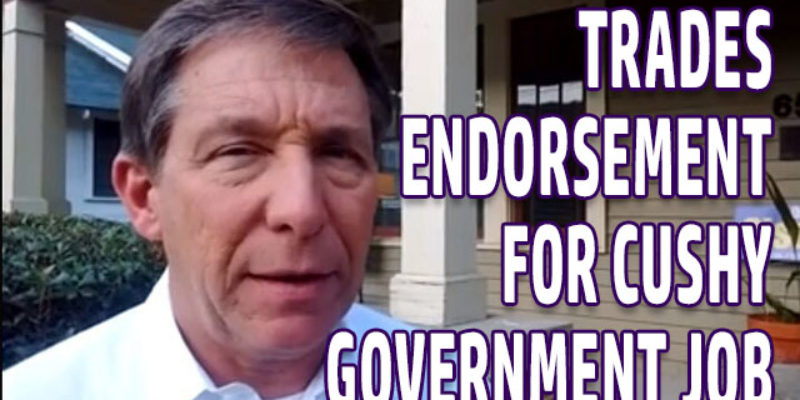 Is this a significant development in the Baton Rouge Mayor’s race? It might be, even though it isn’t wholly surprising.

Gissel got six percent of the vote in the primary, most of it from Spanish Town and the areas around downtown where there are crunchy white liberals receptive to his message of “togetherness” – which amounted to a campaign against the idea of a St. George incorporation without any thought to addressing the causes behind people wanting to incorporate the new city.

Gissel, who ran unaffiliated with a political party, finished sixth in the primary, but scooped up about 6 percent of the vote and carried three precincts around downtown, Mid City and LSU. His campaign focused on the need to get away from partisan politics, as he said they contributed to the many divides in Baton Rouge.

Gissel said Wednesday that he chose to back Broome instead of Republican state Sen. Bodi White because she’s a unifying and inclusive leader who will represent Baton Rouge’s diverse communities. Throughout his campaign, Gissel stressed the importance of the mayor’s power to convene.

He attacked White on the campaign trail for his previous backing in the Legislature of bills to create new school districts in the southeastern part of the parish, an unsuccessful push by residents there that eventually grew into the movement to create the city of St. George.

The interesting part about this is how stupid it is. White has repeatedly said he doesn’t favor a St. George incorporation – if you’re running for mayor-president of Baton Rouge of course you don’t, because a St. George incorporation would make your job a whole lot harder. What White has been for from the start was the ability of people living in unincorporated areas to have access to better public schools, and if that meant independent school districts he was for them. Which is why White brought the legislation to create the Southeast Baton Rouge ISD, and had it shot down.

Sharon Weston Broome played a big role in shutting it down. Guess what her rationale was?

Because there wasn’t a city to attach to the school district. That’s when the St. George movement got started – it was a metastasizing of the desire for an independent school district created by people like Sharon Weston Broome doing everything she could not to address the concerns of the people involved.

And here’s Gissel, who at one point was the head of the East Baton Rouge Parish Republican Party before he decided he’d rather be Crunchy Lefty Spanish Town Guy, backing Sharon Weston Broome because Bodi White is insufficiently opposed to St. George. White says he wants to avoid the St. George issue by attacking the underlying issues behind it, and as such he’s gotten support from people who were for St. George last year – and because those people are supporting him he’s unfit to “unify” Baton Rouge.

“During the primary I watched as Bodi struggled to explain his role in the St George breakaway effort,” Gissel said, adding that some of those who were vocal leaders of the St. George movement are now supporting White for mayor. “Perception becomes reality in politics. You simply can’t be perceived as a unifier if you are seen as being on a team of dividers.”

When you demonize a candidate because you disagree with some of his supporters, how are you not a divider?

Particularly when the absolutely most obvious thing in all of Baton Rouge politics is that if Sharon Weston Broome becomes mayor of Baton Rouge you will have a St. George incorporation on the ballot by this time next year.

So what Gissel has done by endorsing Broome is to endorse the formation of St. George while saying the opposite. He’s either a dunce or he’s got an alternate motivation – like, for example, a job in a Broome administration. He wasn’t offered that when he met with White’s camp for two hours last week.

And Broome, genius that she is, gave that game away in her statement…

“Darryl’s passion for bringing our parish together reflects my own strong desire to unite us around a plan and vision to reduce traffic and crime in the parish,” Broome said. “I look forward to working with Darryl in the campaign and hopefully in my administration.”

Whoops! Maybe you should have left that part out, right? The part about buying Gissel’s endorsement with our tax dollars?

It’s not known how many actual votes Gissel brings with him, and whether that could be decisive in the race. It could; we don’t know what the electorate for a December runoff will look like. But the endorsement would be worthy of a little more respect if it wasn’t backed by such transparent “Lil’ Dardenne” dishonesty.