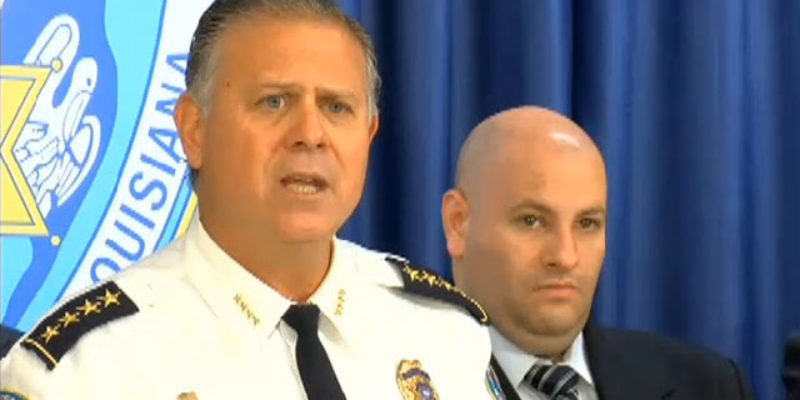 Jefferson Parish Sheriff Newell Normand lost it in the press conference about the Joe McKnight shooting. At first, he started out just giving the details of what happened. Here’s a video and a transcript, courtesy of RedState.

I just can’t not address some other issues that I am very much disappointed in the conduct of some of the citizens of not only this parish but this country. And at some point in time we’re going to have to come to grips with and begin to talk about this dialog and this rhetoric that’s going on in this country.

We started Thursday afternoon with a witness who lied. A witness who said [shooting suspect Ronald] Gasser got out of his car, popped cap through the windshield of Joe McKnight’s car, yanked him out of the car, and popped him again while he was on the ground saying he had voted for Donald Trump and he was going to show him… relative to that… and we were off and running.

And you know why? Because some people wanted that story to be true. And it’s what compelled me to have this press conference on Friday, to try to bring a sense of calm and reasonableness to this and to try to create a distraction from that because that was furthest from the truth.

And that started something going down a path that we collectively should be ashamed of ourselves. We began criticizing people just asking for pause. Let the process take its course. But, no, that wasn’t enough. We had to make demands. We want justice now. And if we don’t get it now and we don’t get it our way we’re going to start saying things and doing things until we get it our way. It’s not about the right thing. It’s not about justice. And it’s not about the process. It’s about what we want and what we want now. And we don’t care who we disparage in the process.

But then Newell Normand completely lost it. He started reading aloud some of the social media comments directed towards him and black politicians standing with him on the McKnight investigation, which just needlessly inflamed the situation a lot more.

Newell Normand is extremely thin-skinned, which is not something we need in a powerful law enforcement position. There was no need for the language or the reading of social media comments. All this will do is needlessly inflame the situation in Jefferson Parish.

Normand should’ve stuck to just relaying the facts of the Joe McKnight shooting and could’ve left off the color commentary. But it’s Newell Normand and he’s never been known for doing anything other than needlessly inflaming tensions.

Interested in more news from Louisiana? We've got you covered! See More Louisiana News
Previous Article Trump’s Coming To Baton Rouge On Friday To Support Kennedy And White
Next Article WAGUESPACK: Plenty Of Fodder For Pondering