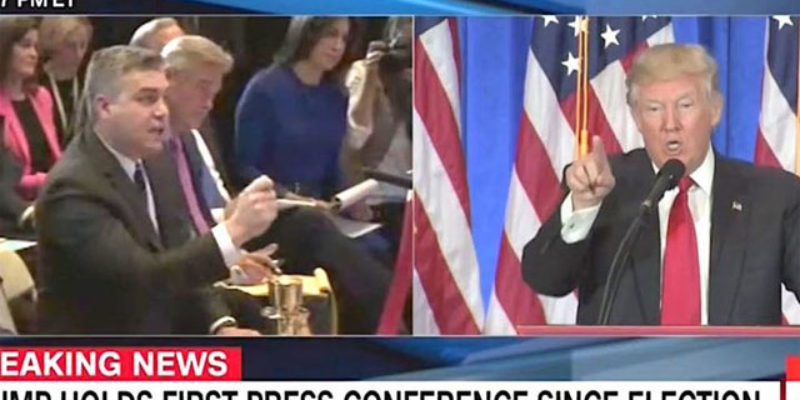 For eight years, the elite members of our national news media treated Barack Obama as a conquering hero, a political superstar who overcame racism and intolerance to become our first African American President. The clear majority of our media heavyweights idolize the President and agree with his liberal policies. Instead of tough questions, they offered him a regular dose of pathetic softballs at his news conferences. In fact, real journalists should be embarrassed at the deferential treatment Obama received during his two terms in office.

Despite the multiple scandals in his administration, there was a lack of investigative journalism from the major news outlets. Our vaunted media watchdogs turned into Obama lapdogs during his presidency.

Now that there will be a new President, these journalists are suddenly becoming reacquainted with their investigative instincts. Of course, their newly discovered journalistic “talent” is on display because Donald Trump is a politically incorrect Republican outsider who is not connected to the establishment of either party. He also possesses views which are conservative, populist and nationalist. Clearly, he is not a liberal or a globalist, like the members of the elite media.

It is obvious that the mainstream news media hates Donald Trump. They don’t like his positions, his personality or his ability to communicate directly with the American people on Twitter.

This disgust was apparent on election night as the network news anchors could barely disguise their revulsion at Trump’s victory. There were plenty of stunned looks from the smug anchors and their so-called expert analysts who had predicted a Hillary Clinton landslide.

In the weeks following the election, there has been no honeymoon for the incoming President. While the media usually gives an incoming President positive coverage in the aftermath of a victory, Donald Trump has faced an unrelenting stream of negative stories and abusive treatment.

On the day before the news conference, Trump was the victim of a vicious smear campaign in the form of a 35-page dossier that was published on the vile website BuzzFeed and promoted heavily on the “fake news” network CNN. While BuzzFeed published the entire contents of the phony report, CNN breathlessly hyped that the dossier was presented to the President and the President-Elect by intelligence officials in a briefing.

This unverified and fictitious report was produced by Christopher Steele, a former British intelligence officer, who was hired by an opposition research firm, Fusion GPS. First Republican donors and then Hillary Clinton supporters paid the firm to produce the anti-Trump report. The unsubstantiated “research” was provided by Russian sources, who were paid by Steele for the information. The report included factual errors and wild claims about Trump’s personal life and supposed business dealings in Russia.

Since it was so suspicious no news outlets should have even referenced the report. Unfortunately, many of our news organizations are on a vendetta to derail the presidency of Donald Trump.

The explosive Trump fairy tale became the major story of Trump’s news conference. It set the stage for a media showdown unlike any other since the combative Richard Nixon era.

Fortunately, at the news conference, Trump was in complete control and did not allow a rude and irritating Jim Acosta of CNN to ask a question. Acosta acted like a child by refusing to stop talking, continually interrupting Trump and trying to hijack the news conference.

Trump ignored Acosta’s loud complaining and labeled CNN “fake news.” Someone should have told Acosta that it was Trump’s news conference, not CNN’s news conference. Any politician, especially a President-Elect, has the right to direct his own news conference and select the reporters he wants to ask questions.

Acosta’s offensive conduct fits in perfectly on a network that regularly lambastes Donald Trump. CNN has a bevy of liberal hosts and guests and whenever the network gives a Trump supporter air time, he/she is outnumbered by liberal counterparts. To illustrate this left-wing bias, regular CNN contributor and avowed Communist Van Jones was given his own program this week.

Fortunately, viewers have options other than CNN, a network that has only a fraction of the audience of ratings leader Fox News. While it should be totally embarrassed, CNN is standing by their reporting of the Trump dossier and the antics of Jim Acosta. In response, Trump should ban CNN from his news conferences and make the liberal network even more irrelevant.