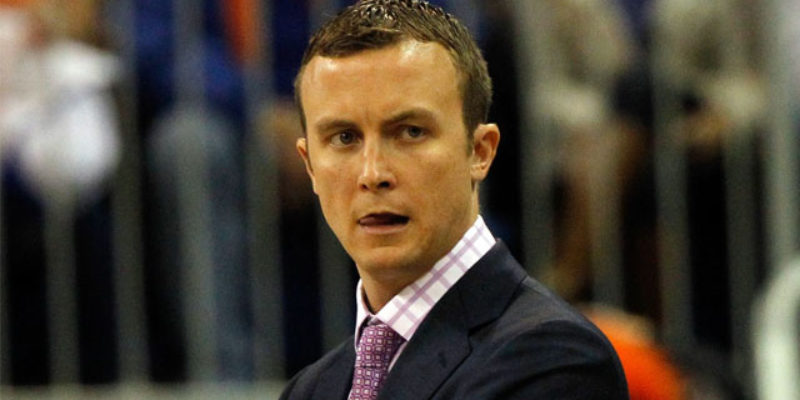 …as a potential replacement for Johnny Jones at the end of the current season. And yes, we’re told that while nobody in the LSU athletic department is speaking publicly on the subject, it is in fact a foregone conclusion that a change will be made after the SEC Tournament.

His name is Matt McCall, and he’s the 36-year old head coach at Tennessee-Chattanooga.

McCall’s team is 14-4 as of this writing, and his 5-1 league record has him tied atop the Southern Conference standings. Earlier this season he beat Tennessee 82-69; he lost to Vanderbilt 76-74 in a tight game in December. The other losses were at North Carolina, at home against Arkansas State (who is currently 12-6 and tied for third in the Sun Belt) and on the road at North Carolina-Greensboro, the team he’s tied with for the lead in the SoCon.

Last year McCall went 29-6; along the way he beat Illinois, Georgia and Dayton, before losing to Indiana in the NCAA Tournament first round. He was the Coach of the Year in the Southern Conference after that season.

Why are we throwing McCall’s name out other than his having a gaudy 43-10 record in a year and a half at a mid-major school? After all, it’s not like he brought Chattanooga up from nothing in no time flat – they were plenty good before he got there thanks to the efforts of his predecessor Will Wade, who left for the VCU job after posting a 22-10 record in 2014-15.

Here’s why. McCall, before taking the Chattanooga job, was an assistant for Billy Donovan at Florida. In fact, he came up at Florida as a student manager, then the head equipment manager, then he moved up to director of basketball operations, then he spent three years as an assistant to Mike Jarvis at Florida Atlantic before Donovan hired him back as an assistant in 2011. The three years McCall was a full-fledged assistant for Donovan were monsters – 26-11 and an Elite Eight appearance in 2011-12, 29-8 with an SEC Championship and an Elite Eight appearance in 2012-13, and 36-3, including an undefeated 18-0 in the SEC, and a Final Four appearance in 2013-14. That adds up to McCall having been a coach on teams which have gone 134-32 over the past five years, each of the first four of which has resulted in an NCAA appearance with this year not yet determined.

So he’s a Donovan protege, and he also has an LSU connection. We’re told that the voice in Joe Alleva’s head where it comes to basketball happens to be Deputy Director of Athletics Eddie Nunez; Nunez actually played a couple of years of college hoops at Florida, and was a graduate assistant there as well – all under Donovan. Nunez is said to be pushing McCall for the LSU job, and the sales pitch is that McCall is very much a young Billy Donovan in demeanor, work ethic and basketball style.

And here he is in March, prior to the NCAA Tournament…

If you’ve seen Chattanooga play you can see a lot of Donovan in McCall’s coaching. His team definitely comes from the old Rick Pitino press-and-shoot-three-pointers style Donovan learned as a player and coach for Pitino; they shoot 21 three point shots per game, which is a pretty high number, and they force a large number of turnovers from their opponents. McCall has two 6-10 players on his roster, one of whom (Justin Tuoyo) is a pro prospect, and nobody else who plays any appreciable amount of time is taller than 6-5. Chattanooga is athletic and fast and they run and gun. They’re pretty fun to watch – the style isn’t all that different from the way Jones’ team plays but the effort and discipline and structure about what they do is night-and-day better. It looks like an early Pitino team at Kentucky or what Donovan put on the floor at Florida. He’s known as an energetic recruiter, though so far he hasn’t done anything at Chattanooga to indicate he’s been able to bring recruits there above what you’d expect a Southern Conference team to reel in.

McCall was on the short list last year when Vanderbilt hired Bryce Drew to replace Kevin Stallings, so this wouldn’t be the first SEC job he will have had a crack at.

And he’s eminently gettable at LSU. While there are a lot of bigger-name coaches Alleva would have to pony up $2 million a year or more for, McCall’ contract at Chattanooga pays him $232,000 per year. There is no prospect of his turning down the LSU job if he’s offered what Jones is currently making; nobody turns down a $1.3 million raise. The only question about whether McCall could be had is if there is another job open after the season that he’s a finalist for – Missouri, for example, or South Florida, or perhaps Wake Forest could be three jobs in the South which might come available and have McCall as a candidate.

He’s not a huge name in the coaching profession, but McCall ticks off a lot of the boxes you’d look for – he’s young, he’s got a pedigree, he’s brought a mid-major program to the point where it can regularly beat power-conference opponents, he’s coaching in the NCAA tournament, he looks the part, he has successful SEC experience and he’s coaching and recruiting in the South. The downside of McCall is he didn’t build the program at Chattanooga; he’s improved on the foundation Wade laid in place there. Ideally if you’re hiring a mid-major coach you want someone who has built programs at two different places, or been at one program long enough to cycle through more than one group of players and still win – that way you know that it’s not just a question of a mediocre coach riding a couple of top-notch players to results better than he’d otherwise deserve.

And with McCall, he’s winning with Wade’s players for the most part. You could argue it’s a little premature to hire him and there is more meat for him to put on his resume.

On the other hand, the Billy Donovan pedigree and that three-year stretch with McCall as the associate head coach looks awfully appealing from where LSU sits. And with the state of the basketball program being what it is, Alleva really doesn’t have much to lose by taking a bit of a gamble on a hot young coach.

Don’t sleep on McCall as a possibility for the job. We’ll discuss other potential candidates as this season, and Jones’ LSU career, winds down.

Interested in more national news? We've got you covered! See More National News
Previous Article So Far In New Orleans, Shootings Are Up 80% And Murders Are Up 50% From This Time In 2016
Next Article The Red Bayou Show, Episode 70 – Featuring LSU Basketball And The Coming End Of Johnny Jones