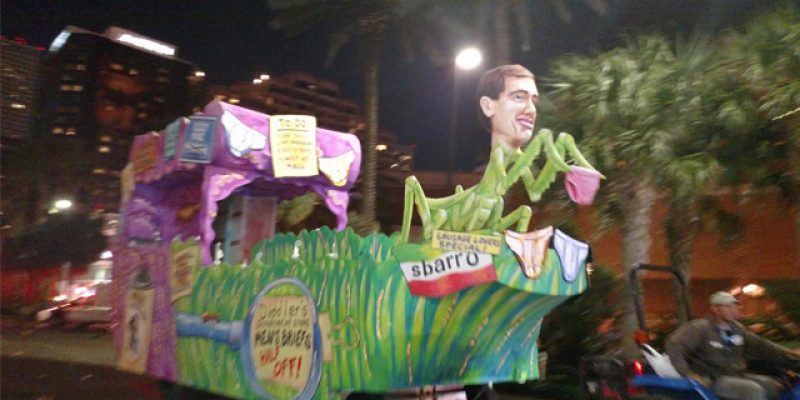 Mardi Gras is my favorite season. In fact it is the perfect celebration.

Unless you’re riding in a parade or if you choose to pay for parking, it’s free.

You don’t need to buy gifts; they’re thrown at you by the dozen and hauled home by the gross.

The food might not be as sumptuous as a Thanksgiving feast but it’s less expensive and dare I say tastes better.  I’m talking about you, Sophie B. Wright School, and your outstanding jambalaya that has been dearly missed since the building went under renovation.

The music might not be as moving as Christmas but unlike the hymnals you can dance to carnival.

Yet surprising to the unfamiliar, there is actually a religious angle to Mardi Gras: it marks the last big party or feasting before the sacrificial season of Lent, which starts at midnight on Ash Wednesday.

And psychologically Mardi Gras is far better for the spirit (though perhaps not so much for the soul).

People get depressed around Christmas, particularly those who are alone or just broke up with that special someone.  Nobody is alone during Mardi Gras, particularly on St. Charles and Napoleon avenues.

There is the spectacle of the floats, the marching bands, and the horse units. And to think New Orleans has weeks’ worth of these events (unlike the one day per year balloon show in Manhattan).

If you are bored in the 504 area code during Mardi Gras, it’s your own damned fault.

And then there is my absolute favorite aspect of Mardi Gras: political satire.

On the Thursday and Friday nights before Mardi Gras, three parades roll- Chaos, Muses, and Krewe d’Etat- that offer hilarious social commentary and mock the powers that be (and the powers that soon won’t be “dere no mo”).

Every year on Lundi Gras  I run a column ranking the top ten floats from the three satirical parades.  However, as the parade I was participating in rolled before Krewe d’Etat, I was unable to catch that group on the route though I did get quick glance at the unlit floats as they were being whisked away to their den.

In lieu of ranking the floats this year, I’ll provide a summary of some of the more noteworthy targets of ridicule.

If you’re in politics and you see your likeness featured on a Mardi Gras float, it means you have risen to a rank worthy of an organization investing thousands of dollars creating what is essentially a statue (though unflattering) that is positioned on the “bow” on the float in addition to the murals painted along the sides and rear.  It also means you may have also done something not so good that invited such raillery.

In the case of Jefferson Parish President Mike Yenni, he qualified on both counts.

Yenni was mocked by his opponent in the 2015 parishwide election for having an ostentatious campaign bus that featured his face.  In 2017, Yenni pulled a Carnival hat trick as his mug was plastered on floats in all three satirical krewes in the wake of a sexting scandal that had been rumored about for years but only recently came to light.  Muses, whose theme was Dr. Seuss, created a Yennax float while the zoo themed d’Etat portrayed him as a “Preying” Mantis.

However the float that likely elicited the most chuckles from those who attended a Catholic League school not located on the corner of Banks and Carrollton was Chaos’s “street parade” Yenni hit that was covered in references to the details of the scandal and imagery related to the politician’s alma mater.

Another sexting scandal “victim” Chaos had some fun with was ex-congressman Anthony Weiner, who was portrayed on a faux Oscar Mayer “wiener” float in a double entendre titled Peniston Street.

Sometimes someone can be praised in one parade’s float yet mocked on another krewe’s.

Sidney Torres IV, perhaps the most famous New Orleanian who has never worn a chef’s hat, played a musical instrument, or held public office, was positively referenced in Muses’ parody of New Orleans mayor Mitch Landrieu as a smarmy seussical huckster yet was featured not too kindly on d’Etat’s 101 Chalmations float as an interloper from “da parish” seeking to take over New Orleans City Hall.

Finally, not all the float themes are inside pitching.

To the men of Chaos and d’Etat and the ladies of Muses and their float builders, congratulations on once again providing outstanding biting satire and political commentary on a level the likes of Stephen Colbert can only dream of producing.