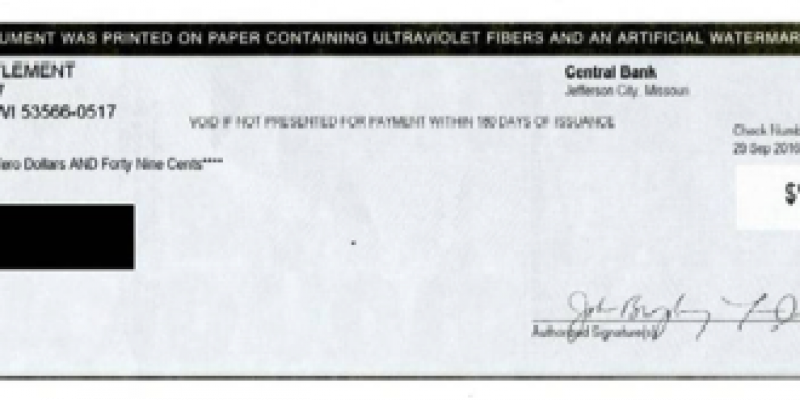 A curious piece of mail recently showed up in my mailbox.  It was an unexpected check for 49 cents from a class action settlement. Is this a joke? A scam? A mistake? Naturally, I turned to Google in search of an answer.

Apparently, I was included in a class action lawsuit against AT&T that I didn’t even know about—and I was not alone. There are hundreds of posts all over social media by people across the country who also received these absurd checks.

@JefferyMcLain from Ohio posted a Twitter pic of his check for $0.03 and sarcastically claimed “Victory!” Meanwhile a Virginia Facebook user posted a photo of his $0.54 check with the comment, “Chalk one up for the little guy! 54 cents of pure justice right here!” In another clever quip, @aimclickshoot posted an Instagram photo of her $0.09 check with the comment, “Time to buy the yacht! I just got a settlement check. #moremoneyspentonpostage.”

So how did we all become unwitting participants in this ridiculous lawsuit?

Several years ago a team of enterprising personal injury lawyers sued AT&T alleging it improperly charged its customers sales taxes on internet services and paid them to state and local governments. That’s right. They collected taxes they thought they were legally required to collect and paid them to the appropriate taxing bodies, then they got hit with a massive class action lawsuit. Makes perfect sense right? Only in America.

After several years of litigation, AT&T settled the case—probably because it was cheaper to settle than to defend. But with an estimated value of over $1 billion this class action was no small drop in the bucket for the national wireless provider.

So how did we get from $1 billion to $0.03 checks? While the settlement is being paid out to AT&T  customers across the country, court documents show a big chunk of the money has already been eaten up by lawyers and court costs.

With attorney’s fees set at 20 percent of all the refunds recovered, plus a $5,000 incentive award for every class member and full reimbursement of legal costs and expenses, the 92 personal injury lawyers who dreamed up this class action suit stand to make as much as $191 million off the case.  That roughly translates to about $2 million per lawyer.

That’s right.  The class action resulted in pennies for most class members and nearly $200 million for trial lawyers. And if that isn’t insulting enough, one of the lead attorneys involved in the case had the audacity to describe the deal as an “excellent solution for all parties.”

I beg to differ. From the vantage point of an inadvertent plaintiff, it seems the ridiculous settlement of this unnecessary lawsuit did nothing but further pervert our legal system and unjustly enrich a bunch of trial lawyers at the expense of the people they purported to represent.

Interested in more national news? We've got you covered! See More National News
Previous Article It Looks Like The Votes Aren’t There To Tap The State’s Rainy Day Fund
Next Article PRAGER U: Don’t Compare Yourself To Someone Else