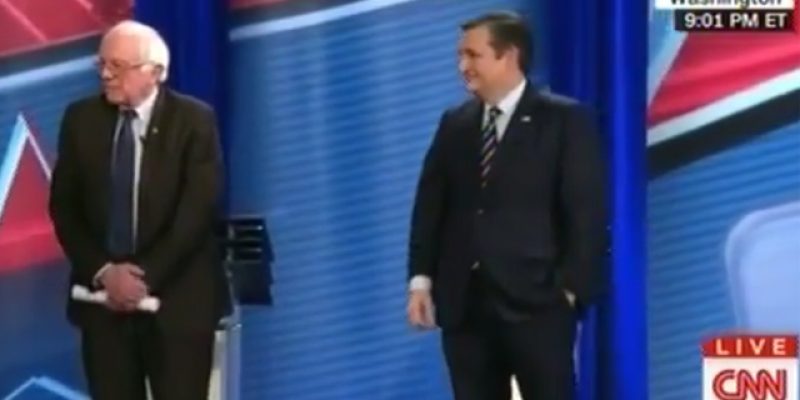 This goes a little more than an hour and a half, and it’s a pretty good debate from the standpoint of illuminating the two sides of the Obamacare debate…sort of.

CNN, which deserves credit for putting on a long-form debate on a major policy subject rather than the typical cable news food-fight consisting of dumbed-down talking points and snark tailored to fight five-minute segments between ads for denture adhesive and Pajamagrams, probably didn’t pick the best advocate for keeping Obamacare in Sanders. After all, though he was one of the authors of the bill the socialist senator from Vermont doesn’t actually defend all the worst parts of it – rather than to explain some of the items in Obamacare which simply don’t make sense Sanders dodges those points by shifting into advocacy for what he really wants – “Medicare for all,” or full-on socialized medicine.

Cruz is ready for that, and trots out statistic after statistic after horror story after horror story to explain how unworkable and deficient socialized medicine is, and he alternates those attacks with similar arguments against Obamacare. He prosecutes the case as well as you’d expect, despite getting a reasonably constant barrage of sob stories from questioners in the audience who are mostly Medicaid recipients who insinuate that they’ll be dropping dead in no time of their various illnesses if Obamacare is done away with.

Cruz answers those with the truth, which is that Medicaid is terrible insurance leading to poor medical outcomes and a great deal more denial of coverage than private insurance, which blows away one of the main arguments Sanders makes throughout the debate – namely, bitching about how private insurers will screw you every chance they get and deny you coverage. Statistically that is far, far less likely under private insurance than under Medicaid, or Medicare for that matter, but facts aren’t big things to Bernie.

The best part of the entire debate is an unintentionally humorous exchange between Sanders and an audience questioner, a woman from Fort Worth who owns a handful of hair salons and employs 49 people who can’t grow her business because to do so would force her to provide health insurance for her employees which her business model simply cannot support. She says she can’t even afford health insurance for herself, much less any of her employees because it’s so expensive under Obamacare, and asks him how she’s supposed to grow her business with this law in place.

It’s humorous, because no business owner in their right mind would ever go to Bernie Sanders for advice about how to grow her business. The household cat is a better source of business acumen than Bernie Sanders is. But it’s also humorous because rather than handle the question Sanders actually becomes hostile, and incredulous that this woman would dare operate a business that didn’t supply its employees with health insurance. With all the time he criss-crossed the country campaigning for president he never seemed to interact with small business owners or listened to their problems.

By any objective examination this debate was a vivisection, and a savage beating. It validates to a large extent the “rigging” of the Democrat primary process to keep Sanders from winning it – because while early opinion polls showed him winning over Cruz or Trump it’s patently clear that Sanders isn’t capable of sustaining his arguments against Republican opposition. He can spout socialist platitudes at rallies full of baristas and unemployed guitarists, but when it comes to explaining how to run a country he’s as empty as a balloon.

If you haven’t seen this debate, make the time. It shows why the Democrats are out of power – they’re out of ideas and certainly out of effective advocates for them.