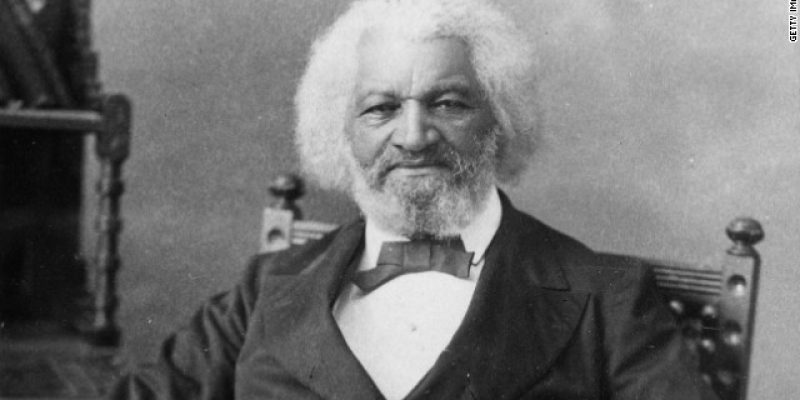 “I am a Republican, a black, dyed in the wool Republican, and I never intend to belong to any other party than the party of freedom and progress.” Such were the words of Frederick Douglass who was, in my opinion, the greatest American. As Black History Month begins, all Americans would do well to know the story of this inspirational and inspiring man.

Douglass was born into slavery in February of 1818 (the exact date is not known; he chose to celebrate his birthday on February 14). Douglass was taught the alphabet at age 12 by his master’s wife Sophia. Sadly, Sophia’s husband Hugh convinced her that teaching slaves to read would encourage their desire for freedom and she began removing reading materials from Douglass’ grasp. Douglass’ desire to learn, however, continued, and he began teaching himself to read and write. Douglass was able to get his hands on a copy of The Columbian Orator, a reading and writing textbook, and the speeches included in it began his journey of self-discovery, where he understood what slavery was and why it was so morally reprehensible. This self-education led him to teach the New Testament to fellow slaves in his own Sunday School class when he was sold to another owner.

After multiple attempts to escape to freedom, Frederick Douglass was successful in 1838 by boarding a newly minted train to the north. The next year, he became a licensed preacher, which helped him hone his oratory skills that he became so well known for. He began attending meetings of abolitionists in Massachusetts, which led to his meeting with well known abolitionist and editor of The Liberator, William Llyod Garrison. Garrison encouraged Douglass to become an anti-slavery lecturer, and at 23 Douglass gave his first speech about his life as a slave. At 27, he published his first autobiography. Despite critics openly questioning whether a black man could write a book eloquently, the book became a bestseller and was translated into French and Dutch and published in Europe. He spent a great deal of time in Europe, giving lectures in churches and chapels. Some of the venues were so full, they were described as being “crowded to suffocation.” It was while in Britain Douglass became legally free when British supporters of Douglass raised enough money to buy his freedom.

After his return to the United States, Douglass began publishing the abolitionist paper The North Star. The motto of the paper was “Right is of no Sex-Truth is of no Color-God is the Father of us all, and we are all brethren.” In 1848, he was the only African-American to attend the Seneca Falls Convention, the first woman’s rights convention, and he gave an eloquent speech in favor of woman’s suffrage. In 1852, he gave what was widely considered the greatest anti-slavery speech ever, “What to the slave is the 4th of July?” Although he didn’t support him for re-election in 1864, Douglass was an advisor to President Lincoln during the Civil War on the treatment of black soldiers. In 1876 Douglass gave a frank speech on Lincoln that saw Lincoln’s widow, Mary Todd, in attendance. She loved the speech so much, despite its criticisms of the late President, that she gave Douglass Lincoln’s walking stick. During Reconstruction, he held several political appointments, and, after Democrats began to regain power in the South, fought one more time to hold his countrymen to their promise of equality.

In 1872, Douglass became the first African-American to be a nominee for Vice-President when the Equal Rights Party nominated him without his knowledge. He served as a New York elector in the same year, and in 1888 he received one vote for President, becoming the first black man to receive the honor for a major party. Douglass died in 1895, having fought for equality for men and women of all colors, and having sacrificed and accomplished much despite being black in an era in history where those of color lived in slavery. His story is more than the “American Dream”, and all of us, black, white, Republican and Democrat, should be inspired by this, the story of Frederick Douglass.