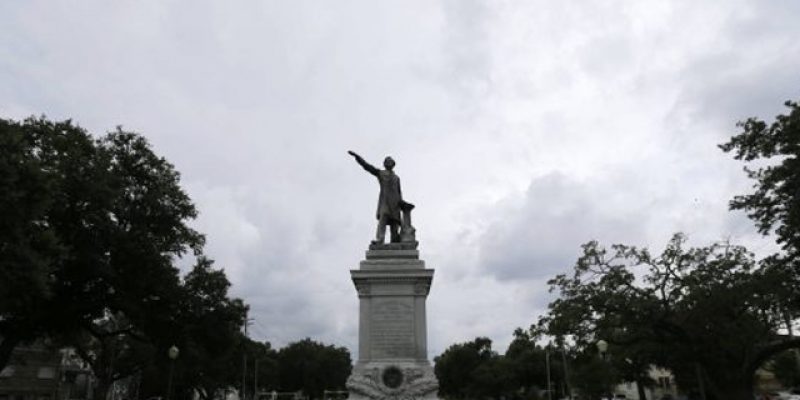 One need not be a descendent of someone who served in the Confederate Army to have am objection to the removal of southern military and political leaders.

Nor does one have to be from the south or even white.

Supporters for maintaining the monuments do not believe they glorify treason, slavery, or white supremacy, even if such slander is assigned to them by “professional activists” and media provocateurs.

Rather they are the milestones of a society that once was and are important and attractive part of the city landscape. They serve as a visible early chapter of the New Orleans story.

And most importantly, the Confederate monuments are literally the first line of defense against the future removal memorials and statues dedicated to America’s Founding Fathers. In fact before Robert E. Lee has even been unceremoniously knocked off his pedestal, the first shots in the war against the men who won the Revolution have already been fired.

BLM activist Shaun King, the perpetually offended conscience of the shameless New York Daily News declared that “No president who ever owned human beings should be honored.”

Three Democratic state parties have stripped the names of Thomas Jefferson and Andrew Jackson from their annual fundraising dinners because those presidents, who Democrats once credited with being the founders of their party, had owned slaves.

Malcolm Suber, local merde stirrer of the Take Em Down clown car that seems to be driving New Orleans as of late, has already issued a fatwa on Andy Jackson’s iconic equestrian statue in front of St. Louis Cathedral.

Suber decreed that the monument to the Hero of New Orleans represents white supremacy and not a commemoration of the military victory that saved the Crescent City from conquest by a foreign power and preserved the battered psyche of the young United States.

The advocates for bowdlerization self-identify as progressives.  And when it comes to this peculiar political movement that is overrepresented in the media and politics, the progressives never stop progressing.

There’s always a new monster to slay, even if said monster died two hundred years ago and is  considered the Father of Our Country.

The Left believes that the heroes of the past must be delegitimized and removed so as to create a vacuum for a new rootless society they can easily remold.  These are the ideological descendants of the Jacobins, who wrecked monuments, defiled graves, and guillotined those who didn’t get with their program.

And to further underscore their self-importance and absurdity, the Jacobins believed the world literally started with themselves and declared the birth of their murderous tyrannical “republic” Year One. Even the calendar needed to be politicized.

If the Confederate leaders fought for slavery and thus are “war criminals” and no longer permitted to be revered regional figures, what status will America’s earliest heroes will enjoy in the not so distant future?

If Washington, the indispensable man in the birth of America, all of a sudden becomes disposable due to political correctness, is his legacy also tainted beyond salvage?

You cannot separate the founders from their work- the Declaration of Independence, the Constitution, and, most significantly, the Bill of Rights.

Declare the men illegitimate and reclassify them as villains, do the laws and govern documents they left behind that serve as the framework of our government and our liberties retain any legitimacy?

After all the society and model of democracy by which they were adopted is not the same we have today.

As goes Jeff Davis and Stonewall Jackson, so will go Thomas Jefferson and Andrew Jackson unless patriots and defenders of American heritage stand athwart the progressives yelling stop.

In the case of Jackson, we are already in the midst of the fight over his place in the pantheon of American greats, having been booted off the twenty by the Obama Administration and “reconsidered” in a far less favorable light by academia and the media.  The Third Reich comparison recklessly applied to the Confederacy will be extended to Jackson as he will inevitably made out to be a backwoods Reinhard Heydrich.

To his credit, President Donald Trump has joined the fight to protect Jackson, going out of his way to publicly honor the seventh president via his Oval Office décor and recently paying a trip to the Hermitage and visiting Old History’s tomb.

In the event Left succeeds in clearcutting Confederate memorials from public spaces, people must be prepared to man the barricades to protect Jackson just as he held the line against overwhelming forces on the plains of Chalmette during the Battle of New Orleans.

Lest we find ourselves twenty years from now having a similar discussion about saving the Jefferson Memorial.