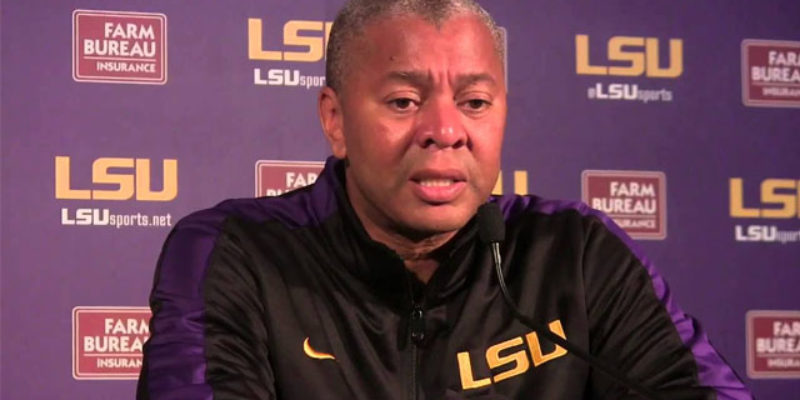 Our sources have been telling us for a few weeks – at least, most of the time – that this was coming, but finally, the Times-Picayune’s Jim Kleinpeter popped this afternoon with a story that Johnny Jones is out of a job following the end of this basketball season.

The end is near for Johnny Jones’ time as the LSU men’s basketball coach.

Multiple sources with knowledge of the situation told The Times-Picayune that Jones will be fired after the upcoming SEC Tournament. The Tigers play Mississippi State on Wednesday at 6 p.m. in the opening game of the tournament.

Jones has been on the hot seat since the end of last season but LSU’s performance this year hasn’t done anything to help. LSU is 10-20 this season with a 2-16 record in conference play.

In October 2014, Jones signed an extension with LSU that stretched his contract through July 2019 paying him $1.5 million per season.

What we’re hearing is, assuming Jones’ team loses to Mississippi State tomorrow night you’re likely to see a tersely-worded press release announcing the change – a press release you can probably write in your head if you’ve followed enough of this stuff (Johnny’s a great Tiger, we wish him the best in his future endeavors, things just didn’t work out, we’re going to go out and find the best basketball coach in the country and LSU fans will be proud, etc.).

We’re also hearing that LSU is going to pay significantly more for Jones’ replacement than the $1.5 million per year he’s currently pulling down. The word is LSU will go up to, or perhaps above, the $2.5 million a year mark, though the sweet spot is somewhere around $2.2 million if a coach can be had for that price.

Which is quite possible. The two names most prominently thrown around as possibilities to succeed Jones in the last few days are Notre Dame’s Mike Brey, who currently makes $1.7 million per year, and Virginia Commonwealth’s Will Wade, who makes about $1.4 million. An offer of $2.2 million to either could well be enough to move either one to Baton Rouge.

But what we don’t know is what the search process will look like, and whether it will involve a search firm or a committee of LSU stakeholders rather than just athletic director Joe Alleva. Alleva’s record in hiring basketball coaches is not a good one – he has now botched two basketball hires in Trent Johnson and Jones – and he ran what can only be considered a deficient search process last fall after Les Miles was fired (even if the resulting promotion of Ed Orgeron from interim head coach to the real thing does turn out well). Will he be given the authority to run his own search this time, or will others be involved? And who will those others be?

There has always been a body of thought that Alleva didn’t actually hire Jones, but rather was pressured into doing so by former LSU basketball coach Dale Brown and a number of alumni – among them Collis Temple and Shaquille O’Neal – who wanted one of their own in the job. As poorly as things have turned out following that process, one would think including stakeholders in the search wouldn’t work. But neither has Alleva acting alone.

The silver lining here is that almost anyone Alleva hires can be expected to do a better job than Jones, and that even after a season which is going to end with 21 losses LSU is an attractive program a quality coach can be found for. Hopefully whoever is making the hire can follow through, evaluate candidates properly and find a great coach to rebuild the program.

Interested in more national news? We've got you covered! See More National News
Previous Article John Bel Edwards Seems To Be Proving He Isn’t Much Of A Lawyer…
Next Article OBAMACARE: Look, Just Do Four Things…