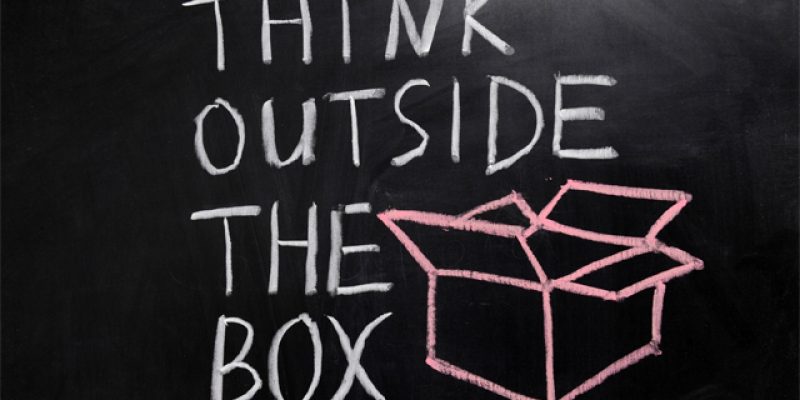 In the 1970’s, management consultants started using a new metaphor to convince companies they needed to think about their problems and potential solutions in a whole new way. To illustrate their point, they began to use what is called the “nine dot puzzle.”

The puzzle consisted of nine dots, equally arranged in three rows to make a box. The challenge was to connect all the dots using only four lines without letting your pencil leave the paper. The puzzle was difficult at first because most people felt compelled to stay within the box, but it became easy to solve the puzzle once they viewed the challenge differently and drew the lines to go beyond the boundary of the square. Hence, the analogy of “thinking outside the box” was born.

Today, we hear that concept frequently trumpeted by change agents as they describe the approach needed to fix perennial problems.

Edie Weiner, a national expert on the future of the economy, argues that 90% of what is needed to solve most problems is found in the box itself, though most people never see such solutions unless they learn to view problems through “alien eyes.”

She uses the term “alien eyes” because she thinks most people are constrained from seeing solutions right in front of their face due to “educational incapacity.” In this sense, most of us have become so educated on and familiar with our present challenges and situations that it has become almost impossible to predict a different future or solution. In short, we have stared at it so long we can’t see it any other way. Weiner says this is very common behavior and that our lifetime experience and earned knowledge is not only our greatest asset but also our greatest obstacle, restricting our ability to view problems through “alien eyes.”

One great example she uses to illustrate this condition is that of a newborn baby.

A few generations ago, a baby was captivated and energized by simply hearing “coochie-coochie-coo.” When most of today’s adults were younger, a playpen with a mobile and maybe a few stuffed animals were added to entertain us. Babies of today are literally grabbing after their parent’s smartphone at six months old, surfing the web before they hit two years old and riding around town in vehicles watching TV screens on the back of the headrest.

This evolution is easy to see, and it has profoundly changed the world that 21st century children know to be normal. From day one, they see the world much differently than we adults do. For today’s youth, having everything they need, want or desire easily streamed to them at will is not an evolution. It is an expectation and is essentially just the way the world has always worked for them.

We, adults, fail to see through “alien eyes” just how drastically different the world, or the box in this instance, appears to them.

For instance, imagine how confused they must be when they begin school and they find themselves in essentially the same type of school system our great-great grandparents largely experienced generations ago. Online content flows daily to handheld devices at any location on the globe (including airplanes), yet we still largely depend on buildings and books and to educate kids Monday through Friday. They probably also find it strange that we buy, sell, transfer and trade currency, sports tickets, movie passes, Christmas gifts, groceries and most other products on those same phones, yet government still requires bureaucracies and waiting rooms to methodically process driver’s licenses, government benefits and other necessary documents.

While we adults spend countless hours trying to think outside the box on ways to reform government, our children could probably easily give us some good ideas since they are not yet corrupted by the same “educational incapacity” of the ways things have always been.

The rapid technological progression of our society and deep connection to this reality by our youth from birth has completely transformed our families, behaviors and economies.

The private sector has known for years they must evolve or die. Technology demands it. Customers demand it. Investors demand it. Government, on the other hand, has been able to largely avoid this reality thus far…but those days are numbered. This generation may continue to struggle with thinking outside the box to drastically reform government, but the adults of tomorrow growing up during this technological revolution won’t know any other way.