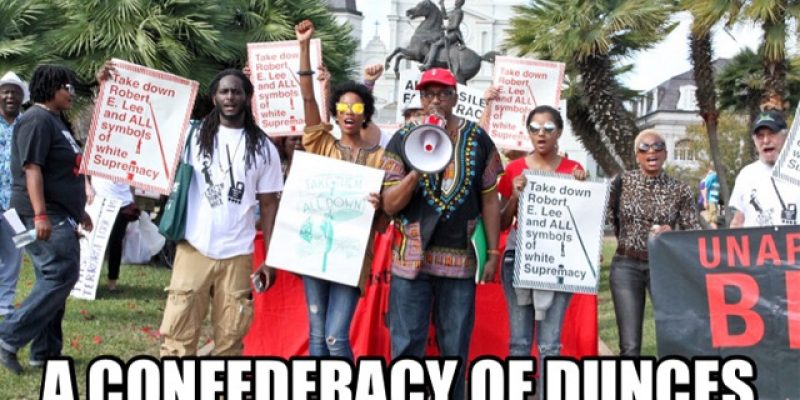 Take Em Down Nola may have aggressive plans in development to rename much of Louisiana. A Hayride reader sent us a list they recently came across that looks to reveal wild expansion plans for the group of activists.

This new list, which appears to be a work in progress, names neighborhoods, parishes, university mascots, and towns in Louisiana such as Belle Chasse, Destrehan, Lafitte, Marrero, and Slidell. It also interestingly names Claude Treme, the namesake of the predominantly black neighborhood Treme, citing that he murdered a slave and owned “34 slaves.”

This is the list as was sent to The Hayride: 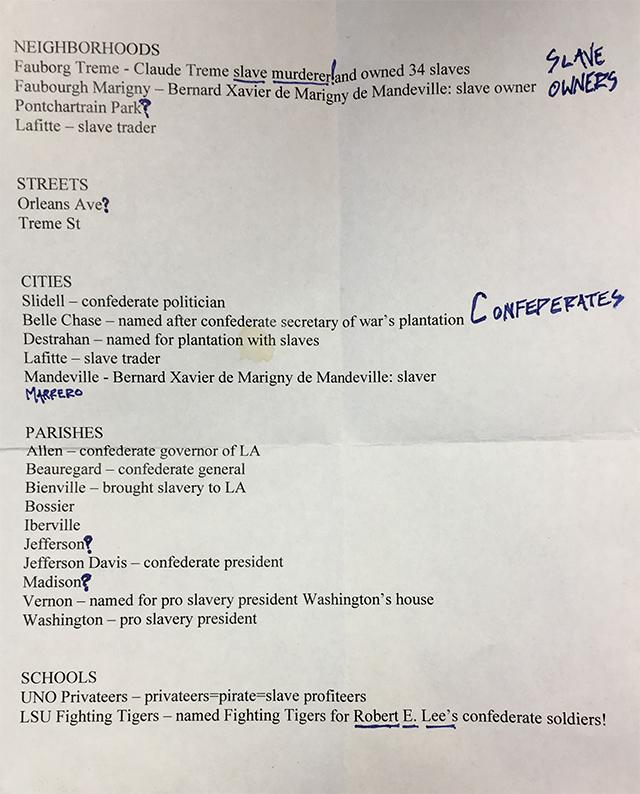 In recent weeks, Take Em Down has appeared to exhibit a more aggressive push, which speaks volumes considering the extreme political correctness movement they have championed. In March, the activist group released an extensive list of hospitals, schools, monuments, and streets in the City of New Orleans that they demand be renamed immediately. This week, frustrated with the lone bidder on the four New Orleans monuments and way over budget, Take Em Down lashed out at Mayor Mitch Landrieu in a statement, saying they “condemn this entirely phony bid-rigging by the Landrieu administration.”

The qualifications to land someone on the Take Em Down removal list seem to be based on slave ownership, the generic accusation of “white supremacy,” and ties to the Confederate States of America. Mayor Landrieu has also echoed similar standards.

“I’m clear that the future does not belong to small, sleepy Southern cities that revere the Confederacy,” Mitch Landrieu has said on several occasions.

Now take a look at some of the comments from Take Em Down leaders Quess Moore and Malcolm Suber:

Iberville, the founder of Louisiana, brought the institution of slavery with him when landed, Quess said in the Times Picayune. “Imported white supremacy should not be paid homage to.”

“I understand that we still have a lot longer to go, a lot further to go, these four, we’ve always been talking about much more,” Quess told WVUE in March 2017.

“We asked for all statues to white supremacy [be taken down] — not just four,” Malcolm Suber of Take ‘Em Down NOLA was quoted by Uptown Messenger.

“If we are serious about taking down these white-supremacist monuments, then we need to take them all down,” Suber told NOLA.com in March 2017.

“We think that there should be a historical reckoning,” Suber told WDSU in March 2017. “We think people should get squared with our history, and we are venerating things that we should not venerate.”

New Orleans Mayor Mitch Landrieu and the City Council will soon attempt to remove four historic monuments with an underqualified contractor and a massive budget void. The Take Em Down coalition has adamantly pushed for their removal as well as a slate of others. With the pending demolition, Mitch Landrieu opened Pandora’s box, and the revision of Louisiana is coming next.   Your state lawmakers can end this once and for all, before Louisiana is turned in to a blank slab by a Confederacy of Dunces.