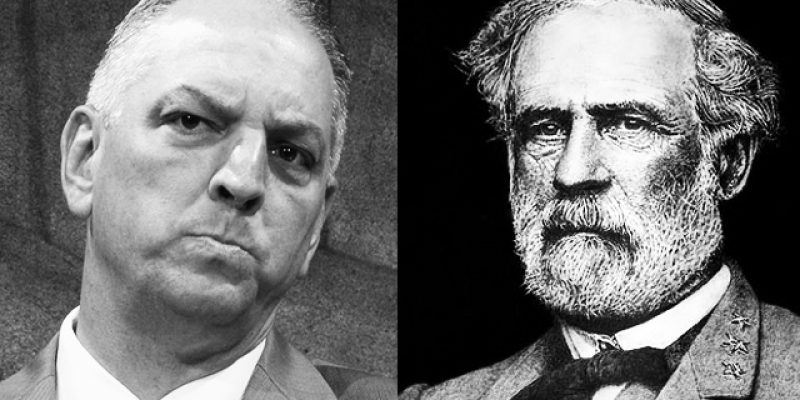 As both a West Point graduate and Louisiana’s governor, Jon Bel Edwards is in a unique position.

Legislation was introduced for the Louisiana Military Memorial Conservation Act to protect plaques, statues, streets, parks, places, and yes, monuments to wars and military veterans from being removed or renamed. Mitch Landrieu, mayor of New Orleans, is preparing to remove monuments to G.T. Beauregard, Jefferson Davis, and Robert E. Lee, an issue so unpopular he is doing it under the cover of darkness. If passed, the legislation would stop the removal—not because of politics—but because of the military and civic careers of these three men.

Beauregard graduated from West Point second in the class of 1838. He served in the Corps of Engineers before distinguishing himself in the Mexican War. In January 1861 Beauregard became Superintendent of West Point, but his tenure was very brief as Louisiana seceded shortly after he filled the office. Only days after the secession, Beauregard was summarily dismissed from his post and removed from the Army; no one bothered to ask his position on his home state’s decision. Beauregard was reportedly so angry at the slight that he joined the Confederate Army, giving rise to the question whether he would even have fought on the Southern side had the option actually been presented to him.

Jefferson Davis graduated from West Point 23rd in the class of 1828. Davis is a veteran of the Blackhawk War and Mexican War. He served in the House of Representatives and U.S. Senate and as the U.S. Secretary of War.

Robert E. Lee graduated second in the West Point class of 1829. He spent 17 years in the Corps of Engineers. He also served in the Mexican War and was the Superintendent of West Point from 1852-1855.

Peers and students respected all three men before and after the War Between the States.

“I am a West Point graduate—the idea that I’m against standards is ridiculous,” Louisiana’s Governor Edwards said about education standards, ultimately establishing himself as principled.

Edwards used his military background—emphasizing his West Point pedigree—while campaigning as a Democrat in the red state of Louisiana. It was part of the appeal for conservatives looking for another political option.

And Edwards’ West Point connection has been and continues to be extensively mentioned. In fact, Edwards’ campaign website’s “About” page still starts with these two sentences: “He is a 1988 Dean’s List graduate of the United States Military Academy at West Point. While at West Point, he was chosen by his classmates as the Vice Chairman of the Honor Committee In Charge of Investigations.”

Louisiana voters get to watch a scene play out where the West Point leader of our state gets to wield his influence and uphold the standards he has been taught—and proclaims—to live by.

Our West Point Alumnus Governor has a chance to save three fellow West Point graduates from posthumous dishonorable discharges. His position on this bill—and ultimately the politically correct clean sweep—will speak volumes to his character.

Please contact the Governor, Lt. Governor, Attorney General, and state lawmakers and ask them to support House Bill 71 to protect the memory of our brave military veterans.