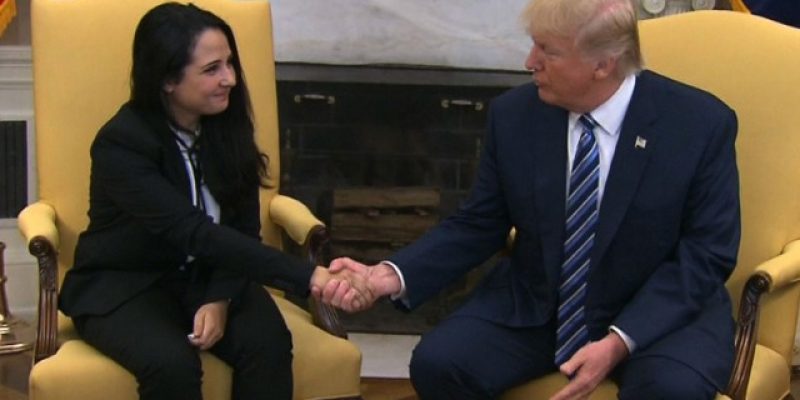 With the release of an American charity worker Aya Hijazi, who was unjustly imprisoned in an Egyptian prison for three years, President Trump’s innovative approach to the Middle East has been vindicated. For weeks, Trump administration officials had been working behind the scenes to secure the release of Ms. Hijazi, her husband and four other humanitarian aid workers. The administration was working to fulfill President Trump’s directive to bring the group back home to the United States.

The negotiations paid off this week when all criminal charges were dropped and the Americans were given permission to leave Egypt and return home to the United States. The President sent his military aide Air Force Major Wes Spurlock to personally oversee the transfer of the former prisoners to American custody. On Friday, the President welcomed Ms. Hijazi to the White House and praised her “great strength” during her time in prison.

Despite the documented ties between the Muslim Brotherhood and terrorism, Morsi was strongly supported by Obama with military hardware and generous financial assistance. The President’s stance toward Egypt changed dramatically in 2013 when the people of Egypt protested in the streets and drove Morsi from power. Currently, Morsi is in an Egyptian prison facing charges of conspiring with a variety of foreign groups to commit terrorist acts.

In his four years in office, President Sisi has aggressively fought terrorist elements in his country. Instead of being rewarded, President Obama shut off all funding and military support to Egypt. Historically, Egypt received military assistance totaling more than $1 billion per year, ranking as the second largest recipient behind Israel.

After four years of icy relations, thankfully, the relationship is improving between the United States and Egypt. Under President Obama, Sisi was banned from the White House, but, earlier this month, he was given a very warm reception by the new administration. President Trump said that the United States was “very much behind” the Sisi government and he praised his Egyptian counterpart for “doing a fantastic job in a very difficult situation.” Once again, the United States is providing military and financial assistance to Egypt. Clearly, this fresh approach toward President Sisi paid handsome dividends with the release of Aya Hijazi, her husband and the other aid workers.

Ironically, during the campaign, Clinton supporters ridiculed Donald Trump for his lack of foreign policy experience. Democrats and their supporters in the media claimed that Trump would lead the United States in a very dangerous direction. Instead, the President has demonstrated impressive skill in navigating the turbulent waters of foreign policy and national security.

He authorized our commanders in Afghanistan to take appropriate action in the fight against Islamic terrorism. Thus, the largest non-nuclear bomb in our arsenal, the dreaded “Mother of All Bombs (MOAB),” was dropped on a network of tunnels used by ISIS terrorists to escape to Pakistan. This successful bombing killed approximately 100 terrorists, but not one innocent civilian.

As South Carolina Senator Lindsey Graham (R-SC) noted, “there’s a new sheriff in town.” Unlike Barack Obama, President Trump is demonstrating staunch support for the military and has requested a spending increase of over $54 billion.

While President Obama waffled over his “red line” in Syria and failed to act, Trump is acting assertively in dealing with the threats in the Middle East. He is also signaling a new approach toward North Korean dictator Kim Jong-un by sending the USS Carl Vinson, a Nimitz-class aircraft carrier, and a flotilla of ships towards the communist nation. President Trump also dispatched Vice President Mike Pence to South Korea to send a strong signal to the North Korean dictator.

In sum, these new foreign policy and military actions by the President are paying serious dividends for the American people. It is refreshing to have a President who no longer will apologize for our country and is not afraid to utilize American military power if necessary. As we discovered during the Reagan administration, the best way to keep the peace is to project American strength. This is a lesson our new President, unlike his predecessor, seems to understand very well