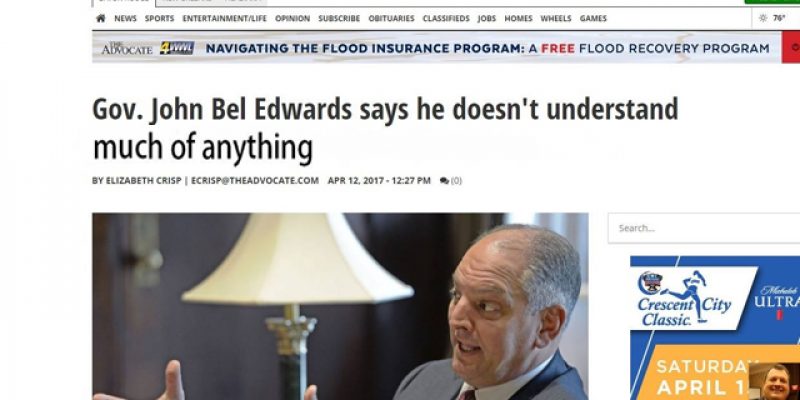 Seems like it’s long past time to stop wasting time, money and effort trying to sue oil companies for coastal loss, seeing as though judge after judge is thoroughly unimpressed with the argument and the oil companies aren’t dumb enough to settle, but that’s a message Gov. John Bel Edwards doesn’t seem to have gotten yet.

Maybe this latest round will penetrate that thick skull of his. From a joint release out of LOGA and LMOGA…

The Louisiana Oil and Gas Association (LOGA) and the Louisiana Mid-Continent Oil and Gas Association (LMOGA) released the following statements upon receiving notification that the United States Fifth District Court of Appeals denied the plaintiffs’s petition for a re-hearing of the Southeast Louisiana Flood Protection Authority – East’s (SLFPA-E) lawsuit against oil and gas companies alleging damages to coastal land. At this point, plaintiffs have exhausted all avenues of litigation, except through the U.S. Supreme Court.

“We are pleased with the panel’s decision to uphold the US district court decision to do away with the SLFPA-E lawsuit. These frivolous lawsuits have contributed to the litigious hellhole we now find our state in.” said Don Briggs, President of LOGA. “This action throws cold water on current litigation against Louisiana’s oil and gas industry.”

“This is just another example affirming our position. As we’ve said from the beginning, these claims are meritless. After countless encounters with lawsuit proponents, I am gratified to see their options at the Fifth Circuit are finished.”said Chris John, President of LMOGA.

In July of 2013, the Board of Commissioners of SLFPA-E filed a lawsuit in Louisiana state court against 97 exploration and production oil and gas companies. The lawsuit alleged that the oil and gas companies’ activities had damaged coastal lands and that they also “increased the risk of flooding due to storm surges and necessitated costly flood protection measures.” The district concluded that on all of the Board’s claims, none of the Board’s stated grounds for relief constituted a claim under state law. The Board then appealed. On March 3rd, 2017 the United States Fifth District Court of Appeals affirmed the district court’s dismissal of the Board’s claim.

“The Southeast Louisiana Flood Protection Authority-East’s baseless lawsuit was tossed out of court for the second time in six weeks and the third time total. We hope that it is ‘three strikes and you are out’ for these meritless lawsuits.

Publicists and commentators for this failed lawsuit fiasco have used the SLFPA-E lawsuit as a forum to unfairly characterize the work of the oil and natural gas industry in our state. They selectively interpret numbers and figures to advance their cause. They also ignore or disparage the industry’s ongoing contributions to the coast to confuse the public about the real causes of the coastal challenges we face and can address by working together.

To grow and prosper, Louisiana needs laws and regulations that give businesses clear parameters for operating successfully and safely in our state. The system needs to be impartial, fair and predictable. Right now, trial lawyers and some politicians are playing a legal lottery where they hope to strike it rich. Thankfully, there are a judicial system and well-meaning businesses and civic leaders who can see beyond these outrages.

A thriving, safely operating oil and natural gas industry creates jobs, produces revenue that fills government coffers and provides the largest stream of consistent funding the state has for working on the coast. It has for decades.

The industry, communities and state and federal governments are working together. The only people missing are trial lawyers.”

The SLFPA-E lawsuit was the big dog among a host of lawsuits filed on behalf of parishes and other local governmental bodies which allege that oil companies are responsible for coastal loss because of canals dug through the state’s southern marshes. There are a number of problems with this theory, of course. First, the marshes are receding overwhelmingly because their existence came from river silt deposited over the southern Mississippi Delta in the spring floods every year; now that the Mississippi has been leveed to its mouth thanks to the Army Corps of Engineers’ heavy-handed response to the 1927 Great Flood, there is no river silt. Perhaps the canals have contributed to the speed of the marshes’ decline, but decline they would thanks to those levees. And second, the oil companies didn’t dig those canals in secret or illegally; they did so after having been given government permits and after having agreed to pay leases and royalties for the oil and gas those canals facilitated. In other words, attempting to charge them for bad deals the state and its local departments made not under duress is the very definition of bad law.

Which is why judge after judge, including the three Fifth Circuit appellate judges who denied a rehearing in the SLFPA-E case yesterday, have tossed these suits every chance they’ve had.

And in the meantime, the oil and gas business has responded to their presence by avoiding doing business in Louisiana every chance they’ve had.

But that didn’t stop Edwards from putting together a “dream team” of plaintiff lawyers under the supervision of his PAC chairman and chief bundler Taylor Townsend to facilitate more coastal lawsuits. The strategy being that they’d pressure the oil companies into coughing up billions of dollars, which would generate monster legal fees for Edwards’ cabal of lawyers just in time for some hefty re-election checks in return.

Except that scheme is already a colossal failure, and its only real effect has been to cost Louisiana oil and gas workers hundreds if not thousands of jobs without much prospect of recovery in the near term.

We’ve said this before and we’ll continue saying it – at the rate this is going, Louisiana voters by 2019 will consider a past dalliance with hookers a requirement for the job of governor rather than a disqualification.

Interested in more national news? We've got you covered! See More National News
Previous Article The Baton Rouge Metro Council Republicans Smarten Up And Expose The COA’s Crooked Defenders
Next Article It Had To Be Trump Who Would Drop The Mother Of All Bombs On ISIS