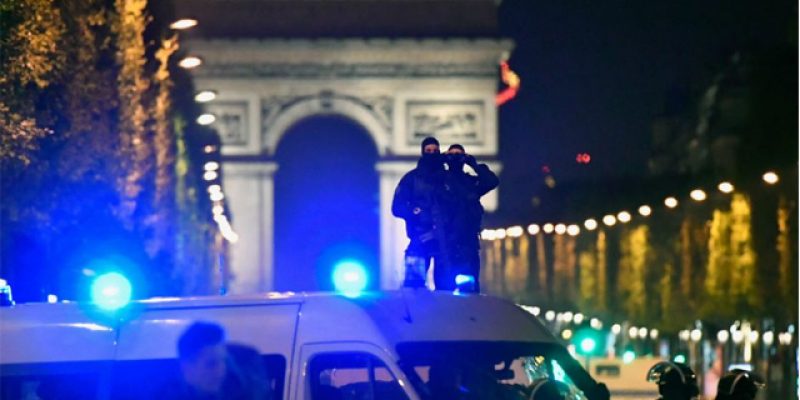 Way back in February of 1998, Osama Bin Laden declared a Jihad against Jews and Crusaders in a written document entitled the “World Islamic Front Statement.”

In that document he specifically stated:

Despite this, with just a few notable exceptions over the years, few Muslims answered Bin Laden’s call to kill Americans.

Bin Laden was of course killed by U.S. Special Operations forces in May 2011.

Since then, we have seen many more attacks here in the U.S.

Why? If Osama Bin Laden was not able to inspire Muslims to attack and kill Americans, why are we seeing so many such attacks in recent years? Such as:

These are just a few of the incidents in recent years, here in the United States, that have, unfortunately, been categorized as “lone wolf” terrorist attacks by our recalcitrant news media.

What we are seeing are in fact individual acts of Jihad–acts of war, not criminal acts. We continue to deny this at our peril. There is a doctrinal basis for the enemy that is waging war against us. This form of warfare does not require formal ties between fighters or units (organizations) waging the war.

The concept of Jihad being an individual obligation is longstanding and has its basis in mainstream Islamic law (Shariah). We can see this from a widely-read and used text of Shariah sold annually at the convention of the Islamic Society of North America (ISNA), the largest Muslim organization in the United States, which was named as an unindicted co-conspirator in the largest terrorism financing prosecution in U.S. history: the U.S. v the Holy Land Foundation. In that trial, ISNA was identified as a Muslim Brotherhood front group. Interestingly, ISNA’s Canadian wing was shut down in 2013 for funneling money to a Jihadist terrorist group in Kashmir.

Volume One of this work has a chapter devoted to Jihad. On page 473, the basis in Shariah for individual Jihad is explained in detail and reveals for us why we are seeing this escalation of attacks:

For a Muslim, there are certain cases in which jihad is an individual duty:

2) When enemies attack a Muslim country…

3) When a Muslim is needed to help his fellow Muslims fight their enemies.

4) When a Muslim is called by the ruler (or the one in authority) to fight in the Cause of Allah, for the Prophet (PBUH) said:

Whenever you are called for fighting in the cause of Allah, you should go immediately.

As you can see, these four circumstances are quite broad and all could be interpreted as existing right now. But numbers 2, 3 and 4 are particularly relevant right now and serve as the doctrinal basis for why Muslims have suddenly begun rising up in violent Jihad in the West:

And that is why the U.S. and the West cannot tolerate the existence of the Islamic State over the long-term. It has become the flame attracting moths. It will only gain more legitimacy and strength if it is allowed to persist. In short, it must be destroyed.

HERE ARE TWO IMPORTANT PASSAGES THAT APPLY TO WHAT WE ARE SEEING TODAY. The news media and our elected officials seem to take comfort when an attacker was “merely inspired” by the Islamic State (ISIS) and were not directed by the Islamic State. The opposite should actually be the case, as reflected by the two remaining passages below from two important Jihadi ideologues:

Individual jihad has recurred throughout Islamic history. In the time of the Crusades…groups of mujahideen responded to the crisis. Many isolated expeditions and groups carried out the obligation of jihad.

Individual jihad using the method of urban or rural guerilla warfare is the foundation for sapping the enemy and bringing him to a state of collapse and withdrawal. It will pave the way for the desired strategic goal.

What mandates these methods as a strategic opinion is the imbalance of forces between the resistance and the large invading alliance of unbelievers, apostates and hypocrites.

We fight them for the sake of incidents to cause political pressure and psychological collapse, so that they leave our lands. Carrying out a small operation every month against the enemy will have more of an impact on him than a big operation every year or two.

Successful jihad will only happen within an ummah [Islamic nation or community] in which the fighting creed is firmly established and clarified. This must happen in order to attain the “Revolutionary Jihadist Climate” that will spontaneously give rise to instruments of resistance.

Violent jihad is as an individual duty obligatory upon every Muslim. All the ulema have said this…”

These two passages reflect what we are seeing today, not just in the USA, but even more so in Europe, as evidenced by the March 2017 London parliament shooting and the 20 April 2017 police shooting on the Champs Elysees.

Over a decade ago Al-Hakaymah called for frequent, small-scale attacks rather than big 9/11 type attacks. What we are seeing today was clearly part of the Jihadists’ plans.

Again, well over a decade ago, Al-Suri foresaw an environment in which individual Jihadis would rise up spontaneously in resistance without specific direction and planning from a higher, central authority. Again, that is clearly what we are seeing today.

This “Revolutionary Jihadist Climate” spontaneously giving rise to instruments of resistance is NOT something to take comfort in at all. It is problematic for law enforcement and the intelligence community and dangerous for Americans.

A terrorist cell connected directly in some way to Al Qaeda leadership can be detected, infiltrated and taken down as it communicates with and receives orders from commanders overseas. But individual Jihadis or Jihadi couples who have the intention of carrying out attacks are much more difficult to detect and are very nearly impossible to infiltrate.

The “Revolutionary Jihadist Climate” spontaneously giving rise to instruments of resistance is a relatively new, dangerous phase in the global Jihadist movement.