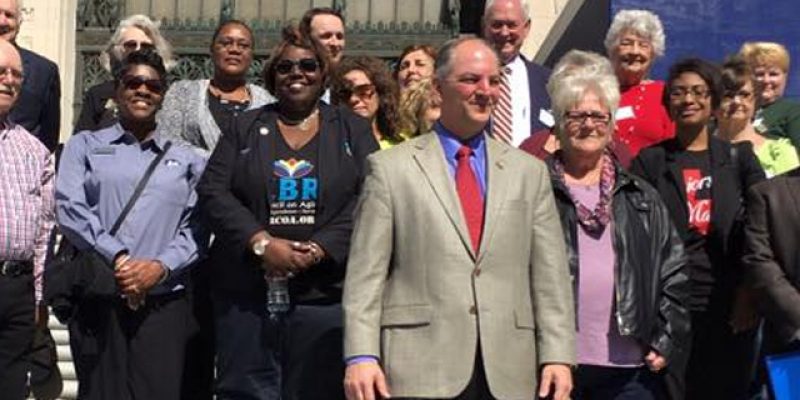 …came from a vote today in the House Municipal, Parochial and Cultural Affairs Committee. A bill sponsored by three Baton Rouge Republican state representatives – Franklin Foil, Paula Davis and Steve Carter – which would have changed the makeup of the East Baton Rouge Council On Aging board and reformed how its membership was selected – died on a party-line 8-7 vote.

Currently the board has 15 members, and the bill would have shrunk that number down to nine. It also would have given the Capital Area United Way, AARP and local elected officials the opportunity to appoint board members, with the Metro Council and Mayor-President Sharon Weston Broome seeing their allotment slimming down to two members each.

Given the spate of intensely negative news stories coming out of the East Baton Rouge Council On Aging, you’d think the people supporting it would be willing to allow for some changes – if for no other reason than to take the heat off.’

But you would be grossly mistaken, because that isn’t what happened. Instead, it was war in that committee room.

But Reps. C. Denise Marcelle, a COA board member, and Pat Smith, both Baton Rouge Democrats, called the effort “divisive,” and opposed the bill along with roughly a dozen seniors who attended the committee. Two seniors who are clients of the COA testified, along with the agency’s chief operating officer, Shontell LeBeouf. Marcelle did not recuse herself from the vote, despite the fact that she serves on the agency’s board.

“The elephant in this room is the tax. No one ever came to the Legislature to restructure the board until they passed a tax,” Marcelle said, referring to the 2.25-mill property tax voters passed last November to more than double the COA budget.

The COA has been under fire over the past several months for potentially illegal campaigning for the tax. In addition, its executive director, Tasha Clark-Amar, is embroiled in a legal dispute with family members of a now deceased former client, who allege Clark-Amar swindled their grandmother into making her the overseer of her will. The arrangement would have paid Clark-Amar $500 per month over the next 20 years.

The Legislative Auditor’s Office earlier this week released an audit that said the COA likely broke laws in its campaign for the tax. East Baton Rouge Parish District Attorney Hillar Moore III’s office is reviewing the findings and will decide whether to bring criminal charges.

We’ve made the case for this over and over, and the evidence keeps mounting that it’s true. The East Baton Rouge Council On Aging is nothing but a corrupt political machine to benefit the Louisiana Democrat Party and the members of the city’s ruling political cabal – of which Pat Smith and Denise Marcelle are prominent members along with state senator Regina Barrow, who as the Baton Rouge Business Report noted earlier this week had written a letter asking for an Attorney General’s opinion on whether East Baton Rouge Council On Aging director Tasha Clark Amar and her staff were permitted to run a political action committee and engage in other campaign activities in favor of the tax. The answer that came back was absolutely not, and Amar did it anyway.

That’s the level of arrogance at play here, and the iron commitment to force Tasha Clark Amar, and that tax, down the taxpayers’ throats.

They’re doing it, and defending it to the death, because they know that catching $8 million in property tax revenues every year will allow the East Baton Rouge Council On Aging to bus thousands upon thousands of senior citizens to Democrat precincts on Election Day, and to early voting locales in unprecedented numbers. With those hordes of aging Democrats dragooned to the polls, the parish’ ruling cabal will have an unbeatable electoral advantage, particularly in low-turnout elections (think, especially, “future tax elections”), and it’ll only be a matter of time before East Baton Rouge Parish becomes the new Orleans Parish.

That’s the plan, at least, and Smith, Marcelle and Barrow are fully committed to it. One wonders what Tasha Clark Amar would have to do in order to make them jump ship – so far she hasn’t come within sight of that threshold.

Interested in more news from Louisiana? We've got you covered! See More Louisiana News
Previous Article Monumental Task Committee Proposes Compromise On Confederate Monuments
Next Article If You’re Furious About What Mitch Landrieu Is Doing, This Might Be For You…