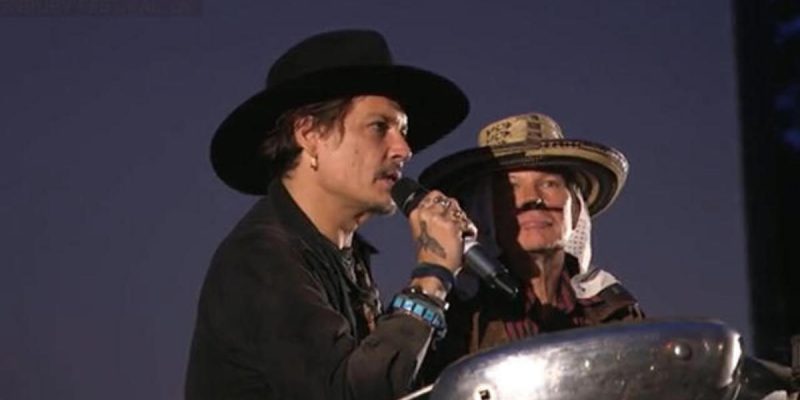 It is getting extremely difficult to keep track of the ever increasing number of fading Hollywood stars threatening to harm or kill President Donald Trump. The latest outrage occurred when overrated actor Johnny Depp joked about assassinating the President at a U.K. music festival. He asked the crowd “When was the last time an actor assassinated a President?” This was obviously a reference to actor John Wilkes Booth who assassinated President Abraham Lincoln. He dug an even deeper hole when he followed his question by making a thinly veiled threat on the President’s life.  Amazingly, he told the crowd, “it’s been a while, maybe it is time.”

For these remarks, Depp should be visited by the Secret Service and possibly charged with threatening the life of President Trump. It is a Class E felony; punishable by up to five years in prison and/or a fine.

Depp’s ravings follow a string of outrageous antics by radical leftists. In just the last few weeks, a Trump assassination play was staged in New York City, comedian Kathy Griffin was pictured holding a decapitated head of Donald Trump, actor Jim Carrey joked about bashing the President with a golf club, rapper Snoop Dogg produced a video with a Trump clown being shot and actor Robert DeNiro expressed a strong desire to punch the President in the face.

With all of this happening in quick succession, it might be time for the Secret Service to create a special branch devoted to investigating angry Hollywood stars. It has been clear since he announced for the presidency that the vast majority of Hollywood stars hate President Donald Trump. This nasty attitude is apparent almost every time one of these celebrities is interviewed by the media. They also use their platform on awards shows to blast the President on everything from his plans to build a border wall to his desire to repeal and replace Obamacare.

These leftists still can’t get over Hillary Clinton’s loss in the November 2016 presidential election. Many of them, like Miley Cyrus and Katy Perry, were active in her campaign and even cried when she lost.

For these Hollywood stars, the pain of losing in November has been compounded by the aggressive agenda of President Trump. The celebrities have become frantic to stop the President, so they regularly attack him on social media. In addition, they have become involved in the recent special elections, such as the race to elect a new congressional member for the 6th district in Georgia. Actor Samuel L. Jackson starred in a radio commercial for the Democrat candidate Jon Ossoff. Other celebrities such as Rosie O’Donnell and Alyssa Milano contributed to Ossoff’s campaign.

Unfortunately for the Hollywood Trump haters, they lost again. Despite having a huge financial advantage, Ossoff was handily beaten 52-48% by GOP candidate Karen Handel, the former Secretary of State in Georgia.

Toward the end of the race, even Democrat activists had to admit that Ossoff had several significant problems as a candidate. It hurt him politically that he did not live in the congressional district. His youthful age, 30 years old, and his profession as a documentary filmmaker might also have given some voters pause. However, the real issue was President Donald Trump. Voters who supported his agenda did not cast a ballot for Ossoff. In fact, during her victory speech, Handel received the loudest applause when she thanked the President for his help.

One of the best parts of Karen Haindel’s victory on Tuesday night was the stunned reaction from Hollywood stars who invested so much in the race. The reaction on social media was priceless. Actor Billy Eichner lashed out at Handel, calling her “terrible,” “homophobic.” Actress Debra Messing tweeted that the results were “hard to process.”

Poor Debra, the results were not hard to process at all. Voters throughout the country are once again rejecting the radical leftist and hateful message of Democrats and their Hollywood allies and voting for Republican candidates who are vowing to support President Donald Trump. Since Election Day 2016, Republicans are 5-0 in special elections.

Despite Hollywood revulsion and mainstream news media bias against the President, he keeps winning these special elections. On Wednesday morning the President enjoyed a victory lap and tweeted that “All the Fake News, all the money spent =0.”

The reason that the President and Republicans are winning these elections is that voters want to see action on the serious issues facing the country. All the Democrats are offering is a loathing of Trump, an obstruction of his agenda and a constant obsession with the “Russia investigation.”

Most Americans are more concerned about rising healthcare costs, border security, tax cuts, wage growth, infrastructure improvements than the “Russia investigation,” which has no tangible impact on their lives.

If Democrats continue their hate campaign against President Trump and focus on the “Russia investigation” they will continue to lose special elections and become an even smaller minority party. When that happens, Democrats can thank many leftist groups, including their most vocal cheering section, Hollywood stars.