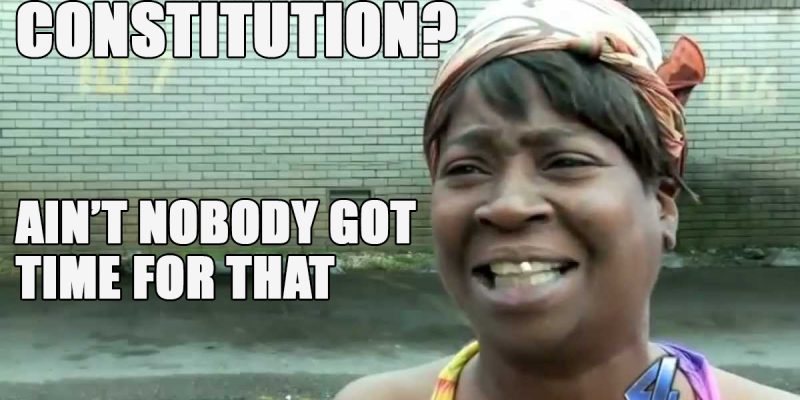 The Louisiana State Bar Association, the mandatory trade group that all Louisiana lawyers must belong to, met in Sandestin, Florida this week to take classes, carry on important lawyer work of some sort, and hold a meeting of its House of Delegates, of which yours truly proudly represents the 8th Judicial District in and for the Free State of Winn.

Yet, the majority of that House could not find it in themselves to support the most basic law of the land: the first amendment.  The fight came over a resolution by past LSBA president, noted Lafayette attorney, and all around good guy James Davidson.   The whole idea was to create a section of the bar association where members could have a forum to discuss the First Amendment.   Earlier this year Davidson proposed a section organized around Judeo-Christian values, but pulled the resolution from consideration after requests from several colleagues in order that they might study the matter more fully.  Apparently Davidson and lawyers from the other side met, talked, negotiated, etc, and decided that a section to promote the first amendment would be a better alternative.

That sounded like a fair compromise.  After all, the first amendment protects Judeo-Christian values along with all the rest.  A section to monitor advances in this area of the law would be an added benefit to the practice of law.

Plus, it’s not a big deal to have a section in the Bar Association. By my count there are 30 sections listed on the state bar website,  including such legally-meaty sections as the “animal law section,” the “art, entertainment and sports law section,” and of course the “minority involvement section.”

So it should not be a big deal to have a first amendment section, right? After all, we have a number of sections dealing with very specialized and arcane areas of the law. Surely a section dealing with one of the most fundamental basic rights enjoyed by Americans would easily garner the approval of the esteemed bar association?

This shouldn’t be too surprising.  After all, this same group last year adopted a resolution which urged the repeal of all constitutional amendments, laws, regulations and rules or practices that denigrate or discriminate against LGBT individuals.  The First Amendment protects speech, even speech wchich denigrates LGBT individuals.  Several speakers mentioned this at the meeting last year, indicating that passing the resolution would be urging the repeal of the First Amendment.  The LSBA did it anyway (I voted against that one, by the way). I suppose once you’re on record as supporting the repeal of the First Amendment, you don’t really need a section supporting it.

The shameful part is that the LSBA is a mandatory organization. Lawyers in Louisiana don’t have a choice: they have to join.  And they have to pay these people money each year so they can have meetings in Sandestin to vote against the First Amendment. It appears to be high time that change.  When the governing body of lawyers can’t even support a section dealing with the First Amendment, it ceases to be a legitimate representative of those lawyers.

Interested in more news from Louisiana? We've got you covered! See More Louisiana News
Previous Article APPEL: The Stalemate At The Legislature Was A Victory For Louisiana, Not A Defeat
Next Article FAGAN: What City Leaders Refuse To Admit About Out Of Control Violence In New Orleans