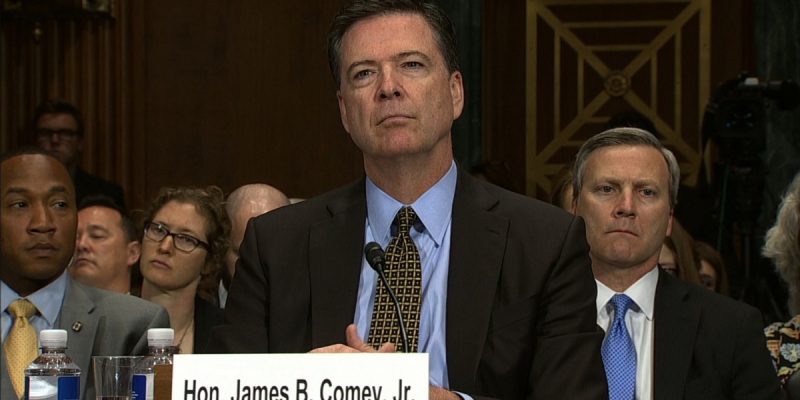 I really don’t care what Comey has to say.

Our readers know, to the consternation and disapproval of many of you, that I have no special brief for Donald Trump. I didn’t like him when he ran for the Republican nomination, I only grudgingly supported him in the general election when it became clear to me the third-party candidates were ridiculous, my joy at Trump’s victory was almost solely due to the unexpected pleasure of seeing Hillary Clinton lose and since the election what support I offer to Trump is mostly driven by a total rejection of the Left, which teeters very near the edge of outright revolution against our constitutional system.

But James Comey is a weasel. He’s a careerist jackass who, if he’d had any integrity, would have resigned in protest the minute Loretta Lynch met Bill Clinton on that tarmac in Phoenix. That meeting made a mockery of any sense of an independent investigation into Hillary Clinton’s lawbreaking, and there were no circumstances moving forward from it in which Comey could have run that investigation without being seen as trying to put the fix in one way or the other.

And as it happened, both sides saw Comey as trying to fix the election. It was a matter of time before he got fired. Five minutes before Trump fired him every Democrat in Washington was calling for his head, and five minutes after Trump let him go they were calling him a martyr to the cause of justice. The whole thing has been a farce ever since that meeting on the tarmac.

James Comey could have gone out as a man of principle. Instead he’s trash. That’s what happens when you value your job more than your soul, which is true of almost everybody who makes a career in government that I’ve seen (and for government jobs, no less!).

Fundamentally what you need to know about Comey is that on three separate occasions he confirmed to Trump that Trump was not the subject of an FBI investigation, but refused to state that fact publicly.

This after Comey had gone public to say that Hillary Clinton was clear of prosecution when there was evidence she had broken the law. Which was precisely the opposite of what he should have done; either he should have kept his mouth shut and respected long-standing tradition that you don’t go public and blast someone whom you’ve decided not to prosecute, or he should have gone full-steam ahead with a recommendation she be indicted and if that meant he got fired so be it. By announcing that what Hillary did was illegal and then concluding the investigation, a position which he then had to reverse in October when more of Clinton’s e-mails turned up on a computer seized by the feds in a probe of Anthony Weiner’s interstate online sexual perversions, Comey did the indefensible.

And from Trump’s perspective, Comey had been telling him he wasn’t being investigated for any collusion with The Russians, a concoction of Beltway Democrats and the partisan Left media without any factual basis to date, but yet refused to go public with that fact. After he’d gone public and legally exonerated Clinton, who had been the subject of an investigation which had already found wrongdoing. Trump’s request to clear the decks on something which had allowed his political enemies to hang a cloud over his administration could hardly be seen as inappropriate given Comey’s past conduct.

Instead, it’s quite clear Comey tried to hold the public cloud of the Russia investigation over Trump’s head as some sort of guarantee of his own employment. Trump fired him for that – as any executive worth his salt would do.

If I could find it on YouTube – I looked, and it wasn’t there, which is a damn shame – I would include a perfectly appropriate clip from this past season of Billions that describes what Comey tried to do to Trump. That show, which might be the best thing on TV, stars Paul Giamatti as Chuck Rhodes, a hopelessly corrupt U.S. Attorney for the Southern District of New York who engages in a tyrannical crusade against Wall Street players and hedge fund billionaires in an attempt to make a name for himself by putting big-money titans in prison.

Rhodes is about to be fired by the Attorney General in Washington, who has dispatched a hotshot investigator from Main Justice to bury him for some sleazy dealings he’s been involved in. His response to his impending sacking is to publicly launch an investigation into a major hedge fund with ties to the president – so that if he’s then fired, it’ll look like the White House is covering up the foul deeds of its friends. That gets the Attorney General to back off his case.

Which completely describes the game Comey played with Trump. That’s a game that has been played over and over again. It works like a charm with career politicians; it didn’t work at all with Trump, who for all his many faults comes from the real world and knows the last thing you ever want to do is bullshit a bullshitter. Trump rightly fired Comey and couldn’t care less about the Beltway fallout from it. Good for him.

So no, I don’t care what Comey has to say. Comey is garbage. It’s time to move on.